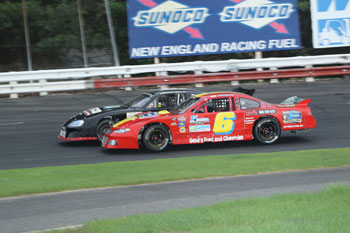 (Stafford Springs, CT)—For Stafford Speedway Limited Late Model driver Jeremy Lavoie, the 2018 season has served as a breakout year. Lavoie has doubled his previous career high for wins in a season with 8 and he enters the Sept. 14 First Responder Friday / Final Friday Night Shoot-Out program on the verge of becoming the 2018 Limited Late Model champion. In order for Lavoie to clinch the championship, he must finish in front of R.J. Surdell and no more than 4 positions behind Ryan Fearn in this Friday night’s Limited Late Model 20-lap feature event.

“This would be the biggest achievement of my life and for my family as well,” said Lavoie. “They’ve been racing since the ‘70s and they’ve won a lot of races but haven’t been able to secure a championship yet. If we win the championship, it would mean everything to me and my family. My grandfather is in his 80’s and he’s seen everyone in the family race from day 1 so he’s pretty excited. It’s been a lot of fun this year. I can’t thank Aspen Hill Farm, L & S Equipment, Gene’s Ford And Chevy, P2 Perry’s Powder Coatings, and Delivery Solutions, LLC. enough for all their support this season. I also have to thank my whole family for sticking behind me, believing in me, and helping me do the best I can every week.” 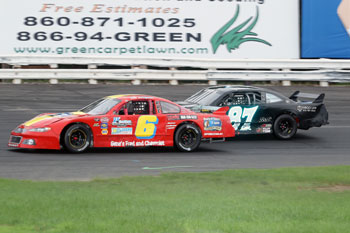 As strong as the 2018 season has been for Lavoie and the #6 team, their year got off to the worst possible start as a mechanical issue eliminated Lavoie from the season opening NAPA Spring Sizzler feature event and left him with 20 point deficit. Lavoie rebounded from that misfortune in grand fashion, scoring 4 wins in the next 5 races following the NAPA Spring Sizzler to vault himself to the head of the Limited Late Model standings. Lavoie and Ryan Fearn then took turns leading the standings during June but Lavoie took a firm lead in the championship race with a 6-race stretch from June 29 through August 3 that saw him score 4 wins and 2 second place finishes.

“It was a bad start to the season but we knew it was going to be a long season,” said Lavoie. “We rebounded from that and we just tried to make the car the best it could be each week. I’d say the secret to our success was grasping the handle of the car early in the season and work with that and make it better. We made the car consistent for 20 laps every week and it’s showed with 12 podiums in 19 races. It’s a whole family effort with everyone putting in long hours at the shop and we’re all happy with how things have gone this season. We never tried to look too far ahead and we took things race by race this year.”

With only 2 races left, Lavoie and his team are focused on putting a solid bookend on what has been the best season of his racing career. 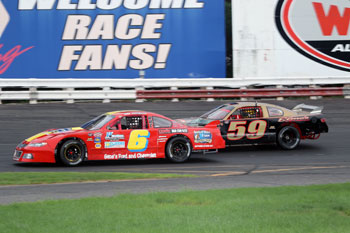 “We’re going to stick with our same game plan we’ve been going with all season long,” said Lavoie. “We’ve been fine tuning on the car every week to make it better because as the season has gone on everyone else has gotten quicker. That only makes us work even harder to keep up. Even though we have 8 wins, anyone in the division can win on any given Friday so we’re going to give it our all and bring the best race car that we can to the track for these last 2 races.”

Tickets for this Friday night’s First Responder Friday / Final Friday Night Shoot-Out program are priced at $18.50 for adult general admission, $5.00 for children ages 6-14, and children ages 5 and under are admitted free of charge when accompanied by an adult. All First Responders with proper I.D. can get a general admission ticket for only $10. Reserved seat tickets are $20.00 for all ages. All ticket prices include 10% CT Admission Tax. Stafford Motor Speedway offers plenty of free parking along with overnight parking available for self contained Recreational Vehicles.

The 46th Annual NAPA Fall Final Weekend will close out the 2018 season on the weekend of September 29-30. Tickets may be purchased by calling the speedway office. Discount tickets are available through participating NAPA stores.