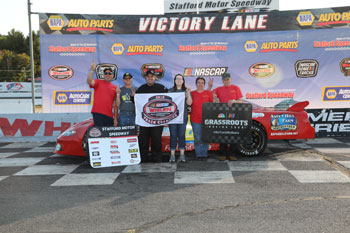 (Stafford Springs, CT)—After a season long duel between himself and Matt Clement, Jeremy Lavoie’s third place finish in the season ending NAPA Fall Final feature was good enough to win the 2019 Limited Late Model track champion. The Windsor Locks, CT native and driver of the #6 L & S Equipment Ford opened the 2019 season with a victory on May 4 to put himself at the top of the standings but would only hold the top spot for 3 weeks throughout the summer months. Lavoie took control of the points race following the August 23 feature event and he led the standings for the final three races of the season to clinch his 2nd consecutive Limited Late Model championship.

“If you had ever told me I would one day win a championship, maybe I might’ve won once, but to go back to back is unbelievable,” said Lavoie. “This is like a dream come true. It’s still so surreal, it doesn’t feel like we did it.” 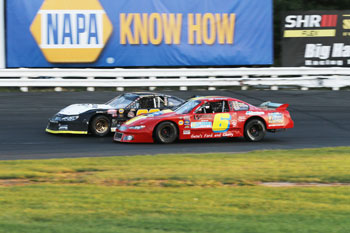 Lavoie put his second consecutive championship into perspective when he reminisced about making the move into the Limited Late Model division in 2014 after racing in Stafford’s Street Stock division from 2012-2013.

“If I could show you a photo of when we first bought this car back in 2014, it was in mud,” said Lavoie. “We built it from the ground up and for us to now be standing here as back to back champions, I wouldn’t have believed you if you told me that. I have to hand it to my crew. I sit in the trailer and tell them what I want and they go and do it and it’s up to me to bring the car to the front.” 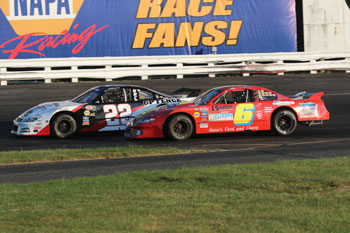 Behind any championship winning driver is a great crew as well as great sponsors and Lavoie acknowledges that he couldn’t have found the success that he’s found the last 2 years with back to back championships and 13 wins in those seasons.

“My family, my father and my sister, they stick behind me 100% so I have to thank them and all my sponsors,” said Lavoie. “They’re a great support group and they all help me come out here and perform my best every week. I definitely wouldn’t be here without them and their support. Back to back championships is really hard to do, no matter what division you’re in. Thanks to L & S Equipment, Aspen Hill Farm, Gene’s Ford and Chevy, P2 Perry’s Powder Coating, Delivery Solutions, LLC., Ranco Collision Repair, Kobos Landscaping, the track, NAPA Auto Parts, R.A.D. Auto Machine, and Sunoco. Stafford is a great facility to race at and we really enjoy coming here every Friday night. Hopefully we put on a great points race for all the fans this season.” 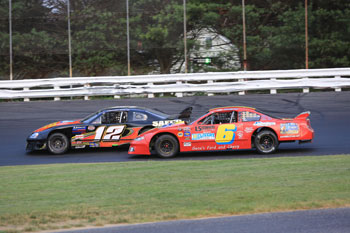 With Lavoie joining Duane Provost as the only drivers to win back to back championships in the Limited Late Model division, Lavoie has his sights set on making Stafford Speedway history by becoming only the second driver to ever win three consecutive championships, joining Norm Sears, who won the Street Stock title from 2006-2008. Lavoie will also be looking to become the first 3-time champion in the Limited Late Model division as he is currently tied with Provost and Kevin Gambacorta.

“We’ll be ready for the banquet to see everyone all cleaned up and then we’ll get started tearing the car apart and getting ready for next season,” said Lavoie. “We’re going to come back next year 100% and try to see if we can make it three in a row. You shoot for the sky and see how far that takes you.”

Lavoie will officially be crowned the 2019 Limited Late Model Champion at the 50th Annual Stafford Speedway Champion’s Awards Banquet, scheduled for Friday, November 15 at Maneeley’s in South Windsor. Tickets to the awards banquet are $50 and are on sale now. Tickets can be ordered by calling the track at 860-684-2783 or they can be ordered online at www.staffordspeedway.com.