Jimmy Blewett Comfortable With New Car at Stafford For Starrett 150 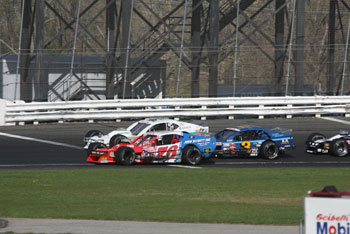 (Stafford Springs, CT)—Although his home track is Wall Stadium, over the years NASCAR Whelen Modified Tour driver Jimmy Blewett has felt right at home racing at Stafford Speedway. Half of Blewett’s 6 career NWMT wins have come at the Connecticut half-mile facility and he will be looking to add to that total in this Friday’s Starrett 150. Blewett will be behind the wheel of his familiar red, white, and blue family owned #76 Starrett Racing machine, but he will be bringing a new SPAFCO chassis to Stafford for the race.

“I’m excited for the Starrett 150,” said Blewett. “Stafford is definitely one of my favorite tracks and I feel like it’s always one of my strong points. One thing going into the race is that we’re bringing a new SPAFCO car for this race and I feel very comfortable bringing a new car to Stafford. This will be a whole new ball game for me but there’s nothing like a good challenge. Last Saturday was my 15th win with the new chassis and so far we’ve only lost 4 races with it. It’s a good car and I’ve built up a great relationship with Kenny Barry and everyone at SPAFCO. I feel like we’ve found something the last 3 or 4 races we’ve run and we can definitely apply some of that for the Stafford race.” 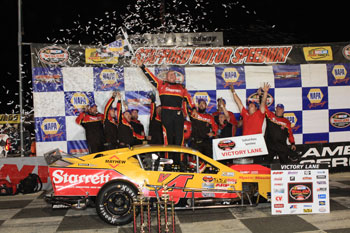 Blewett has three career Stafford victories and 2 have occurred in the August tour race. His most recent NWMT victory came back in 2016 at Stafford with Starrett as a sponsor of the Bob Garbarino owned #4 car. Blewett would like nothing more than to repeat that victory in the Starrett 150.

“Starrett has been behind me since I ran the #4 car and to come to Stafford and represent them with my red, white, and blue colors on the #76 family car, it’s something special,” said Blewett. “I’m looking to unload the car fast, qualify faster, and hopefully pull off a win. This is basically a home race for Starrett and with all they do for motorsports, not only myself, it would be good to win this race.”

In addition to his drive to win because of his connection with Starrett, Blewett can also find motivation from his car owner and grandfather, John Blewett, Sr.

“I’d say no pressure but my grandfather said to me last week, ‘From here on out, you owe me a win in the family car on the Tour. I need a win.’” said Blewett. “Our main focus is getting a win for grandpa.” 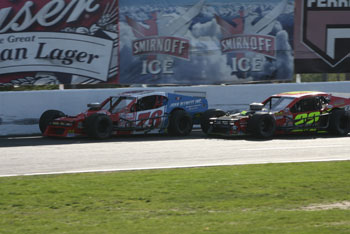 With Blewett running a limited schedule this season on the NASCAR Whelen Modified Tour, he can afford to take chances that regular drivers who are in the thick of the championship race might not consider making during the Starrett 150. With teams allowed to change only one tire per pit stop, Blewett can also afford to go a different route with his pit strategy than what the majority of the field.

“The guys who are running for points, when it comes down to the end of the race, they know if I’m up there and I have nothing to lose, they’re going to think twice about racing with you,” said Blewett. “At the same time I have to race those guys with as much respect as possible because I’ll be racing against them at future races. With pit strategy I feel like I’ve always been better on the long green runs so look to see me stay out for a while and maybe come in towards the end of the race for tires. The one tire deal throws a curveball at everyone and I think it makes the race much more exciting. All I can say is don’t count us out.”