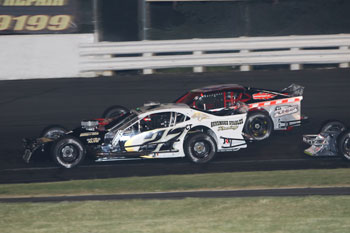 (Stafford Springs, CT)—Since beginning his modified career in Stafford Speedway’s SK Light division in 2010, Waterbury, CT native Joey Cipriano has steadily climbed the ladder up the modified chain. Cipriano is now a regular in Stafford’s premier SK Modified® division and he also has made select starts in the Valenti Modified Racing Series and Stafford’s Open Modified events over the past several seasons. Cipriano will climb to the highest rung on the modified ladder when he makes his NASCAR Whelen Modified Tour debut at the 48th Annual NAPA Auto Parts Spring Sizzler®, April 27th and 28th. Cipriano will pilot the #19 Gunsmoke Stables Racing car owned by Steve Greer, who Cipriano has teamed up with previously to run Open Modified and VMRS events.

“From when I first started racing SK Lights, I would always look down to the other end of the paddock area where the Tour cars were parked and that’s where you wanted to be as a driver,” said Cipriano. “I finally have that opportunity and can’t thank Steve Greer, Earl Pelletier, and everyone at Gunsmoke Stables Racing enough for having faith in me to say let’s try our hand at Stafford.”

Cipriano and the Gunsmoke Stables team recorded three top-8 finishes in four starts last season at Stafford in the Open Modified and VMRS races. Cipriano might have made it four for four in top-10 efforts if not for getting caught up in a multi-car wreck one lap after a restart in the May VMRS race. The Cipriano-Gunsmoke combination will bring a new car to the NAPA Auto Parts Spring Sizzler®. 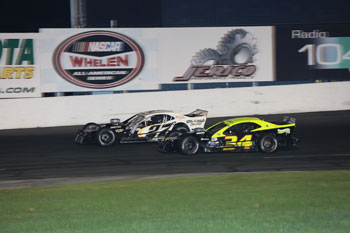 “Steve purchased a car from Flamingo Motorsports over the winter with a Bob Bruneau NASCAR Spec Engine so we’ll have a totally different package from what we ran last season in the Open Mod and VMRS races,” said Cipriano. “Last year we came to Stafford and we ran really well. Steve and his guys always bring good equipment to the track and knowing that we’re going to go to the top level of modified racing with top notch equipment is exciting. It’s one of those things that you always dream of, an opportunity like this to race at the Whelen Modified Tour level with equipment you know is capable of winning.”

For his NWMT debut, Cipriano is looking to continue the success he’s had in his previous Tour-type modified starts at Stafford but will be facing a new set of variables. Cipriano will be leaning on his 8 seasons of SK Modified® and SK Light experience at Stafford as he will have to contend with a race that is twice the distance of the longest race he’s ever ran. Cipriano and the Gunsmoke team will also have to determine their pit strategy as NWMT rules only permit one tire change per pit stop.

“It would be great to show up and win the race like Kyle Bonsignore did at the Fall Final last year, but realistically a top-10 would be a great day for us,” said Cipriano. “If we can consistently run in the top-12 to top-15 and end up with a top-10 finish, that would be great and anything more than that would be a bonus. Having as many laps at Stafford as I do will definitely play to my advantage when it comes to the learning curve. I’ve been lucky enough to race with some of the same guys who run the Tour regularly so having experience with those guys will help. I’ve been watching a lot of video to try to figure out when guys are pitting and what they’re doing on pit road and Earl [Pelletier] has been doing the same so we can come with an idea for a pit strategy. I think we can do well and we’re going to try to have fun for 200 laps.” 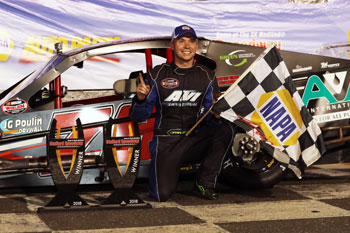 Cipriano will be a busy man during the NAPA Spring Sizzler® Weekend as he will also be back behind the wheel of his #78 J.G. Poulin Drywall / AVI International SK Modified® machine. Cipriano scored his first SK Modified® feature victory last season after having come agonizingly close to his first win with 4 second place finishes in his career. Now that Cipriano has his first win under his belt, he and his #78 crew are focused on becoming a more consistent front runner and challenging for the championship this season.

“We’re excited for the SK season,” said Cipriano. “We have a year under our belt together after taking a couple years off from SK racing and we had good speed and we won a race last year but we weren’t consistent enough. To win a championship you have to finish races. To get our first win was good and if we can put some races together and show speed consistently, I don’t see why we can’t be a contender for wins every week.” 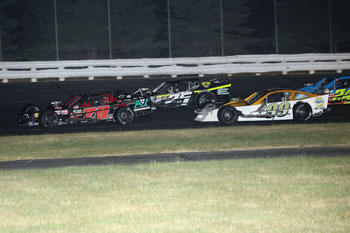 The NAPA Spring Sizzler® spans 3 days kicking off Friday April 26th with a full afternoon of practice for Stafford’s weekly divisions. The weekend continues Saturday with qualifying for all divisions including group qualifying for the NASCAR Whelen Modified Tour as well as feature racing for the Vintage All-Stars, Limited Late Models and Street Stocks. New for 2019 the Saturday Street Stock feature will be a 30 lap special event as part of the RMSPCO.com Street Stock Triple Crown. Sizzler® weekend is capped off Sunday with the NAPA Auto Parts Pit Party and feature racing for the SK Modifieds®, Late Models, SK Light Modifieds, and finally the NAPA Spring Sizzler® 200 for the NASCAR Whelen Modified Tour.