Jon McKennedy Geared Up For NAPA Spring Sizzler® at Stafford 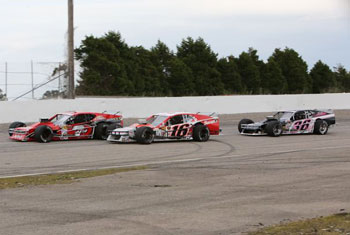 (Stafford Springs, CT)—After a strong run at Thompson and a win at Myrtle Beach in the 2018 Whelen Modified Tour season opener, Jon McKennedy is anxious to get back to victory lane at Stafford Speedway for the April 28-29 NAPA Auto Parts Spring Sizzler®. If recent history is anything to go by, then McKennedy is sure to be all smiles when he arrives with the Tommy Baldwin, Jr. owned #7 Accell Construction team. McKennedy has 4 career wins at Stafford with 3 of those wins coming in the last 2 years. McKennedy won the VMRS 80 in Sept. 2016 and he won both Modified Touring Series events last season at Stafford.

“Stafford is a track that I’ve really started to like over the last several years with winning a few races and I’m definitely looking forward to the Spring Sizzler®,” said McKennedy. “I started to figure the track out several years ago with the help of a few people and I think we can come to Stafford and have a real good chance to win a race this season. Our confidence is high at the moment. Having a good shot with a good car and good people around me will definitely make my job easier.” 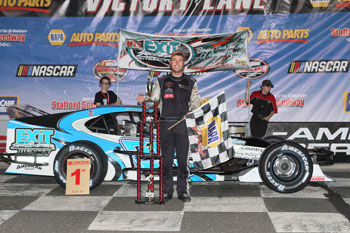 When the McKennedy-Baldwin pairing was announced, there were many prognosticators who foresaw the new combination doing great things and thus far they have lived up to the billing. McKennedy won his first race at New Smyrna in February and he followed that up with a weekend sweep by winning at Myrtle Beach and then the very next day winning at Caraway Speedway.

“Tommy [Baldwin] has great equipment and I knew if I ran the Tour with the right people and equipment around me that I could win races and maybe even the championship,” said McKennedy. “Those were two things that I was lacking the last couple of years and with Tommy I have all the pieces there and it shows in our results. We won our first race down in Florida at New Smyrna and we won Myrtle Beach and then at Caraway the next day, so it’s been a good start to the season with 3 wins in 5 races. We’re still talking about doing the full season. We have some things to still work out on that end, but we’ll definitely be at the Sizzler®.”

The Spring Sizzler® can often times throw a monkey wrench into the best laid race strategy plans, with its unique 200-lap distance for the Whelen Modified Tour. New pit stop rules allowing only 1 tire per pit stop for the Spring Sizzler® could shake things up even further with a variety of strategy options. But McKennedy is confident having a Daytona 500 winning crew chief in Baldwin on top of the box making the calls for the #7 team.

“I’m going to leave all the strategy stuff to Tommy,” said McKennedy. “I’m sure there will be a lot of different strategies in play. Certainly with the one tire change per stop and the 200-lap distance it can change things around. A lot of times you can go into a race with a plan and a strategy all lined up and then things don’t go to plan. You kind of have to go with the race and make calls based on how the car is going and what your track position is. Having Tommy on the box is huge for me. Most of my career I’ve always kind of been my own crew chief with the setup and tires. I’ve had a lot of success doing things that way but I’ve also been overwhelmed at times with all the different things going through my mind. It’s a bonus for me to have Tommy calling the shots and the adjustments and I can concentrate 100% on just driving the car. That has worked out for us in our first few races together and hopefully we can continue to ride this wave for as long as we can.”

If McKennedy can continue his winning ways in the NAPA Spring Sizzler®, it would be a significant win in the career of the Chelmsford, MA native.

“A NAPA Spring Sizzler® win would be huge,” said McKennedy. “Anyone from the New England area knows the Spring Sizzler® at Stafford is a big race. It would be awesome to win that race and I think we’ll have a good shot at winning. We just have to put ourselves in position and then be able to capitalize at the end of the race.”