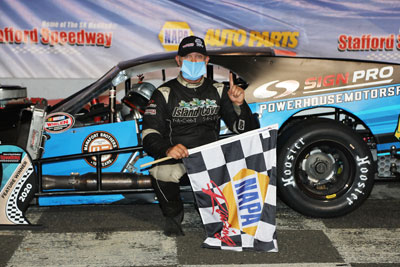 In the 40-lap SK Modified® feature, Teddy Hodgdon took the early lead at the drop of the green flag with Matt Vassar holding off Andrew Molleur for second.  Cory DiMatteo made a move to get by Molleur for third on lap-3 and as the field came to the line contact was made that sent Molleur around and collected the cars of Michael Christopher, Jr., Troy Talman, David Arute, Bryan Narducci, Todd Owen, Keith Rocco, and several other cars to bring the caution out with 3 laps complete.

Hodgdon took the lead back under green with DiMatteo moving in to second.  Marcello Rufrano was up to third with Matt Vassar in fourth and Mikey Flynn fifth.  DiMatteo made a move to the inside of Hodgdon on lap-8 and he took the lead at the line.  The top-3 of DiMatteo, Hodgdon, and Rufrano were beginning to pull away slightly from Flynn in fourth and Rocco in fifth as Vassar had slipped back to sixth in line on lap-12.

Rocco took fourth from Flynn on lap-14 while Owen was slowly working his way through traffic back towards the front of the field after being involved in the multi-car melee on lap-3 as he was eighth in line.  At the halfway point, DiMatteo and Hodgdon had pulled away from Rufrano in third, who had a gap back to Rocco in fourth and Ronnie Williams in fifth.  Flynn was sixth followed by Vassar, Owen, Michael Gervais, Jr., and Matt Gallo.

With 10 laps to go, DiMatteo was still in the lead with Hodgdon right behind him in second.  Rocco got around Rufrano to take over third with Williams in fifth.  Flynn was sixth followed by Owen, Vassar, Gervais, and Gallo.

Hodgdon was able to get to DiMatteo’s bumper but he couldn’t find a way to get by as DiMatteo scored his first career SK Modified® victory.  Rocco finished third with Williams and Rufrano rounding out the top-5. 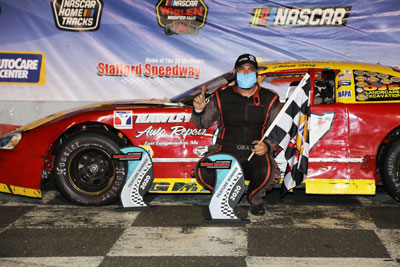 In the 30-lap Late Model feature, Marc Curtis led the field to the green but it was Duane Provost taking the lead on lap-1.  Curtis was second with Tom Fearn in third, John Blake in fourth and Rick Lanagan in fifth.  Fearn took second from Curtis on lap-2 and he was on the inside of Provost looking for the lead when the caution flew for Ryan Fearn, who came to a stop against the frontstretch wall.

Fearn streaked into the lead on the restart but R.J. Surdell spun in turn 1 to bring the caution out and put Provost back in the lead for the next restart.  Fearn ran side by side with Provost for a lap and a half after the restart before he took the lead on lap-4.  Curtis was now side by side with Provost for second with Adam Gray up to fourth and Jordan Hadley was up to fifth.  Provost took second on lap-5 and Gray got by Curtis on lap-6 to move into third.  Wayne Coury, Jr. was up to fifth as Hadley slid back to sixth in line and he went by Curtis on lap-8 to move into fourth.

Michael Bennett took fifth place from Curtis on lap-10 with Fearn still leading Provost and Gray but the caution came back out with 10 laps complete for Lanagan, who spun in turn 2.

Fearn took the lead back under green with Gray moving into second.  Coury took third with Provost sliding back to fourth and Bennett was fifth.  Gray made a move to the inside of Fearn on lap-12 and he took the lead on lap-13.  Coury followed him by Fearn as did Bennett to move up to second and third and drop Fearn back to fourth in line with Hadley fifth.

With 10 laps to go Gray was still out front with Coury, Bennett, Fearn, Hadley, Paul Arute, Al Saunders, Jim Mavlouganes, John Blake, and Michael Wray all giving chase.  Gray led the field to the checkered flag to pick up his first win of the 2020 season.  Coury finished second with Bennett, Fearn, and Saunders rounding out the top-5. 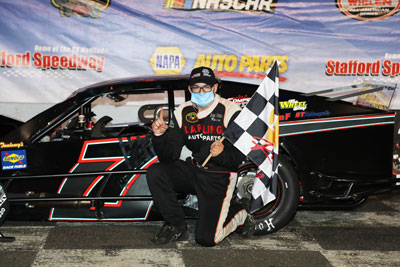 In the 20-lap SK Light feature, Todd Douillard charged into the lead on the start around the outside of Norm Sears.  Kyle Ellwood took second with Sears third and Andrew Les was nearly 4-wide charging his way into fourth.  Derek Debbis quickly worked his way around Les and Sears to move into third on lap-2 with Brian Sullivan following him through the field as he took fourth and dropped Sears back to fifth.  Bert Ouellette, Ethan Durocher, and Alina Bryden all spun in turn 4 to bring the caution flag out with 4 laps complete.

Ellwood took the lead on the restart with Debbis and Sullivan side by side for second.  Alexander Pearl was up to fourth and George Bessette, Jr. was up to fifth.  Two laps after the restart and the top-4 cars were lined up side by side in a high speed pace lap.  Debbis came out with the lead on lap-8 with Ellwood in second.  Pearl and Sullivan were still side by side for third with Pearl getting clear on lap-9 just before the caution came out for spins on the frontstretch by Cassandra Cole, Amanda West, and Joey Ferrigno.

Debbis took the lead back under green with Ellwood hanging to his outside for a lap before Pearl pulled to his inside and made a side by side battle for second on lap-10.  Sullivan was fourth in line with Les right behind him in fifth.  Pearl got clear of Ellwood on lap-13 with Debbis still in command of the race.

Debbis looked like he was well on his way to his 2nd consecutive victory but Ferrigno spun on the backstretch with 19 laps complete to bring the caution back out and set up a green white checkered finish.

Debbis bobbled on the restart and fell back to third in line but there was a pileup in turn 1 involving Bessette, West, Robert Bloxsom, III, Douillard, and Bob Charland that brought the caution out and put Debbis back on the point for another green white checkered attempt.

Pearl took the lead from Debbis on the restart with Debbis and Sullivan side by side for second.  Pearl led the field to the checkered flag to pick up his first win of the 2020 season.  Debbis edged out Sullivan at the line for second with Tyler Chapman coming home in fourth and Ellwood was fifth. 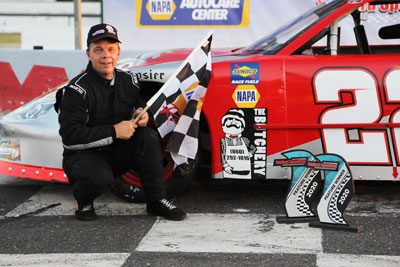 In the 20-lap Limited Late Model feature, Gary Patnode shot into the lead at the green flag with Devon Jencik slotting into second place.  Jeremy Lavoie was third with Andrew Durand and Alexandra Fearn lined up behind him.  Lavoie moved by Jencik to take over second on lap-2 and that move opened the door for Durand to follow him through to third on lap-3 and drop Jencik back to fourth.  Fearn followed the lead of Lavoie and Durand and she took fourth from Jencik on lap-4 and Matt Clement took over fifth as Jencik slid back to sixth in line as Patnode continued to lead the race.

Lavoie was applying heavy pressure to Patnode for the lead with Durand right on Lavoie’s back bumper as the cars approached the halfway point of the race but Patnode was able to keep his car out front.  Durand spun in the middle of turns 3+4 to bring the caution out with 9 laps complete.

Patnode took the lead back under green with Fearn moving into second.  Lavoie fell back to third with Matt Clement fourth.  Fearn made a move to the inside of Patnode for the lead coming out of turn 2 with 10 laps complete but she spun and brought the caution flag back out.

Patnode again took the lead on the restart with Clement going by Lavoie to move into second.  Durand followed Clement by Lavoie to take third and drop Lavoie back to fourth.  Durand continued his charge to the front as he took second from Clement on lap-12 just before the caution came out for Jay Clement, who came to a stop on the backstretch.

Patnode took the lead on the restart with Durand inches behind his back bumper in second.  Clement was third in line with Lucas Leone up to fourth and Lavoie fifth.  Durand drifted up the track in turn 2 on lap-17 but Clement was not able to take advantage and stayed third in line behind Durand with Patnode still out front.

Patnode held Durand off to the checkered flag to pick up his first win of the 2020 season.  Clement finished third with Lavoie and Leone rounding out the top-5. 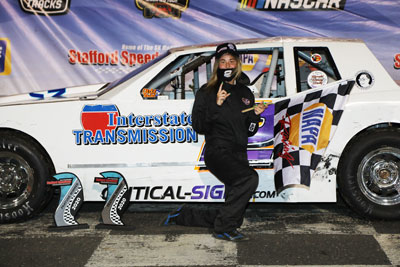 In the 20-lap Street Stock feature, Adrien Paradis took the lead at the green with Nickolas Hovey, Brandon Michael, Larry Barnett, and Al Stone, III making up the top-5.  Hovey spun coming out of turn 2 to bring the caution out and Paradis was sent to the rear of the field for contact with Hovey.  This put Michael and Barnett on the front row with Stone and Jason Lafayette in the second row for the restart.

Barnett took the lead on the restart with Stone taking second.  Lafayette drifted up the track in turn 4 and fell back to 12th in line as Michael was third, Meghan Fuller fourth and Chris Meyer fifth.  Robinson was sixth followed by George Yuska, Tess Beyer, Travis Hydar, Paradis, and Hovey.  Beyer and Yuska touched with Yuska spinning through the frontstretch infield to bring the caution back out with 10 laps complete.

Barnett took the lead on the restart with Fuller charging her way into second.  Meyer was up to third with Robinson and Stone side by side for fourth.  Fuller was able to make a move to the inside of Barnett to take over the lead on lap-13.  Robinson was now up to fourth behind Barnett and Meyer with Hydar in fifth as Stone slid back to sixth place.  Marvin Minkler spun in turn 3 to bring the caution out with 19 laps complete and set up a green white checkered finish.

Bobby Stirk, III and Yuska spun in turn 1 on the restart to bring the caution right back out.  Fuller and Barnett ran side by side for a lap before Fuller got clear to the lead coming to the white flag.  Meyer moved into second be couldn’t get close enough to Fuller as Fuller took down her first win of the 2020 season.  Behind Fuller and Meyer there was a multicar incident coming to the checkered flag but it was Stone finishing third, Lafayette fourth, and fifth.