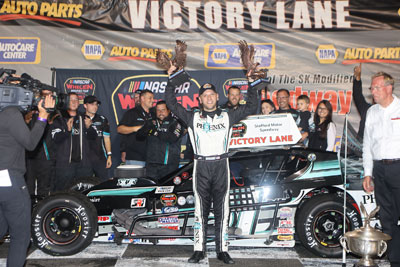 (Stafford Springs, CT)—Stafford Motor Speedway welcomed the NASCAR Whelen Modified Tour to Stafford Speedway for its third and final visit of the 2021 season on Friday, September 25 for the NAPA Auto Parts 150.

Anthony Nocella took the early race lead from pole position while Justin Bonsignore slid from second at the start back to fifth place as Jon McKennedy took second, Doug Coby third, and Craig Lutz fourth.  With 20 laps complete, the top-3 remained the same while Bonsignore worked his way around Lutz to take over fourth place and drop Lutz back to fifth.

Eric Goodale got by McKennedy to take over fifth place on lap-64, several laps after Pitkat had taken fourth from McKennedy as Nocella was still in the lead, but he now had Coby and Bonsignore right behind him in a 3-car train for the lead.

Bonsignore worked his way to the inside of Coby for second lnlap-69 but a lapped car prevented him from completing the pass.  Bonsignore again got to the inside of Coby on lap-70 and this time he was able to complete the pass for second.  Pitkat and Goodale were both closing in on the lead trio to make it a 5-way fight for the race lead.  Bonsignore was now applying heavy pressure to Nocella on lap-74 and he was able to make a pass to take the lead from Nocella on lap-78.  Pitkat took third from Coby on lap-79 with Goodale still in fifth.

With 90 laps complete the running order was Bonsignore followed by Pitkat, Coby, Lutz, and Goodale.  Rounding out the top-10 was Nocella, Ronnie Silk, Matt Swanson, Joey Cipriano, and Ronnie Williams.

The first caution flew on lap-130 for debris on the track with Bonsignore still in the lead with Pitkat, Coby, Lutz, and Goodale making up the top-5.  Bonsignore led the field on to pit road on lap-132 and he won the race off of pit road followed by Swanson, Coby, Goodale, Pitkat, Lutz, Patrick Emerling, Williams, Kyle Bonsignore, and Tyler Rypkema.

The race went back to green on lap-137 with Bonsignore taking the lead followed by Coby and Swanson.  Nocella was back up to fourth and Emerling was fifth.  Nocella went by Swanson on lap-138 to take third and Emerling followed him through to take fourth and drop Swanson back to fifth.  Swanson spun in turn 2 with several other cars collected on lap-146 to bring the caution back out and set up a green white checkered finish.

The lap-151 restart saw Coby briefly edge in front for the lead but Bonsignore was back in the lead to take the white flag.  Bonsignore led Coby to the checkered flag to end an 0 for 40 streak at Stafford and clinch the 2021 Whelen Modified Tour championship in grand style.  Emerling finished third with Kyle Bonsignore and Lutz rounding out the top-5.