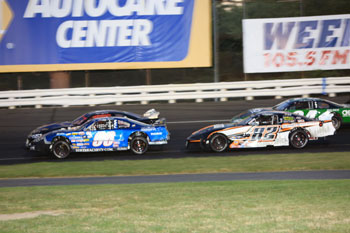 (Stafford Springs, CT)—After sitting out the 2017 season at Stafford Speedway, Palmer, MA native Justin Bren will return to the Limited Late Model ranks for the 2018 season with his eyes set on contending for the track championship. With a new #66 Bertera Chevrolet machine at his disposal, Bren is excited for the season and he can’t wait to get back to driving after a season of helping out his fellow Rob Russell Chassis teammates.

“I sat out last year and helped a few guys who use Rob Russell Chassis and it was tough for me to not want to throw my firesuit on and get back in the car,” said Bren. “I’m really looking forward to going fast again like Ricky Bobby in Talladega Nights. My old car was an original Limited Late Model car and not that there was anything wrong with that but it was built for a guy who was 160 pounds and 5’5”. I’m 6’2” and a lot heavier than that so it’s kind of nice to be working with a car that was built for me and I’m more comfortable in the driver’s seat then I ever have been. Driver comfort is huge when it comes to going fast in these cars so I think that will play into my hands and I’ll be able to go faster. I think the big difference will be the new car. Basically the only things I have from my old car is the motor, the transmission, and the seat. There’s been a lot of rule changes since the Limited Late Model division began so having the right chassis for the job will be key.”

As Bren prepares to take on his 6th season of Limited Late Model competition, he is not feeling worried about when he hits the track for the first time in 2018.

“I don’t think there will be any rust to knock off, it’ll be like riding a bike,” said Bren. “Come the open practice, maybe I’ll take it easy for the first couple rounds of practice but after that if there was any rust, it should be gone. I’m not trying to toot my own horn here, but I feel pretty confident heading into this season. You have to believe in yourself and your car. If you don’t believe then it’s not going to happen for you. I have to thank my sponsors Bertera Chevrolet in Palmer, MA and LifeCare Family Chiropractic in Ellington. I couldn’t do this without their help and I’m very thankful for the opportunity I have going into the 2018 season. I also have to give a big thank you to Rob Russell for all his help with getting the new car together.” 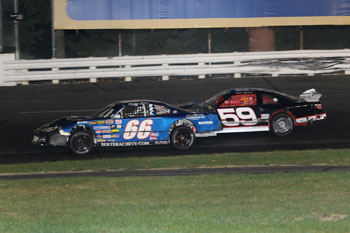 “My goal is to try to win every week,” said Bren. “Obviously that’s not realistic but I want to be there at the end of races and get on the podium. As the season winds down I’d like to be in contention for the championship. The big goal will be to win races and be on the podium and the championship will be the bigger goal. I think 2015 was a good year for me with consistency and 2016 was a better year with wins but we had a lot of bad luck and mechanical failures. My hope is we can put together a mix of our consistency from 2015 with our success and wins from 2016 and make a good run at the championship.”

Bren recently changed occupations and now that he is teaching Computer Aided Drafting at Pathfinder Regional Vocational Technical High School in Palmer, he will have plenty of time during the summer to try to eliminate any mechanical issues.

“Now that I’m teaching, I’ll have summers off so I’ll have plenty of time during the week to be working on the car to make sure we don’t have any mechanical issues on Friday nights.”

The competition in the Limited Late Model division will be wide open in 2018. Bryan Narducci and Al & Cliff Saunders combined to win 9 races last season but they are moving up to the SK Light and Late Model divisions respectively for the 2018 season. Despite the graduation of those three drivers to higher competition, Bren knows it will be no easy task to reach NAPA Victory Lane this year.

“I definitely think with some of the guys who have moved on, the veteran drivers like Duane Provost and Jeremy Lavoie are going to be tough this year. Also R.J. Surdell, you can’t count him out, Ryan and Alexandra Fearn are going to be strong, and then there are some new drivers. From what I’ve seen, the newer drivers tend to have a tough time in their first season so hopefully us veteran drivers can set the bar.”

With a new chassis at his disposal, Bren has plans to follow Al & Cliff Saunders into the Late Model ranks at the end of the 2018 season.

“My plan is to move up to Late Model at the end of the season so hopefully 2018 will be a good year to make the transition,” said Bren. “I’ve got the new car and after the year we’ll get a Late Model motor if everything goes as planned.”

Bren will kick off his quest for wins at the 47th Annual NAPA Auto Parts Spring Sizzler® on April 27-29. Tickets for the “Greatest Race in the History of Spring” are on sale now at the Speedway Box Office. Tickets are priced at $40.00 for adult general admission tickets, $5.00 for children ages 6-14, and children ages 5 and under are admitted free of charge when accompanied by an adult. Reserved seating is priced at $42.00 for all ages. As always, Stafford Motor Speedway offers free parking with overnight parking available. All tickets are good for both Saturday and Sunday admission. All ticket prices include 10% CT Admission Tax. Discount Spring Sizzler® tickets will be available beginning in March at participating NAPA Auto Parts stores.