(Stafford Springs, CT)—Stafford Speedway returned to NASCAR Whelen All-American Series racing action on Friday, May 18th with the Valenti Modified Racing Series in the house for the 5th Annual VMRS 80. Keith Rocco set a Stafford SK Modified® division record with his 6th consecutive win dating back to the final 2 races of the 2017 season. Also taking wins were Tom Fearn in the Late Model division, Andrew Molleur in the SK Light feature, Jeremy Lavoie in the Limited Late Model feature, and Johnny Walker in the Street Stock feature. 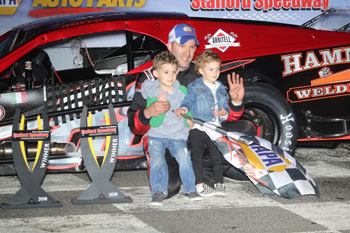 In the 40-lap SK Modified® feature event, Chase Dowling led the first lap of the race but Joey Cipriano took the lead on lap-2 but the caution came out for spins on the backstretch by several cars, putting Dowling back up front for the restart.

Keith Rocco was on the charge since the green flag and he moved into fifth on lap-10 and then took fourth from Bolles on lap-11. Todd Owen tried to follow Rocco by Bolles, but Bolles was able to hold him off. Owen made a pass on Bolles stick on lap-14 and he moved up to fifth as Cipriano continued to lead. Bolles and Zach Leone came together in turns 1+2 to bring the caution out with 14 laps complete.

Gervais briefly took the lead from Cipriano but Cipriano came back strong and got clear into the lead on lap-17. Ronnie Williams and Rocco were now side by side for third before the caution came out for Cory DiMatteo, who came to a stop sideways in the middle of turns 1+2.

Gervais took the lead on the restart with Cipriano and Rocco side by side for second. Cipriano got clear to second on lap-19 and he took the lead from Gervais on lap-20. Rocco was side by side Owen for third but he moved into second behind Cipriano and Gervais was back to third. Owen was in fourth with Williams right behind him in fifth. The top-5 got into single file on lap-24 with Rocco taking the lead from Cipriano while Gervais was leading Williams and Berndt in the chase for third.

Williams got by Gervais for third on lap-26 and Berndt pulled alongside Gervais in a fight for fourth as Cipriano was still glued to the back bumper of Rocco for the lead. Gervais and Berndt ran side by side until lap-30 when Berndt got clear into fourth behind Williams. Cipriano took a look to the inside of Rocco in turn 4 on lap-31 but fell back into line in second.

With 5 laps to go, Rocco, Cipriano, and Berndt were running nose to tail in a 3-car train for the lead with Williams, Gervais, and Rowan Pennink in a 3-car train for fourth behind the lead trio. Rocco took the checkered flag to pick up his fourth win in four starts this season and his sixth consecutive SK Modified® win dating back to the end of the 2017 season, setting a Stafford Speedway SK Modified® record for consecutive wins. Cipriano finished second with Berndt, Williams, and Gervais making up the top-5. 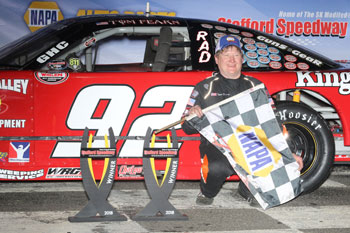 In the 30-lap Late Model feature event, Al Saunders took the early lead while Paul Arute and Tom Fearn quickly worked their way into second and third. Fearn took second from Arute on lap-6 while Tyler Leary made a move to take fourth from Chase Cook. Leary’s pass opened the door for Darrell Keane and Michael Wray to also get by Cook to drop him from fourth back to seventh.

Keane got by Leary on lap-10 to move into fourth as Al Saunders continued to lead with Fearn closing in from behind. Arute was third with Keane, Wray, and Leary making up the top-6. Fearn took the lead from Saunders on lap-13 with Arute starting to close in on the two leading cars.

Fearn led Saunders to the checkered flag to pick up his first win of the 2018 season. Arute finished third with Keane and Wray rounding out the top-5. 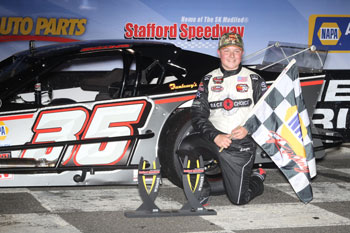 In the 20-lap SK Light feature event, Mark Bakaj took the early lead on the outside of Todd Douillard with Glenn Griswold, Mikey Flynn, and Brett Gonyaw lined up behind them. Gonyaw took to the outside lane to get around Flynn for fourth place on lap-3 and the caution came out with 3 laps complete for debris in turn 3.

Bakaj took the lead back under green with Douillard and Griswold behind him but the caution came back out with 5 laps complete for a multi-car spin at the exit of turn 4.

Bakaj again took the lead with Douillard in hot pursuit. Flynn and Andrew Molleur were side by side for third when the caution came back out with 7 laps complete for Bryan Narducci, who came to a stop in the middle of turns 3+4 infield grass.

Bakaj and Douillard ran side by side for a lap on the restart before Bakaj got clear into the lead on lap-9. Douillard then slid back to fifth as Molleur took second, Marcello Rufrano third, and Flynn fourth. Molleur was looking to the inside of Bakaj for the lead on lap-12 and he was able to take the lead with an assist from Rufrano down the backstretch going into turn 3. Douillard spun in turns 3+4 to bring the caution back out with 12 laps complete and put Bakaj back up front for the restart with Molleur to his outside.

Molleur streaked into the lead on the outside of Bakaj with Gonyaw taking third. Griswold and Alexander Pearl were side by side for fourth behind the lead trio. Pearl got clear into fourth on lap-15 with Griswold now side by side with Bob Charland for fifth.

Molleur held Bakaj off to the checkered flag to pick up his first career SK Light win at Stafford. Gonyaw finished third with Narducci recovering to fourth and Pearl finished fifth. 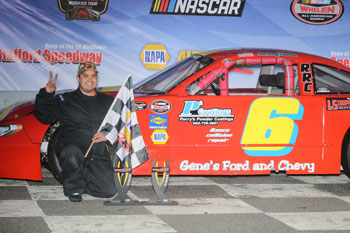 In the 20-lap Limited Late Model feature event, Steven Midford took the early lead with Gary Patnode right on his bumper in second. R.J. Surdell was third with Jeremy Lavoie fourth and Justin Bren fifth. Lap 3 saw a shuffle as Midford began to slide backwards with Lavoie moving to the lead, Bren to second, and Surdell to third. Patnode fell from second back to fourth with Ryan Fearn in fifth while Midford has slid all the way back to seventh. Andy Marchese spun in turn 2 to bring the caution out with 5 laps complete.

Lavoie took the lead back under green with Bren in second. Fearn took third from Surdell with Alexandra Fearn in fifth. Alexandra Fearn went by Surdell to move into fourth on lap-8 as Bren was pressuring Lavoie for the lead. Alexandra and Ryan Fearn touched wheels in turn 4 on lap-15 with Alexandra nearly spinning out but she was able to keep her car going forward and the race stayed green. Bren was still giving chase to Lavoie for the lead with Ryan Fearn now locked in a battle with Surdell for third.

Bren made one final charge but he came up just short as Lavoie took down his second win of the 2018 season. Ryan Fearn held off Surdell for third with Duane Provost rounding out the top-5. 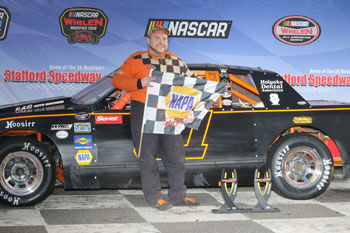 In the 20-lap Street Stock feature event, Chuck Harrison led the first lap before Jason Lafayette moved into the race lead on lap-2. Chris Bagnall was third with Richard Ciriello fourth and Vince Gambacorta fifth. Brandon Michael’s car dropped off the pace as smoke began to pour out from underneath and he pulled off the track and behind the wall while the race stayed green. The caution came out with 4 laps complete for a spin in turn 2 by Harrison that collected the cars of Ciriello and Nicole Chambrello.

Lafayette took the lead back under green with Bagnall in second. Travis Hydar was up to third with Gambacorta and George Bessette, Jr. side by side for fourth. Gambacorta got clear on lap-7 and he brought Johnny Walker with him into fifth as Bessette slid back to sixth in line. Gambacorta drifted up the track on lap-9, which allowed Walker to move into fourth and Bessette to fifth . Gambacorta then brought his car to pit road on lap-10 with damage to his left front fender as Lafayette continued to lead Bagnall.

Walker took third from Hydar and he was applying heavy pressure to Bagnall for second on lap-11. Walker made his move for second on lap-13 while Hydar and Bessette both got by Bagnall to drop him from second all the way back to fifth. Hydar spun in turn 2 to bring the caution out with 15 laps complete and Bessette was sent to the rear of the field for contact with Hydar.

Walker took the lead from Lafayette in the outside lane on the restart with Bagnall third. Meghan Fuller was up to fourth with Chambrello back up to fifth after her earlier misfortune. Walker led Lafayette to the checkered flag to pick up his second win of the 2018 season. Chambrello finished third with Bagnall and Bessette rounding out the top-5.