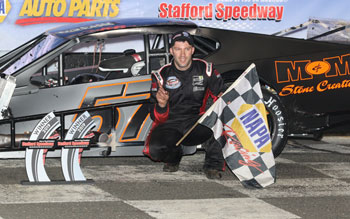 (Stafford Springs, CT)—Stafford Speedway hosted the Open Modified 80 with tour style modifieds taking center stage for an 80-lap race around the Connecticut half-mile. Keith Rocco took the lead just before halfway in the 80-lap race and he dominated the second half of the race to win the race and lead a podium that consisted of Stafford SK Modified® regulars with Todd Owen finishing second and Matt Galko third.

Todd Owen streaked into the lead from pole position at the green flag with Keith Rocco right on his bumper. Ronnie Williams was third with Dave Etheridge fourth and Max Zachem in fifth. Eric Goodale was in sixth with Chase Dowling, Jeff Gallup, Matt Galko, and Cam McDermott making up the top-10.

Williams began to slide backwards as Etheridge, Zachem, Goodale, Dowling, and Galko all got by him to drop him from third back to 8th in line as Owen and Rocco continued to lead the field. The caution came out with 20 laps complete for Marcello Rufrano, who appeared to lose an engine at the entrance to turn 1. 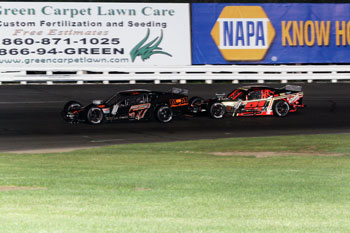 Owen took the lead back under green with Rocco right behind him in second. Etheridge was third in line with Galko coming up to fourth and Goodale up to fifth. Williams was back up to sixth with McDermott, Mark Bakaj, Zachem, and Sal Accardi, Jr. making up the top-10. Rocco made a move to the inside of Owen in turn 3 on lap-26 to move into the lead. Accardi spun in turn 2 to bring the caution out with 36 laps complete.

Under the caution all the leaders came to pit road for fresh tires with teams allowed to change 2 tires. Goodale won the race off pit road and he restarted second as Andrew Molleur stayed out on track. Rocco was third in line for the restart with Owen alongside him in fourth.

Molleur took the lead on the restart with Rocco taking second from Goodale. Owen was fourth in line with Etheridge fifth. Rocco took the lead from Molleur on lap-38 and Molleur began to slide backwards as Goodale took second, Owen third, Dowling fourth, and Galko fifth. Etheridge was sixth with McDermott and Dave Schneider in seventh and eighth with Molleur finally slotting into line in ninth place.

Rocco and Owen began to slowly pull away from Goodale in third, who in turn had Dowling, Galko, Etheridge, and McDermott lined up behind him. This was the order with 10 laps to go.

Rocco led Owen to the checkered flag to win the Open Mod 80. Galko finished third with Goodale and Dowling rounding out the top-5.