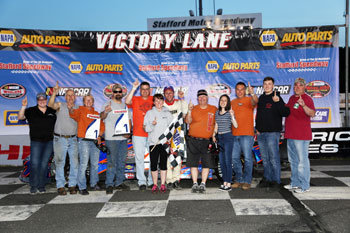 (Stafford Springs, CT)—As the 2017 NASCAR Whelen All-American Series season at Stafford Motor Speedway heads into its second half at full speed, Ellington native and Late Model driver Kevin Gambacorta is in search of making Stafford Motor Speedway history. Gambacorta and the #23 Rafferty Fine Grading team are only 2 points behind Glen Reen in the chase for the 2017 Late Model championship and as a previous track champion in both the DARE Stock and Limited Late Model divisions, a championship this season would make Gambacorta the first driver in Stafford history to win a track championship in three different divisions. Gambacorta is currently one of 10 different drivers, including Mike Stefanik, Tom Rosati, Jerry Marquis, Tom Fearn, Chuck Docherty, Doug Coby, Woody Pitkat, Tony Membrino, Jr., and Michael Bennett, who have won championships in 2 different divisions. 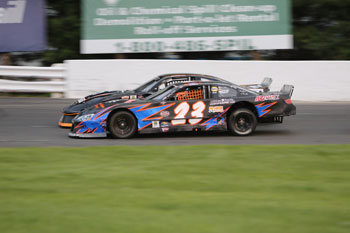 “When you look back at the history of Stafford Speedway and the names of some of the drivers who have won races and championships in the past, I don’t really think my name deserves to be mentioned along with them,” said Gambacorta. “I like to stay humble but if we could win a Late Model championship this season and be the first to win championships in 3 different divisions, that would be something that I would really be proud of.”

Being in the thick of a championship race is nothing new for Gambacorta as he has a DARE Stock championship and two Limited Late Model championships to his name at Stafford. The way the 2017 season has played out thus far has Gambacorta thinking back to his last championship season of 2011.

“It’s weird, this season kind of feels to me like the 2011 season when we won the Limited Late Model championship,” said Gambacorta. “We’ve been relaxed the whole season and we just have a feeling that things are going to be good at the track unlike the last couple of years when we’ve been stressed out. I look at the points a little and it seems like it’s going to be between myself, Reen, Fearn, Michael Wray, and Michael Bennett right now but I’m not worried about the standings and keeping track of every point. This season is the most fun I’ve had in the Late Model division yet.” 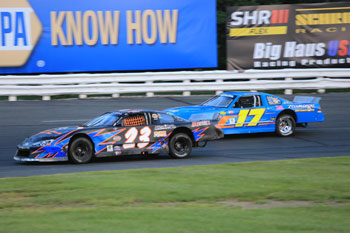 Gambacorta captured his lone feature victory of the 2017 season to date back in May when the Late Model division kicked off the season with a stretch of 7 different winners in the first 7 feature events. Along with his feature victory, Gambacorta has been a model of consistency with top-8 finishes in each of the first 10 races. Gambacorta is currently tied for the division lead with 8 top-5 and 10 top-10 finishes and he credits his off-season work on his #23 car as the key to his success.

“Over the winter we spent some money on some things that needed to be upgraded,” said Gambacorta. “We got a new engine, a new rear, basically a whole new driveline. Jay Stuart has also been a big help teaching me a few things. We usually talk at least once a week and I always have questions for him. I think the biggest thing will be keeping up on the car and keeping up with how the track changes with the weather. In years past we never made any changes to the car for the weather and this year we’ve been changing things according to the track conditions. We just have to be smart out on the track and see if one of those other guys has a bad night where we can pick up some points. 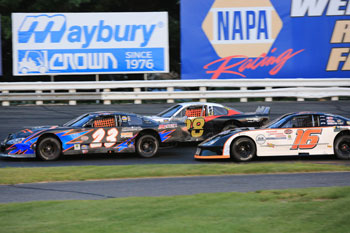 In addition to Rafferty Fine Grading and LifeCare Family Chiropractic, Gambacorta picked up some additional sponsorship in the paddock area recently.

“I really have to thank Rafferty Fine Grading and LifeCare Family Chiropractic for their support,” said Gambacorta. “Also I have to thank Gary LaVigne. He approached me last Friday night in the pits with a check and said he wanted to help us out, so a big thanks to him as well for his support.”

Gambacorta and the Late Model division are back in feature action this Friday night, August 11th with a 30-lap feature event. The Late Models will be joined by the SK Modifieds®, SK Lights, Ltd. Late Models, and DARE Stocks in feature action with tickets priced at $17.50 for adult general admission tickets, $5.00 for children ages 6-14, and children ages 5 and under are admitted free of charge when accompanied by an adult. Reserved seat tickets are $20.00 for all ages. All ticket prices include 10% CT Admission Tax. Stafford Motor Speedway offers plenty of free parking along with overnight parking available for self contained Recreational Vehicles.