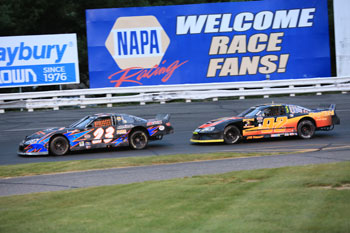 (Stafford Springs, CT)—Since his rookie season in 2012, Ellington native Kevin Gambacorta has become a mainstay in Stafford Speedway’s Late Model division in the yearly chase for the championship. Gambacorta finished 9th in the standings as a rookie in 2012 but he has finished either 3rd or 4th in each of the past 5 seasons in the standings. Gambacorta and the #23 Rafferty Fine Grading/LifeCare Family Chiropractic team finished the 2017 season tied for 2nd with Tom Fearn coming agonizingly close to making Stafford history as the first driver to win championships in three different divisions. With a new Dodge Charger body on his #23 car, Gambacorta is ready to once again challenge for a Late Model championship.

“We just put a new Dodge Charger body on the car,” said Gambacorta. “I used to run the Charger body back in the Limited Late Model days and we won a couple championships with it so maybe the new body will bring back some of our good luck. We were really good last year but there was one night halfway through the season where we got in an early wreck which knocked the toe out of the car and after that the car was terrible. We could never figure it out all season long. We tried so many different things and the car just wouldn’t turn. It would be good for a lap or two and then it wouldn’t turn after that. After the season was over we brought the car down to Jay Stuart and he’s gone through the entire car so hopefully we’ve gotten the chassis figured out.”

Looking at the numbers and Gambacorta’s 2017 season was indeed a tale of two halves. Gambacorta recorded 6 podium finishes, including his lone win, in the first 10 races while he was only able to record one podium finish over the final 7 races. With the championship margin being so small at only 8 points, Gambacorta feels like the championship might have been in their grasp and slipped away. 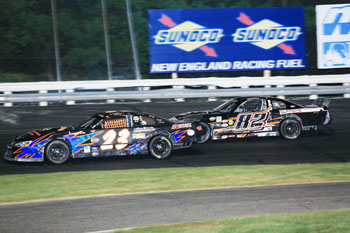 “We lost the championship by only 8 points and it really bothered me that we never did get the car figured out,” said Gambacorta. “I think there were plenty of nights during the second half of the year that we gave up more than 8 points. After the start to the year we had, it was a disappointing season. We knew it wasn’t a setup issue, it was a mechanical issue somewhere. I remember the announcers would always talk about how we came on strong at the end of races and we just couldn’t do that in the second half.”

The race for the championship won’t be an easy one. 7 of the 8 Late Model feature winners from 2017 are returning in 2018, but Gambacorta can take confidence in the fact that he has another year of experience to build on and he now has a backup car thanks to Andy Marchese.

“Seeing how terrible we were the second half of last season, we still finished only 8 points out of the championship,” said Gambacorta. “If we can run this year like we ran in the first half of last season we should be pretty good. I really think we had the most consistent car last year. We have another season of experience and our equipment is on par with some of the other top teams. I’m excited to be back. We’ve redone a lot of things on the car so we have good equipment and now with Andy Marchese moving to the Limited Late Model division, he said we could use his Late Model car as a backup if we ever need it. I think we’ve showed the last couple of years we can run with the front running guys like Michael Bennett, Tom Fearn, Glen Reen, and Michael Wray. When you can race against those guys and win races and compete with those guys, you feel like you belong and you know you have the ability to beat those guys. I feel like I’m a guy that those guys have to worry about beating.”

Gambacorta has Rafferty Fine Grading and LifeCare Family Chiropractic returning as sponsors for the 2018 season along with Lavigne Law with Gary Lavigne after a chance meeting in the pits last season. 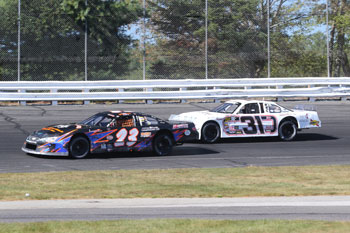 “Thanks to Rafferty Fine Grading and LifeCare Family Chiropractic for their support, and Gary Lavigne with Lavigne Law,” said Gambacorta. “At the start of last year Gary came by the car in the paddock area and asked us about our radio channel so he could listen to us during the races with his scanner. He came back towards the end of the year and told me he really enjoyed listening to us and he gave me a check to help finish out the year and all we had to do was put Lavigne Law on the car. Gary sent me another check during the winter to help us get started with the 2018 season, so a big thanks to him for his support and also I have to thank Dave Miller from Auto machine and Jay Stuart with JMD Chassis for their help.”

Gambacorta’s pursuit of the Late Model championship kicks off with the 47th Annual NAPA Auto Parts Spring Sizzler® on April 27-29. Tickets for the “Greatest Race in the History of Spring” are on sale now at the Speedway Box Office. Tickets are priced at $40.00 for adult general admission tickets, $5.00 for children ages 6-14, and children ages 5 and under are admitted free of charge when accompanied by an adult. Reserved seating is priced at $42.00 for all ages. As always, Stafford Motor Speedway offers free parking with overnight parking available. All tickets are good for both Saturday and Sunday admission. All ticket prices include 10% CT Admission Tax. Discount Spring Sizzler® tickets will be available beginning in March at participating NAPA Auto Parts stores.