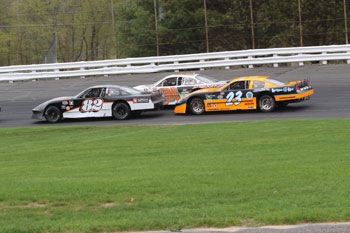 (Stafford Springs, CT)—After one month of NASCAR Whelen All-American Series competition at Stafford Speedway, Late Model driver Kevin Gambacorta has emerged as possibly the hottest driver at the Connecticut half-mile facility. Gambacorta’s 2019 season has been up and down with the Ellington native already experiencing the highest of highs and the lowest of lows.

Gambacorta kicked off the 2019 season by piloting his #23 Lavigne Law / LifeCare Family Chiropractic Dodge to a victory, only to have the win taken away when he was disqualified for an illegal shock on his #23 machine. Gambacorta hasn’t let the DQ keep him down and has rebounded with almost perfect results in the last three races with two second place finishes and a win. During his 3-race hot streak, Gambacorta has had to charge through the field each Friday night thanks to the DQ removing him from the handicapping system used to determine the starting lineups.

“It was pretty upsetting because we’ve never been disqualified for anything before,” said Gambacorta. “We just had to move past it and prove that the problem wasn’t the reason why we won that race. It wasn’t too tough to come back to the track. We really did our homework over the winter and we wanted to show everyone that and give people something else to talk about rather than the race we got DQ’d.” 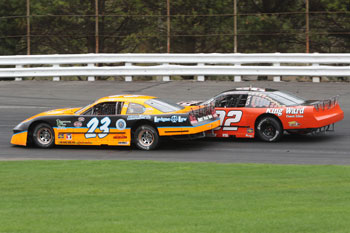 Through the first four races of the 2019 season, Gambacorta and the #23 team have been the dominant Late Model car. Gambacorta went from 16th to 2nd on May 11, 10th to 2nd on May 17, and last Friday won after starting from 13th. With the Late Model division changing tire compounds over the winter, Gambacorta feels right at home while other teams are still trying to find the sweet spot with their car setups to match the early season pace that Gambacorta has shown.

“Over the winter when they switched to the tires we’re running now I thought it might be to my advantage based on my car and my driving style,” said Gambacorta. “I feel like the last couple years the slick tires may have helped some drivers make up a lot if they didn’t have a good handling car. Other than Tom Fearn last year, I feel like we had the best car in the division. It has been a little surprising that we’ve been able to drive through the field each week. I was chatting with Jay Stuart the other day and we kind of lucked into how our car works with these new tires. Other times when we’ve switched tires we’ve had to start all over again with the car, but what we have going on right now is working very well.”

Gambacorta is no stranger to winning championships at Stafford as he has won 3 track championships (2004 DARE Stock, 2006 & 2011 Limited Late Model). With his early season disqualification leaving him with 0 points, Gambacorta has come to the track each week since not worrying or thinking about points, which has almost been a blessing in disguise. 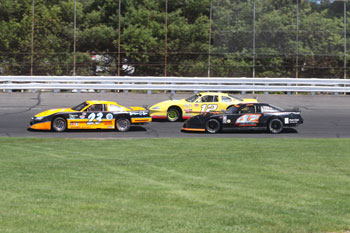 “This season is the most fun I’ve ever had driving,” said Gambacorta. “I work on the car every week and I start to doubt myself in the shop and then we go out for practice and the car is still good so I’ve got to work on getting that out of my head. I have to take advantage of this while I can because guys like Tommy Fearn are going to figure things out eventually. We gave everyone a head start this season and we’re slowly working our way out of the hole. I look at the standings after the races on a Friday night to see where we are but I’m not overthinking anything. When we were racing for championships in the DARE Stock and Limited Late Model divisions, I would worry about every two points here and there. I’ve never raced like this before, but I’m pretty comfortable not worrying about points.”

The key for Gambacorta and his #23 team will be to see if they can maintain their high level of performance throughout the entirety of the 2019 season. After his disqualification left him with 0 points and a 50 point gap to the leaders, Gambacorta has chopped that deficit down to 34 points over the last three races and if he can maintain his level of performance, he just might be making history at the end of the year. 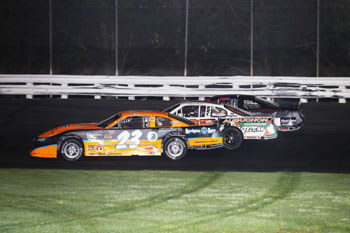 “I think that we can keep on going,” said Gambacorta. “We have a pretty good handle on the car setup and every week we check the car. We’re already where we need to be with the season changing so when it gets hot and slick during the summer, the car might be even a little better than it is right now. If we can put together a season like Tommy Fearn had last year, it could be pretty good at the end of the year. It’s been a long time since we won a championship and no one has ever won championships in 3 different divisions, so that’s something I would love to accomplish one day but if it doesn’t happen, I’m not going to get too disappointed about it. We’re going to keep on racing as hard as we can until they tell us that we’re mathematically out of contention. I have to give a big thanks to our sponsors Lavigne Law Firm and LifeCare Family Chiropractic, and we have two new sponsors that came on board with us this season with Cold Creek Tavern and Neil’s Fine Wine & Liquors.”

Gambacorta will look to add another podium finish to his 2019 results this Friday night, May 31, which is Military Appreciation Night with Fireworks. Tickets for this Friday night’s Military Appreciation Night program are $20.00 for adults, $5.00 for kids 6-14, and as always 5 & under free. Any active or reserved military members can get a general admission ticket at the gates with proper I.D. for only $10.00. Reserved seating is priced at $23.00 for all ages. All tickets include 10% CT Admission Tax. General admission gates open at 5:15pm, with qualifying races beginning at 6:15pm and feature races to follow.