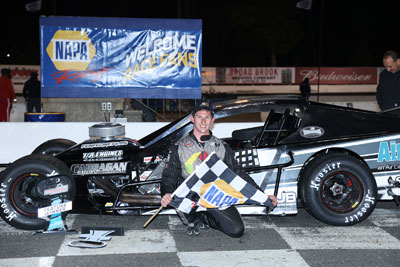 In the 40-lap SK Modified® event, Noah Korner and Stephen Kopcik led the field to the green flag and they ran side by side for the first two laps of the race before Kopcik took the lead at the start of lap-3.  Teddy Hodgdon was third in line followed by Marcello Rufrano and David Arute.  The caution flew with 3 laps complete for a spin coming out of turn 2 by Tom Bolles and Tyler Leary which collected the car of Darin Renihan.

Kopcik took the lead on the restart with Hodgdon coming up to second.  Rufrano followed him through as Korner fell back to fourth with Arute in fifth.  Todd Owen and Michael Christopher, Jr. were side by side for sixth place with Tyler Hines, Ronnie Williams, and Keith Rocco lined up behind them.  Rufrano went by Hodgdon on lap-7 to move into second and he pulled to the inside of Kopcik on lap-8 and took the lead at the line by a nose.  Rufrano cleared Kopcik on lap-9 and now Hodgdon and Kopcik were side by side for second with Korner and Arute right behind them.

With 15 laps complete, Rufrano continued to hold the lead over Kopcik, Hodgdon, Korner, and Arute.  Owen was sixth with Tyler Hines, Williams, Andrew Molleur, and Keith Rocco rounding out the top-10.  Arute began to slide backwards as by lap-21 he as back to 10th place as Owen was up to fourth with Williams in fifth as Rufrano, Kopcik, and Korner were still making up the top-3.  The caution came back out with 22 laps complete as Keith Rocco lost a tire and Arute took evasive action to avoid Rocco’s car.

On the restart, Molleur and Chase Dowling came together and got into the turn 2 wall to bring the caution right back out.  Williams was sent to the rear of the field by Stafford officials for making contact with Molleur.

Rufrano took the lead back under green after a lap of side by side dueling with Kopcik.  Kopcik came back to the inside of Kopcik on lap-25 but fell back to second with Owen to his outside in a fight for second.  The cautin came back out with 26 laps complete for Bryan Narducci and Troy Talman, who touched wheels and got into the turn 1 wall.

Kopcik took the lead on the restart with Owen taking second.  Rufrano was third in line followed by Hines, Korner, Hodgdon, Arute, the side by side duo of Matt Vassar and Michael Gervais, Christopher, and Mikey Flynn.  Owen was beginning to apply heavy pressure to Kopcik’s back bumper on lap-30, looking high and low but thus far unable to make a pass.  Hines took from Rufrano on lap-35 while up front Kopcik had pulled away from Owen by several car lengths.

Kopcik led the field to the checkered flag to pick up his first win of the 2021 season.  Owen finished second with Hines, Rufrano, and Korner rounding out the top-5. 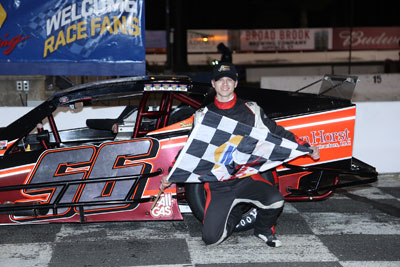 In the 20-lap SK Light feature event, Tyler Chapman spun coming out of turn 4 to take the green to bring the caution out and Nicole Chambrello got out of shape on the backstretch before rejoining at the rear of the field.

George Bessette, Jr. led the field to the green flag but Chris Matthews made a strong 3-wide move to take the lead on the very first lap.  Derek Debbis came up to third behind Bessette and he rode there until lap-4 when he took second from Bessette.  Brian Sullivan was fourth with Steven Chapman in fifth.

Debbis went by Matthews to move into the lead on lap-7 and his move opened the door for Bessette to follow Debbis by Matthews and take over second place.  Bessette took to the outside groove to pull alongside Debbis and he had the lead by a nose on lap-9.  Debbis got back in front of Bessette on lap-10 while Sullivan got around Matthews to move into third.  Alexander Pearl was on a charge towards the front as he took fifth place from Steven Chapman.  Peter Bennett was seventh followed by Anthony Bello, Zack Aszklar, and Bob Charland.

With 5 laps to go, Bessette was glued to Debbis’ back bumper with Sullivan alone by himself in third while Pearl and Steven Chapman were fighting hard for fourth place.  Bessette couldn’t find a way around Bessette as Debbis took down his first win of the 2021 season.  Sullivan finished third with Pearl and Bennett rounding out the top-5. 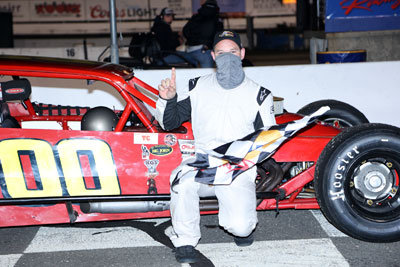 In the 15-lap Vintage All-Stars feature event, Ben Levangie took the lead at the drop of the green flag with Gary Byington, Skip Swaintek, Ed Flemke, Jr. and Jeff Hummel making up the top-5.  Flemke spun coming out of turn 2 on lap-6 but kept going and the race stayed green.

Levangie led from start to finish to take the checkered flag with Byington coming home in second.  Swaintek finished third with Flemke and Hummel rounding out the top-5.