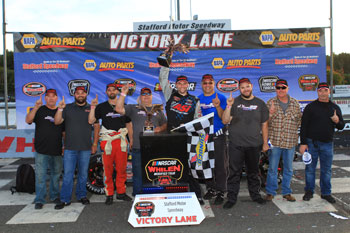 Kyle Bonsignore took the lead from Doug Coby with just four laps remaining in the NAPA Fall Final 150 at Stafford Motor Speedway and went on to capture his first checkered flag in Whelen Modified Tour competition.

Justin Bonsignore, who has seven wins in the first 15 races of the season, clinched his first championship with one race still remaining on the schedule. The Holtsville, New York, driver may have finished 12th, but he left Stafford with a 64-point lead in the championship point standings. The maximum amount of points a driver can earn in one event is 48.

“This is great,” Kyle Bonsignore said. “To come up here in their backyard, it’s so tough to run these races. Everything has to work out perfect, and today it did. We had a great car at the end, and that’s all that we needed.”

Kyle started 12th, but worked his way up through the field in the midst of a green flag run just past the halfway point. After pitting for tires during a late caution, Kyle had to climb back through the field and pass Coby, an 11-time Stafford winner, in the process. He rolled the bottom of Coby in turn three and completed the pass in just enough time. 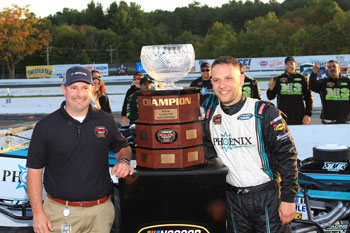 Justin Bonsignore, who started from the pole position, ran inside the top five for much of the race. However, in the midst of the green flag run where Kyle was charging through the field, the two cousins made contact and Justin went high in turn three, losing multiple positions.

Even though his quest for another checkered flag was over, he collected the No. 51 Phoenix Communications Chevrolet, holding it off the outside wall and crossing the line 12th.

“Lot of hard years, and a lot of hard work over those years,” Justin Bonsignore said. “It’s been an unbelievable season. We had a ton of speed right from the first practice at Myrtle Beach.”

The NASCAR Whelen Modified Tour returns to the track for the season-finale at Thompson Speedway Motorsports Park on Sunday, October 14.