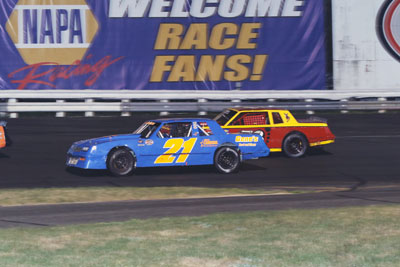 (Stafford Springs, CT)—Halfway through the 2020 NASCAR season at Stafford Speedway, Street Stock driver Jason Lafayette finds himself sitting atop the points standings.  Lafayette has guided his #21 Tri-State Equipment Repair Chevrolet to 2 wins in 7 races thus far but things haven’t been as smooth as they might appear.  Lafayette operates as mostly a one-man crew and after losing his job last November he started up his own business, Tri-State Equipment Repair.  With how busy Lafayette has been with his business, it leaves little time to work on the car during the week and Lafayette almost skipped the night of his first win this year on July 24.  Needless to say Lafayette is very happy that he decided to race that night.

“I’m just a one man band and it’s difficult to do normal things with the car,” said Lafayette.  “I’m the guy that makes the sandwiches, packs the cooler, packs the trailer, loads the car, works on the car, it’s all me.  I’d love to have all kinds of help with the car.  To win that first race this year when I almost didn’t come to the track that night has been very motivating.  I was thinking my shot at the points might have passed me by but things have gone our way.  It feels good to be leading the points right now but it’s still only halfway through the season and there’s 2 strong cars with Meghan [Fuller] and Zack [Robinson].  Right now I’m just trying every little bit to pick up some more speed with the car but to be leading the points right now isn’t a bad deal.” 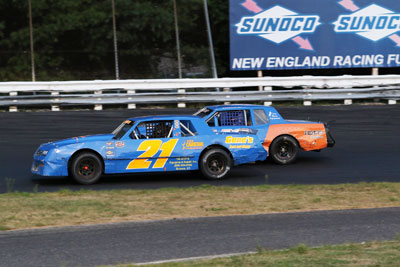 With 2 wins already in the first half of the 2020 season, Lafayette may have found the key to maintaining his success over the second half of the year.  After recording his second win of the season last Friday night, Lafayette took apart the front end of his #21 car after feeling like something wasn’t quite right and he found a bad spring.

“I knew something was wrong with the car with how it had been handling the last couple weeks and even though we won last Friday night, the car was anything but good,” said Lafayette.  “The fact that we won that race was a gift.  I ripped the front end apart and found that my left front spring was around 100 pounds shy of what it should be.  I’m hoping that fix will make the car even better than it was at the beginning of the season but we’ll see how the car responds.  If the car is back to being as good as it was at the start of the season, then I think we can have a good shot at running with those guys and contending for the championship.  Time will tell.  All I ever hope for is to be able to be as quick as the fast cars and have a good, hard race.”

Lafayette is in his third season of Street Stock competition at Stafford after running a partial SK Light schedule from 2012-2016.  Although he missed several races last season, Lafayette was able to win twice and it was an unexpected favor during the season from a friend that has helped set Lafayette down his current path in the Street Stock division. 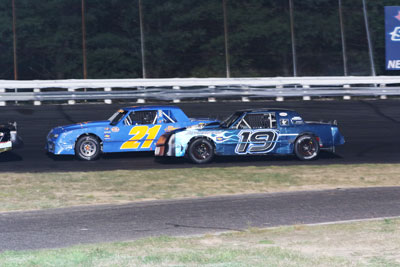 “Last year Frank L’Etoile was doing some fabrication work for me and one day he asked me if he could set my car up for me and I think that was a turning point for us,” said Lafayette.  “I think last year I was actually more consistent but I had to take some time off because my daughter had state championships.  Also last year I was able to learn the car setup and how to fine tune it and having that information this year, we’ve been quick right out of the box.  I think that learning the track and how to drive the track was a big thing for me.  I wish I had that information back when I raced in the SK Light division, I think things might have gone differently for me.”

With 2 wins and the point lead, Lafayette heads into this Friday night’s Stafford Weekly Racing program with equal bits of excitement and concern.  With a new left front spring Lafayette’s #21 car should theoretically be much better but not knowing exactly how the car will react to the new setup has Lafayette anxious with anticipation.

“I wish I could take the car out on the track right now to see how it’s going to react, but we’ll have to wait until Friday,” said Lafayette.  “The car could be right back to where it was or it could be totally out to lunch.  From here on out I just have to make sure that I do all the maintenance on the car that needs to be done so I can keep the car reliable and do well for my sponsors Tri-State Equipment Repair, Tommy’s Tattoo Supplies, and Gene’s Ford and Chevy.”

Lafayette and the Street Stocks will join Stafford’s SK Modifieds®, Late Models, SK Lights, and Limited Late Models in feature action this Friday night, August 28th.  Tickets for this Friday night’s Stafford Weekly Racing program are on sale now through the Stafford Speedway website with adult general admission priced at $20.00, $5.00 for kids ages 6-14, kids 5 and under are admitted free of charge when accompanied by an adult, and paddock passes are priced at $40.00.