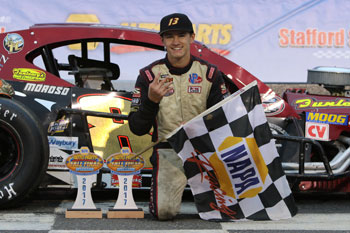 (Stafford Springs, CT)—After a roller coaster 2017 season that was filled with highs and lows, Marcello Rufrano and the #88 Wheelers Auto team have their sights set on contending for the SK Light championship in 2018. Rufrano has proved to be a quick study behind the wheel of a modified, having won his very first start in 2016 and he tied Cory DiMatteo for the division lead in wins with 4 this past season. In addition to chasing the SK Light championship in 2018, Rufrano has registered for Stafford’s Open Modified 80 events, scheduled for June 8th and July 13th.

“Last season we had plenty of ups and downs for sure,” said Rufrano. “The first couple races really didn’t play into our favor but we had really fast cars in practice and for whatever reason we couldn’t put together a feature. I think as the season went on and we picked up some momentum, we were one of the dominant cars. We met most of our expectations last season and our goal for this season is to start off just as dominant as we were at the end of last season. The championship has been a dream of mine since I was a kid but I’ve never really gotten the championship deal down.” 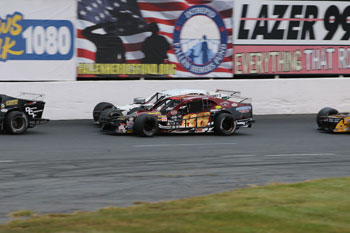 If Rufrano is going to contend for the championship, he will have to avoid the bad luck that plagued him during the first three races of last season. Rufrano recorded finishes of 24th, 26th, and 26th in his first three starts of 2017, which left him 30th in the points standings and 120 points behind the leader. But Rufrano and the #88 team didn’t let that slow them down as over the final 14 races, they recorded 4 wins, 10 top-5 and 12 top-10 finishes, which included 7 top-2 finishes. Rufrano’s solid finish to the 2017 campaign saw him climb all the way up to fourth in the final points standing.

“We did have some issues in the first couple of races, but we never really let that get us down,” said Rufrano. “We worked hard and never put ourselves down with the bad times. We just took each week as it was and ended the season on a good note. Throughout the season we got better as a team and I understood Jimmy Fuller (crew chief) better with what he was doing with the cars to make them faster. We were definitely hitting on some things later in the season, it was just a matter of putting it all together to get good finishes. Jimmy really taught me how to be patient and let the race come to me rather than going out there and rushing to get to the front. I feel like we have really good equipment, an all-star team, and we some really good support.” 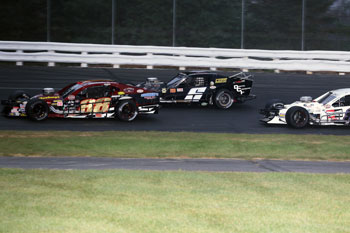 Should Rufrano run into any rough patches, he has the option of calling on two of the best in the paddock area in his Wheelers Auto teammate Keith Rocco and crew chief Jimmy Fuller.

“With having Keith in the stable, he’s been a great person to lean on for information,” said Rufrano. “He has a map of every track that he races at in his head and you don’t have to be afraid to ask him for advice because he’s a dictionary just waiting to be read. I’m lucky to have someone like him to lean on and ask about how the car is handling and what direction to go in. Jimmy Fuller is also a great resource to have. He’s been around since before I was born and he has more racing knowledge than I could ever dream of having. With the combination of Jimmy and Keith, I don’t think I could be in a better situation. They’re two of the brightest people in the pits for sure.” 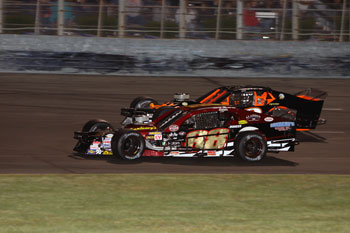 In addition to having his focus set on trying to win a championship, Rufrano is also looking forward to being able to race against some of the same competition he raced against on Monday nights in the Wild Thing kart ranks.

“There’s always good competition at Stafford and this year there’s going to be a few new young guns moving up who I raced against in Wild Thing Karts like Mikey Flynn and Bryan Narducci,” said Rufrano. “I’m really looking forward to racing against them and I can’t wait for the season to get started. It’s a pretty cool deal that we all raced together in Wild Thing Karts and now we’ll be racing together again in the SK Lights.”

As Rufrano has been busy preparing his #88 machine for the 2018 season, he is overflowing with excitement and can’t wait to get back on the track to go racing. 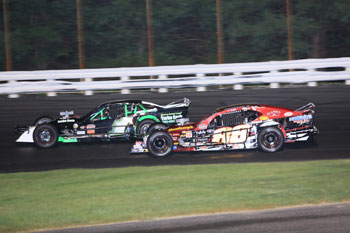 “I have not stopped talking or thinking about racing since the Fall Final ended,” said Rufrano. “I’ve been the biggest pain in my father’s butt to get the season rolling. I have my helmet polished and sitting on my dresser waiting to get started. I’d like to thank all our sponsors for their support last season; my father and Wheelers Auto Service, I can’t thank him enough, Ligouri Plumbing & Heating, Atlas Car Recycling, Chuck and Eddie’s Used Auto Parts, Doug Dunleavy and Dunleavy’s Truck & Trailer Repair, Romano Landscaping and Construction, Wilson Maturo Motors, and Bruneau’s Auto Body. It’s a lot of family friends coming together to help me and I appreciate all of their support.”

Rufrano will begin his quest for an SK Light championship at the 47th Annual NAPA Auto Parts Spring Sizzler® on April 27-29. Tickets for the “Greatest Race in the History of Spring” are on sale now at the Speedway Box Office. Tickets are priced at $40.00 for adult general admission tickets, $5.00 for children ages 6-14, and children ages 5 and under are admitted free of charge when accompanied by an adult. Reserved seating is priced at $42.00 for all ages. As always, Stafford Motor Speedway offers free parking with overnight parking available. All tickets are good for both Saturday and Sunday admission. All ticket prices include 10% CT Admission Tax. Discount Spring Sizzler® tickets will be available beginning in March at participating NAPA Auto Parts stores.