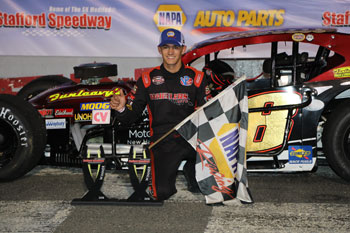 (Stafford Springs, CT)—When Stafford’s SK Modified® division hits the track for the season opening NAPA Spring Sizzler on April 26-28, defending SK Light champion Marcello Rufrano will be living a dream by being part of the starting field. Rufrano will make the jump from the SK Lights into the premier SK Modified® division in 2019 and he will go back to his original number 48 on his Wheelers Auto sponsored modified.

“It’s been a dream of mine to race in the SK Modified® division since I got started racing,” said Rufrano. “I’ve wanted to race against Keith Rocco, Ronnie Williams, Matt Galko, and all those guys since I started racing and to finally achieve that goal is pretty cool.   This is something that my Dad and I have joked about since I was younger. We’ve gotten better and better as a father/son combination, without my Dad none of this would be possible. He’s always been the guy that’s been there in my ear as we try to win races. To be racing SK’s this season with my Dad and Jimmy Fuller as the crew chief is pretty cool. Keith [Rocco] has been racing the 88 for a while now and 48 was my first number in the DARE Stocks so I figured I’d go back to my roots this year. I’m hoping I can make that number famous across the short tracks in New England.” 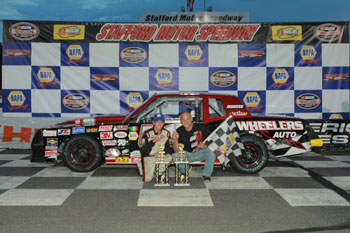 Rufrano’s journey to the SK Modified® division has been a quick progression through the ranks and Rufrano has found plenty of success thus far at Stafford. Rufrano was a DARE Stock rookie in 2015 and he won twice before splitting his 2016 season between the DARE Stock and SK Light divisions. Rufrano won his very first SK Light start in 2016, and he followed that up with 4 more wins in 2017. Rufrano reached the pinnacle of the SK Lights this past season by winning 6 races and the championship. Rufrano knows the competition in the SK Modified® division presents a tough challenge but he is eager to continue his winning ways at Stafford. 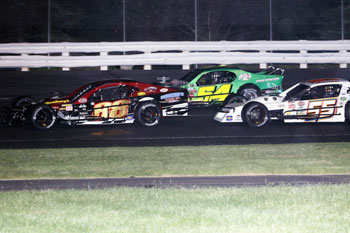 “I’ve gone from DARE Stocks to the SK Lights and now to the SK Modified® division and looking back, it wasn’t too long ago I was racing go karts on Monday nights,” said Rufrano. “Rookie of the Year is definitely a goal on my mind. If we can get at least one win this year, that would make my season and there would be a huge celebration for sure and it would be one of my best accomplishments in racing. We could be the quickest guy out there or we could be mediocre, but we won’t know until we hit the track for the Spring Sizzler. I’m sure we’ll be pretty good since we have a fast car and I have one of the best crew chiefs in the business, but I definitely have a lot more to add to my notebook before I’m on the same level as some of the guys who have been racing SK’s for a long time.” 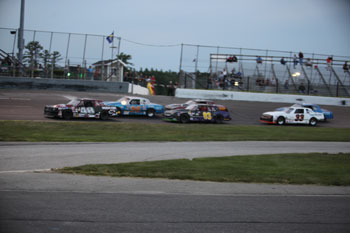 Although Rufrano will be a newcomer to the SK Modified® division in 2019, he has already made two starts at Stafford and he won a race and finished 5th in points in the Sunoco Modified division at Thompson Speedway in 2018. Rufrano finished 11th in the 2017 NAPA Fall Final SK Modified® feature event and he was running with the leaders in the 2018 NAPA Fall Final SK feature before a flat tire took him out of competition. With his experience and the leadership of Jimmy Fuller turning the wrenches on his #48 car, Rufrano is cautiously optimistic about his chances at running up front and taking a win as a rookie driver.

“I got my feet wet in the Sunoco Modifieds at Thompson and we showed pretty good there and we were in the top-5 at the Fall Final at Stafford before we had a right rear tire go down, which kind of ended our day,” said Rufrano. “Those runs give us some pretty good confidence going into the 2019 season and hopefully we can chase some wins. I’m not getting my hopes up too high for 2019 knowing I’m going to be racing against some pretty tough competition. I have great support from Wheelers Auto, Dunleavy’s Truck and Trailer Repair, Liguari Plumbing, Maturo Motors, Tick Mike, Moroso, and Waddell Communications so we’ll see how things go.”

The 2019 SK Modified® season will kick off at the 48th Annual NAPA Spring Sizzler® on April 26-28. Tickets for the “Greatest Race in the History of Spring” are on sale now by calling the Speedway Box Office 860-684-2783 or online at www.staffordspeedway.com.