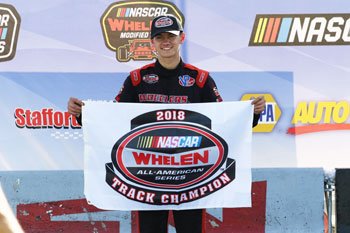 (Stafford Springs, CT)—In one of the most thrilling championship battles in Stafford history, Marcello Rufrano outlasted Bryan Narducci in the race for the 2018 SK Light championship. The fight for the championship came down to the final race of the season with Rufrano and Narducci tied in the points standings with whoever finished in front of the other in the season ending NAPA Fall Final would become champion.

“This feels great,” said Rufrano. “The championship was something that I had my mind set on since the beginning of the season. To be able to finally accomplish something I had my mind set on is really cool because usually when I plan things out, they don’t go as planned. At the end of the day we’re champions and I couldn’t be more proud of this team and what we were able to accomplish this season. To add my name to the list of drivers who have won multiple races and a championship in the SK Light division is very special to me.” 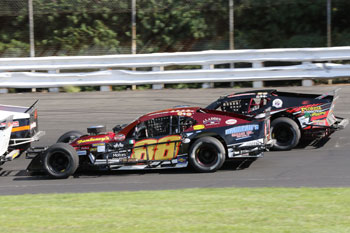 Rufrano and the #88 Wheelers Auto Service team came out of the box swinging this season, scoring wins in 3 of the first 6 SK Light feature events. While Narducci wasn’t winning races at the same rate as Rufrano, he was consistently taking home podium finishes, after the first 6 races the two drivers were tied in points. Rufrano and Narducci swapped the point lead throughout the month of June with Rufrano holding a narrow lead at the end of the month. Narducci scored a win and three third place finishes during July to head into August with a 34 point lead and maintained the point lead through August. He looked to be in prime position to win the title with back to back wins on Aug. 31 and Sept. 7. A 15th place finish for Narducci combined with a second place run for Rufrano in the Final Friday Night Shoot Out left the two drivers tied in points, setting up a showdown in the NAPA Fall Final. The two championship contenders raced hard in the Fall Final SK Light feature and while they were challenging for the race lead, the two wrecked hard going into turn 3. With Rufrano holding the lead on the last completed green flag lap by a nose over Narducci, he was scored in front of Narducci in the final feature finish rundown and he took the championship by a 2 point margin. 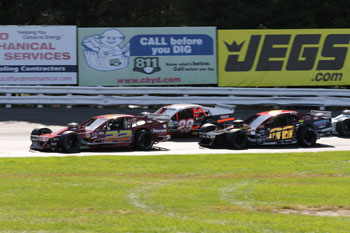 “We definitely started out as a championship team and as the season progressed we struggled a little bit,” said Rufrano. “What really made the season for us was the last 4 races where we finished on the podium or won the race. It’s really special to me to say those races made the difference for us. The way it ended was bittersweet but we got everything we needed to get out of that race car. The first thing I asked the safety crew that came over to check me out was did I win the championship, never mind how I was feeling or how banged up I was. I wanted to know if we won the championship or not.”

The race for the championship between Rufrano and Narducci goes back to when they were rivals in the Wild Thing Kart Series that races at Stafford on Monday nights. With the two drivers being good friends away from the track as well as at and on the track, racing for the championship was something that the two had discussed as kids and made a reality this year. 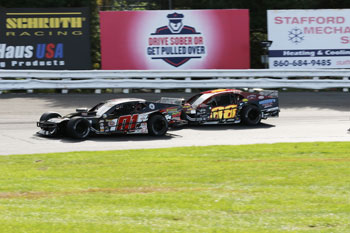 “It was petty cool to race with Bryan for the championship since we’ve been racing against each other since we were in Wild Thing Karts,” said Rufrano. “The way we would talk back then you’d think that we would both be driving in the Cup series by now. But realistically we did think that one day we would have the chance to race against each other in either the SK Lights or SK Modifieds®. This year we would always talk about who was going to win the championship. I think we both just tried to have as much fun with it as we could.”

Rufrano is quick to credit his crew and his sponsors for helping him to achieve his goal of becoming a champion at Stafford.

“I wouldn’t have been able to do this without the support of my parents, my crew, Jimmy Fuller, my brother and uncle, they all gave me 100%,” said Rufrano. “A big thanks goes out to my sponsors Wheelers Auto Service, Bruneau’s Garage, Chuck and Eddie’s Used Auto Parts, Ligouri Plumbing and Heating, Aladdin Awnings, Wilson Maturo Motors, Atlas Recycle, and Tick Mike who came on at the end of the season, they are all great supporters,” said Rufrano. “Doug Dunleavy really stepped up and helped us out and I can’t thank him enough as well.” 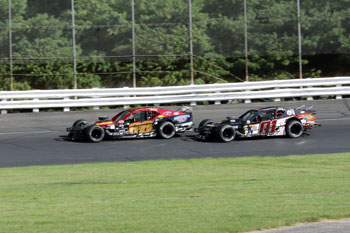 Now that he is the 2018 SK Light champion, Rufrano will be looking to make his mark in the SK Modified® division for the 2019 season. Rufrano made his SK Modified® debut at the 2017 NAPA Fall Final where he finished 11th. Rufrano once again pulled double duty at the 2018 Fall Final and he was running in the top-5 before a flat tire brought him to pit road and he ended the race in 14th place. With such a strong effort, Rufrano is already looking ahead to the 2019 season and can’t wait to get his SK Modified® rookie season started.

“Our plan was to go SK racing next season so this was a great way for me to learn how to race against the SK guys and how to be competitive with them,” said Rufrano. “The car is a proven car and it’s won races with Eric Goodale and myself at Thompson and to show the speed that we had against guys like Mike Christopher and Keith Rocco, we might have a shot at winning a race next season. I’ve been watching the SK Modifieds® since I was a kid and it’s going to be really cool to be a part of that division next season. I think the next few years at Stafford are going to be enjoyable once Bryan [Narducci] gets into an SK Modified®.”

Rufrano will officially be crowned 2018 SK Light Champion at the 49th Annual Stafford Speedway Champion’s Awards Banquet, scheduled for Friday, November 16 at Maneeley’s in South Windsor. Tickets to the awards banquet are $50 and are on sale now through the Stafford Speedway Box Office. Tickets can be ordered by calling the track at 860-684-2783 or they can be ordered online by CLICKING HERE.