Matt Galko Geared Up for Double Duty At Stafford 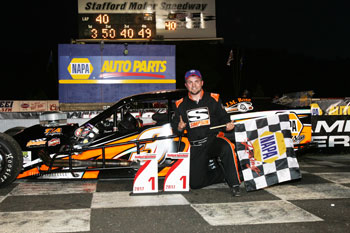 (Stafford Springs, CT)—When the green flag falls on the Valenti Modified Racing Series this Friday night, September 1st, Meriden native and SK Modified® regular Matt Galko will be racing double duty as he will drive the #76 Norm Perry owned machine in the VMRS 80 as well as his familiar #3 SK Modified®. Galko has made one previous start at Stafford with the Perry team back in August 2014 where he finished 14th.

“Norm Perry does the engines for the SK car that I drive at Waterford so I got to know the family,” said Galko. “Talking with them over the past couple of years, they’re a family oriented team so they usually have either Dennis or Shelly driving the car. This was a good opportunity for me to get some experience behind the wheel of a tour type modified car. I drove for them back in 2014 at Stafford, which was my first time in a tour type car and we ran the Tri-Track race at Star last weekend. We finished 10th, which was pretty respectable with the competition at Star and not having a lot of experience. I think a top-10 would be a good goal for us. I’d like to finish all the laps and get as much experience as I can racing with the extra horsepower.” 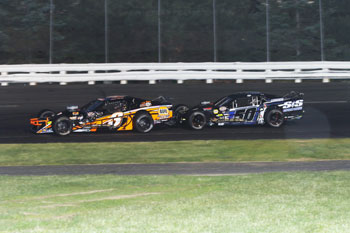 Having raced weekly at Stafford since the 2010 season in both the SK Light and now SK Modified® divisions, Galko feels like his weekly experience at Stafford will help to overcome the lack of experience he has as a driver/team combination with the Perry team. Galko will be looking to build upon the 10th place finish he enjoyed last week driving the #76 car in the Tri-Track race at Star Speedway.

“I feel like I have a leg up on some of the guys who only have a few starts at Stafford,” said Galko. “I think running full time at Stafford for the past 8 years, I know the track like the back of my hand, just not as much as some of the really experienced guys who have been racing at Stafford since before I was born. Having worked with these guys a couple of times before, we know how to communicate with each other and we get along really well. It can be tough to dial in a car with not really being familiar with each other, but at least we’ve had some experience together, which should help us get the car where it needs to be.” 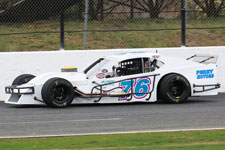 If there is one area where Galko’s lack of experience might show up, it would be the balance between trying to save his tires in order to be able to race hard at the end of the race. VMRS rules require one set of tires for the qualifying heats and the race, meaning Galko will have to figure out how to best make his tires last for the 10-lap heat race and the 80-lap feature.

“I don’t have a lot of experience saving tires,” said Galko. “I’ve run a few tour type races this season so I know how to save tires and what you need to do and how the car needs to be at the beginning of the race in order to be where you want to be at the end of the race. A lot depends on where you start in the heat race. If we have a good starting spot and we can get out front and set our own pace, we’ll save the tires for the feature. If we’re in the back and struggling then it would be the same thing, we’ll cut our losses and try to save the tires for the feature. I ran the SBM 125 at Star earlier this year and we didn’t pit and ended up in the lead and we were running first and then second about 85 laps in the race and we stayed there until we had a mechanical problem. That showed me what I had to do to save tires but I can’t be too cocky about that with only having about a half dozen starts in a tour type car. It’s not a 40-lap SK® race, we have to be there at the end of 80 laps. It’s a little bit different style of racing than what I’m used to, but I don’t think it’s something that I can’t adapt to.”

The Valenti Modified Racing Series will joined in feature action by Stafford’s five NASCAR Whelen All-American Series divisions and there will be a fireworks presentation at the conclusion of feature racing events. As part of the night’s action, fans will also be able to walk the track for a $10 donation to the Intrepid Fallen Heroes Fund, which will be collected by NAPA reps. The track walk will take place following the conclusion of the VMRS qualifying heats and before the feature events get started. Tickets for Friday, September 1st VMRS 80 event are on sale now and priced at $30.00 for adult general admission tickets, $5.00 for children ages 6-14, and children ages 5 and under are admitted free of charge when accompanied by an adult. Reserved seat tickets are $32.00 for all ages. All ticket prices include 10% CT Admission Tax. Stafford Motor Speedway offers plenty of free parking along with overnight parking available for self contained Recreational Vehicles.