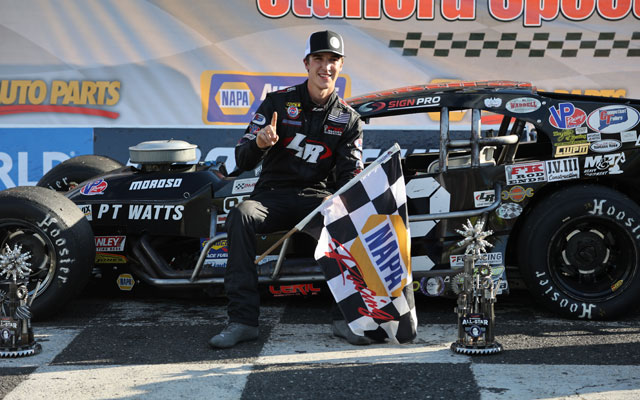 (Stafford Springs, CT)—Stafford Speedway played host to the TickMike.com SK Modified® All-Star Shoot Out as part of the Superstar Racing Experience event held Saturday night, June 12th.  The 50-lap race was broken down into three segments with the first 2 segments 20 laps each and then the final stage was 10 laps.  Andrew Molleur won the first stage, but Michael Christopher, Jr. was the big winner of the night by winning the second stage and then winning the final 10-lap stage to take home a total of $5,000.

The 50-lap TickMike.com SK Modified® All Star Shoot Out took the green flag with Todd Owen and Teddy Hodgdon bringing the field to green.  Owen took the lead at the green flag with Marcello Rufrano going around Hodgdon for second on lap-2.  Andrew Molleur was on the move from his 5th starting position and he took the lead from Owen on lap-4.  Owen slotted into second with Hodgdon third, Michael Gervais, Jr. fourth and Rufrano in fifth.  This top-5 ran unchanged to the end of the first stage of 20 laps with Molleur taking the win and the $1,000 bonus that went with winning the first stage.  The top-10 cars were inverted after the first stage, which put Mike Christopher and Tyler Hines on the front row for the beginning of the second stage of 20 laps.  Andrew Molleur decided to restart the second stage in 15th place to set himself up for a potential $1,500 bonus if he won the final 10-lap stage.

Stage 2 began with Mike Christopher leading Tyler Hines, Michael Christopher, Jr., and the side by side duo of Marcello Rufrano and Michael Gervais, Jr.  Christopher, Jr. took the lead from his father on lap-26 and Rufrano followed him by to take second and drop Christopher back to third.  Gervais was fourth with Todd Owen up to fifth.  The caution flew with 28 laps complete for a spin on the backstretch by Bo Gunning.

Christopher, Jr. took the lead on the restart with Rufrano slotting into second.  Gervais was third followed by Christopher and Owen.  Mikey Flynn was side by side with Hines for sixth with Flynn taking the spot.  Rufrano took the lead from Christopher on lap-34 with a pass in turn 4.  The top-3 of Rufrano, Christopher, Jr., and Gervais were now locked in a 3-car train fighting for the lead.

Christopher went back to the lead on lap-37 while Rufrano was able to stay in front of Gervais and maintain second place.  Christopher was still fourth with Owen behind him in fifth.  Christopher took the checkered flag to win stage 2 with Rufrano, Gervais, Christopher, and Owen rounding out the top-5.  The top-5 cars inverted for the final 10 lap stage, putting Owen and Christopher on the front row.  Christopher, Jr. elected to start the final stage in 5th rather than restart 10th and go for the $2,500 bonus if he could win the final stage.

The final stage kicked off with Owen and Christopher touching wheels going into turn 1, which allowed Christopher, Jr. to take the lead.  Owen slid back to fourth while Christopher was fifth.  Hinews was up to second with Teddy Hodgdon in third.

Owen got around Hodgdon to move back up to third on lap-43 while Hines was looking for a way to get by Christopher for the race lead.  Hodgdon came back on Owen and retook third place on lap-48 while Hines was still giving chase to Christopher, Jr. for the lead.  Christopher, Jr. led Hines to the checkered flag to win the TickMike.com SK Modified® All-Star Shoot Out and the $4,000 prize.  Hines finished second with Hodgdon, Owen, and Christopher rounding out the top-5.