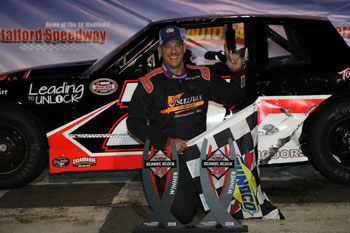 In the 25-lap Casagrande Builders Street Stock event, Greg DeMone took the lead at the green with Chris Bagnall moving up to second. Vince Gambacorta took third with Rob Sears sliding back to fourth after starting on pole and Travis Hydar was fifth. Richard Ciriello spun in turn 4 but everyone was able to avoid him and he did a 360 spin and kept going to keep the racer under green flag conditions. The caution came out with 5 laps complete as Sears spun in turn 1 and collected the car of George Bessette, Jr.

Demone took the lead back under green with Bagnall and Hydar behind him. Behind the lead trio, Brandon MIchale went 3-side to get by both Michael Hopkins and Johnny Walker to move into fourth. Walker took fifth with Hopkins slotting into line in sixth.

Walker made a move to the inside of Michael on lap-11 to move into fourth and he brought Hopkins with him up to fifth as Michael slid back to seventh as Zack Robinson took sixth. Hopkins was applying heavy pressure to Walker and he was able to make a pass stick in turn 4 on lap-13 to move up to fourth. Robinson and Michael followed Hopkins through to drop Walker back to seventh. The caution came out with 16 laps complete for a spin by Vince Gambacorta in turn 4 with Demone still leading Bagnall up front.

Bagnall took the lead from DeMone on the restart with Hopkins trying to hold off DeMone for second. Hopkins got clear to second on lap-18 with DeMone settling into third. Walker was fourth with Hydar right behind him in fifth. Hopkins took the lead from Bagnall on lap-19 and that opened the door for DeMone to move into second. Hydar took third with Michael fourth and Walker fifth as Bagnall slid back to sixth in line. Walker and Hydar touched in turn 1 with Hydar nearly spinning out to bring the caution out. Walker was sent to the rear of the field for making contact with Hydar.

Hopkins took the lead on the restart with Michael in second. DeMone was third in line with Meghan Fuller up to fourth and Bagnall fifth. Hopkins led Michael to the checkered flag to take his first win of the 2018 season. DeMone finished third with Fuller and Bagnall rounding out the top-5. 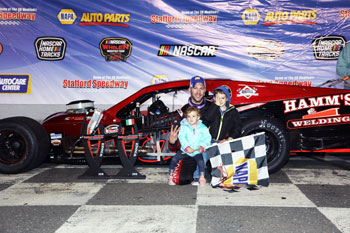 Cipriano took the lead from Wood on lap-6 and Kopcik followed him by to move into second. Wood slid back to fourth place as Reen took third and Todd Owen was now up to fifth. Tom Bolles spun in the middle of turns 3+4 to bring the caution out with 12 laps complete.

Cipriano took the lead on the restart but the caution came back out as Dan Wessons spun in turn 1 and collected Tony Membrino, Jr. before a host of cars took a spin through the backstretch grass.

Kopcik worked his way back to the front on the restart with Cipriano and Todd Owen side by side for second. Reen and Keith Rocco were side by side for fourth but that quickly changed on lap-16 as Owen took second and Rocco pulled alongside Owen on the outside. Going into turn 3, Reen touched tires with Owen and that set off a chain reaction that collected several cars and brought out the caution flag with 16 laps complete.

Rocco charged into the lead on the restart and Eric Berndt came up to second with Michael Christopher, Jr. third, Kopcik fourth, and Michael Gervais, Jr. fifth. Berndt nearly took the lead from Rocco on lap-21, but Rocco was able to fend off his challenge in turn 4. Things began to settle in and with 10 laps to go it was still Rocco in front with Berndt hot on his trail in second. Christopher, Jr. was third with Kopcik in fourth and Gervais in fifth. Zach Leone spun coming out of turn 2 to bring the caution out with 36 laps complete and set up a 4-lap dash to the finish.

D.J. Burnham spun in turn 1 on the restart to bring the caution right back out. The next restart saw Christopher, Jr. nearly stick his car in a 3-wide move for the lead but he settled back into third as Rocco and Berndt were side by side for the lead. Berndt slotted back into single file on lap-38 and he nearly made a pass in turn 2 before backing out of the move. Berndt made one last ditch effort to take the lead but Rocco led him to the checkered flag to pick up his third win in three races to start the season. Christopher, Jr. finished third with Kopcik and Gervais rounding out the top-5. 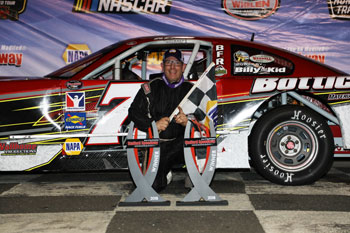 In the 30-lap Late Model feature event, Tyler Leary streaked into the early lead with Darrell Keane slotting into second with Tom Fearn in third. Mike Quintiliano was fourth but he was under heavy pressure from Paul Arute for the position and Arute was able to take over fourth on lap-5. One lap later saw Fearn move by Keane to take over second place while Leary was still out front.

Fearn quickly ran Leary down and on lap-11 he made a move in turn 4 to take over the race lead. Arute was looking to make a pass on Keane for third but Keane was able to maintain third while Quintiliano was still in fifth. The caution came out with 17 laps complete for a spin in turns 3+4 by Michael Wray.

Fearn streaked back to the lead on the restart but his car began to puff smoke out the rear end. Keane slotted into second with Arute third, Leary fourth and Cliff Saunders was fifth. The cauiont came out with 19 laps complete for a spin in turn 2 buy Cliff Saunders and Chase Cook. Under the caution flag, Fearn was black flagged and he reported to his pit stall where his team went to work under the hood. Fearn went back out on the track but came right back to pit road. Fearn’s car appeared to have an oil leak and his misfortune put Keane and Arute on the front row for the restart with Leary and Al Saunders in the second row.

Al Saunders spun and backed into the wall on the restart to bring the caution right back out. Glen Reen was parked by race officials for the remainder of the race for making contact with Saunders.

Keane took the lead back under green with Leary and Arute locked in a side by side duel for second. Leary got clear of Arute on lap-21 and his move opened the door for Wray to stick his nose to the inside of Arute and challenge for third. Wray completed the pass on lap-22 and Cook followed Wray to take fourth from Arute, who dropped back to fifth in line.

Up front, Keane and Leary were in a nose to tail battle for the lead with Wray in third. Arute came back strong and moved back into fourth with Cliff Saunders in fifth as Cook slid back to seventh in line. Keane held Leary off to the checkered flag to pick up his first career Late Model feature win. Wray finished third with Arute and Cliff Saunders rounding out the top-5. 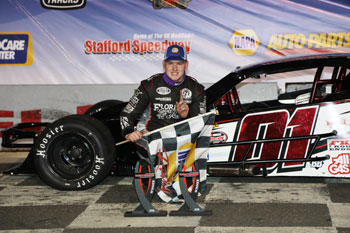 In the 20-lap SK Light feature event, Wesley Prucker charged into the lead at the green with Glenn Griswold using the outside line to his advantage to power his way into second. Alexander Pearl was third with Cassandra Cole and Todd Douillard side by side for fourth. Cole took fourth with Geoff Nooney now side by side with Douillard for fifth on lap-4 as Griswold was locked on the back bumper of Prucker in a fight for the lead.

Back in the pack, George Nocera, Jr. nearly went 4 wide coming off turn 4 on lap-7 to move up to eighth. Back up front, Cole took third on lap-8 from Pearl with Joey Ferrigno moving into foruth as Pearl slid back to fifth with Prucker still holding off a hard charging Griswold for the race lead. The caution came out with 9 laps complete for a spin in turn 4 by Mark Bakaj to slow the flurry of action.

Prucker the lead back under green while the car on the charge was Bryan Narducci. Narducci quickly worked his way through traffic and he took the lead from Prucker on lap-18. Narducci then led the field to the checkered flag to pick up his first win of his rookie season. Prucker finished second with Ferrigno, Nocera, and Griswold rounding out the top-5. 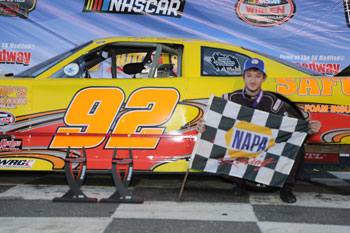 In the 20-lap Limited Late Model feature event, the first start was called back before Ryan Fearn made a 3-wide bid for the lead on the first lap but the caution flew for a half spin by Steven Midford in turn 2 that also involved Kevin Gambacorta.

Gary Patnode took the lead on the next restart with Ryan Fearn taking second. Gambacorta pulled off the track after the first lap and was done for the evening. Duane Provost was third in the early going with Alexandra Fearn in fourth and R.J. Surdell in fifth.

Patnode was able to hold the lead until lap-6 when Ryan Fearn’s heavy pressure translated to a pass for the lead in turn 3.   Alexandra Fearn moved into second with Provost taking third, Surdell fourth and Justin Bren fifth as Patnode slid back to sixth in line.

At the halfway point of the race, Ryan Fearn was still out front with his sister Alexandra holding down second with Provost right behind her in third. Bren and Surdell were locked in a side by side duel for fourth and Bren was able to finally make a pass stick to move up to fourth on lap-14.

Ryan Fearn led Alexandra to the checkered flag by a comfortable margin to take down his first win of the 2018 season. Provost came home third with Bren and Surdell rounding out the top-5.