MTS 125 Getting Schooled at Stafford

“Every year this partnership keeps getting better,” said said Rob Wargo, Eastern Connecticut High School Admissions Reps for Lincoln Tech. “We’ve had nothing but success with the Stafford program which is geared towards finding the prospects that we’re looking for at Lincoln tech. It’s been a shared partnership where we both feed off of the other’s strengths and it’s been nothing but good things. We’ve done Modifieds, Late Models, and the Back 2 Skool night in the past and looking at the 2017 schedule we saw the Modified Touring Series coming to Stafford for the very first time so we thought, let’s be part of that race. It’s something different than we’ve done in the past and we’re excited. Every year we get enrollments from our events and we’ve also made a lot of liaisons with employers we’re able to work those leads through our career services department. When people see me now, they don’t refer to me as the Lincoln Tech guy, they call me the Stafford guy, so that’s a pretty good thing and it shows just how much this partnership has been working for us.” 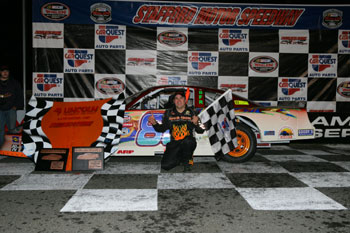 The origins of the Stafford-Lincoln Tech partnership dates back prior to the 2010 season when Kris Fluckiger, who was a DARE Stock driver and also a Lincoln Tech student at the time, brought the two parties together and resulted in Lincoln Tech sponsoring the Late Model 100 that season. Fluckiger will serve as the grand marshal of the Lincoln Tech 125 and he will send the modified field on its way with the most famous words in motorsports.

“We’re going to have Kris Fluckiger serve as the grand marshal of the race,” said Wargo. “He was a student at Lincoln Tech and he was the one responsible for getting us in touch with Stafford Speedway. This is a great way to repay him and thank him for getting us going with this partnership with the track.”

Lincoln Tech will also once again present a unique trophy to the winner of the Lincoln Tech 125 as well as special trophies for the winners of the NASCAR Whelen All-American Series feature events that night. Lincoln Tech began a tradition of presenting an airbrushed car hood to race winners with the 2010 Late Model 100 event and last season with the Summer Olympics in effect, they presented gold, silver, and bronze plaques to the top-3 finishers from each feature event. 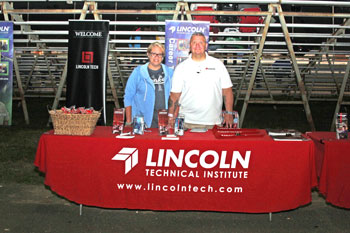 “We’re going to do a first through third with the gold, silver, and bronze plaques again for all the other feature events and we’ll plan on doing something special for the MTS winner,” said Wargo.

From its beginnings as Lincoln Technical Institute in 1946 to its current status as one of the nation’s leading providers of career education and training, the Lincoln Group of Schools are part of Lincoln Educational Services Corporation and are committed to providing students with the quality, hands-on skills and training they need to succeed in an ever-changing employment landscape. Lincoln currently operates over 28 campuses in 15 states all across the nation, offering curriculum in Automotive, Health Sciences, Business & I.T., Trades, Spa & Cosmetology, and Culinary Arts. The East Windsor branch specializes in the fields of Auto, Collision, Diesel, Electrical, HVAC, Welding, and Audi Auto. For more information about Lincoln Technical Institute and the programs they have to offer, please visit www.lincolnedu.com, or contact them by calling 1-800-243-4242.