Posted on December 7, 2017 by Scott Running Posted in News 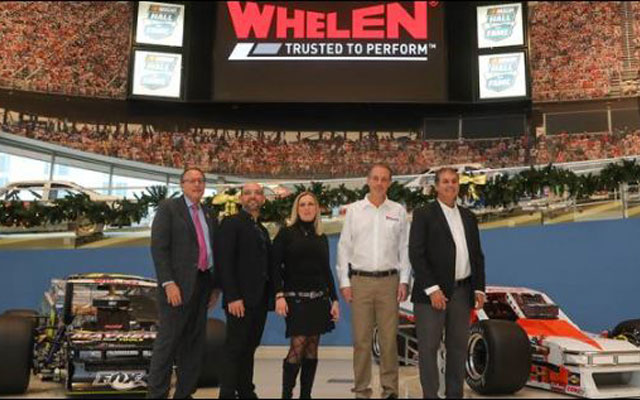 “More than a decade of successful partnership has resulted in Whelen Engineering being deeply connected to many levels of our sport,” said Jim Cassidy, NASCAR senior vice president of racing operations. “The NASCAR Whelen Modified Tour and NASCAR Whelen Euro Series are critical to reaching fans, developing talent and delivering great racing both domestically and abroad.”

The NASCAR Whelen Modified Tour, NASCAR’s oldest division of racecars, is the premiere asphalt modified circuit in the nation. With a history dating back to Daytona Beach in 1948, the tour features a mix of passionate, veteran drivers with emerging young talent and includes races from New England to South Carolina.

“Whelen Engineering has played a big role in NASCAR for many years and we are ecstatic to continue to support the sport with this extended relationship,” said Phil Kurze, Whelen Engineering vice president of motorsports. “Our ability to build brand and product recognition nationally and internationally due to our partnership helps drive our business and reach new customers.”

The NASCAR Whelen Euro Series, the official NASCAR series based in Europe, has global appeal with 21 nations represented. Since becoming a NASCAR touring series in 2012 and obtaining the Whelen entitlement in July 2013, U.S. drivers such as Bobby Labonte, Jeffrey Earnhardt and Ben Kennedy have competed abroad. NASCAR Whelen Euro Series cars are also featured in the annual international Race of Champions.

“The NASCAR Whelen Euro Series is honored to have Whelen Engineering continue its title sponsorship,” said Jerome Galpin, NASCAR Euro Series president. “Whelen has helped NASCAR introduce exciting, door-to-door, American racing to a passionate motorsports fan base in Europe and we look forward to growing the series together in the years to come.”

A 10-year renewal with the NASCAR Hall of Fame as the title sponsor of the “Whelen Hall of Champions” was also announced today. Since opening in 2014, the exhibit has honored nearly 600 national and regional championships from the sport’s current and past series. The Hall also houses the “Everyday Champions” display, which honors first responders from across the country.

“We are thrilled with the multiyear extension of the NASCAR Hall of Fame’s partnership with Whelen Engineering. Through the Whelen Hall of Champions exhibit, we recognize every national and touring series champion in NASCAR history to date,” said Winston Kelley, NASCAR Hall of Fame executive director. “The ceremonial unveiling each year in association with the NASCAR Whelen All-American Series and NASCAR Touring Series banquet has become a celebrated moment for this partnership.”

Whelen Engineering is a leading manufacturer of automotive, aviation, industrial and emergency vehicle lighting. In addition to its entitlement, Whelen will continue to showcase their products across NASCAR tracks and pace cars.

Whelen designs and manufactures reliable and powerful warning lights, white illumination lighting, sirens, controllers, and high-powered warning systems for Automotive, Aviation, and Mass Notification industries worldwide. Every part of every Whelen product is proudly designed and manufactured in America and is tested on-site to meet the toughest industry certifications. On the road, in the air, and around the world, Whelen is trusted to be seen, trusted to be heard, trusted to perform.

For over 25 years Whelen has supported NASCAR and its grassroots racing series. Whelen is proud to provide the Official Warning Lights of NASCAR.