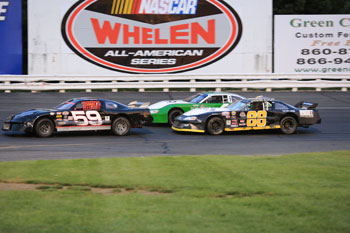 (Stafford Springs, CT)—After racing for three full seasons in Stafford Speedway’s Limited Late Model division, Wethersfield native Matt Clement heads into the 2018 season armed with two new sponsors. Clement’s #59 machine will carry sponsorship from Elmo’s Dockside Restaurant in Vernon and Aquatic Wildlife in South Windsor for the 2018 season and those sponsorships will give the #59 team a huge boost.

“The sponsorships are going to be huge for us,” said Clement. “As long as I’ve been racing the main issue for us has been spending money on new tires. With our new sponsors, we’ll be able to make sure we have good tires to last the entire season so we can try to race to the front every week and maybe get our first win.”

In addition to the new sponsors, Clement and his family owned #59 team will continue a relationship they began in 2017 with Jay Stuart working on the chassis setup. Clement already noticed a difference in his car’s performance last season and the combination of new sponsors and Stuart working on the chassis have Clement excited about his prospects for the 2018 season. 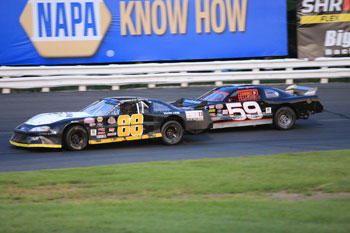 “This is probably the most excited I’ve ever been compared to years prior,” said Clement. “We finally have some marketing partners on board with us and I’ve had some conversations with my father about what our goals and expectations are for the season. Jay Stuart came on board with us towards the end of last season and made a couple of changes which immediately woke the car up. I feel like in the first few races this season we’ll be competitive and finishing up front. The week after Jay started helping us last year we finished fourth and then the next race we were running third and we got taken out unfortunately. Jay definitely has the magic touch. We’ve set the bar pretty high for ourselves and we’re looking forward to getting started. We’d like to be championship contenders this season and be fighting for our first win right away at the Spring Sizzler, especially with the new setup we’ve got going into the car.”

In his previous three seasons, Clement’s best finish was a third place effort during the 2016 season. Clement has improved his finishing position in the season ending points standings each year he has been racing and he is coming off a career best finish of 8th for the 2017 season. With all the necessary parts and pieces in place, Clement feels like his first win is just around the corner and all he has to do is figure out how to get around that corner. 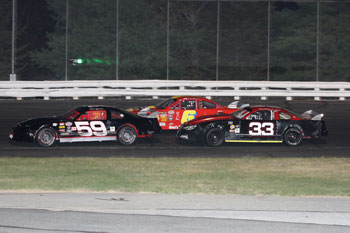 “I’m pretty confident we’ll be up front in the first couple of weeks,” said Clement. “They say the first win is always the hardest. We had a third place finish back in 2016 and I had never even had a top-5 finish before that. Every week since then has felt like a letdown because I know that we have the talent and resources. Between my crew chief Rob Valerio, myself, Bill Reiman, and my Dad, we have the knowledge to be up front, it was just a matter of having someone to put the initial setup in the car. I’m feeling confident that within the first couple of weeks we’ll finally be able to get that monkey off of our backs. My Dad raced for about 20 years without win. He had a couple of heat race wins but never a feature win. A win would be a huge confidence boost not only to myself as the driver, but my Dad as the car owner and Rob as the crew chief. We’re all looking forward to being able to run consistently up front.”

As Clement knows all too well, looking strong on paper is one thing while actually going out on the track and achieving his goals is another thing. Clement will have to deal with some strong competition if he is to collect his first career win and be a contender for the championship.

“A good season for us would be a top-5 finish in the points standings with at least one win,” said Clement. “We’ll see if we can get there this season. Duane [Provost] is going to be the biggest threat again this year, he’s got 2 championships in a row and he gets it done every week. I think Justin Bren will be tough coming back, and Jeremy Lavoie was always up front last year and he’ll be strong again, and so will the Fearns. It’ll be a difficult nut for us to crack getting up front but I think once we can get up there once or twice,that will be our game for the rest of the season. I have to give a big thank you to my Dad, Brian Clement, Rob Valerio, my girlfriend Sophia Marder, my brothers Jay and Scott Clement, and Bill Reiman for all their help and support.”

Clement will have his first opportunity at reaching NAPA Victory Lane at the 47th Annual NAPA Auto Parts Spring Sizzler® on April 27-29. Tickets for the “Greatest Race in the History of Spring” are on sale now at the Speedway Box Office. Tickets are priced at $40.00 for adult general admission tickets, $5.00 for children ages 6-14, and children ages 5 and under are admitted free of charge when accompanied by an adult. Reserved seating is priced at $42.00 for all ages. As always, Stafford Motor Speedway offers free parking with overnight parking available. All tickets are good for both Saturday and Sunday admission. All ticket prices include 10% CT Admission Tax. Discount Spring Sizzler® tickets will be available beginning in March at participating NAPA Auto Parts stores.