Nick Salva Off To A Good Start In SK Modified® Division 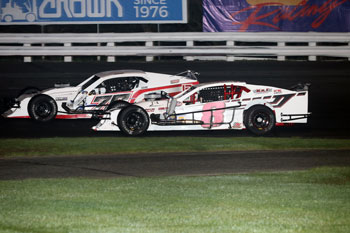 “I expected to run well this season, maybe not necessarily this well so early in the season, but I’ll take it,” said Salva. “We’ve always had a good car but I’ve just lacked experience with car setups. We’ve also never really had the funds or time to experiment with the car setup but we have Stash Butova on board with us this season and he’s really helped fill in the gaps to get the car set up properly and handling well. I could get the car to be a good 5-lap car but Stash has helped make it a 25 plus lap car. Stash has been the missing puzzle piece for us. Finishing third last Friday night was an incredible feeling. Obviously winning is the best feeling but there’s no better feeling than being able to turn left onto the mini-mile after the race is over to drive to the podium area.” 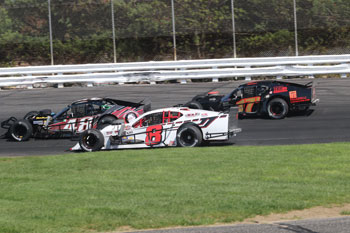 Normally a new driver/crew combination takes a few races for both parties to get to know each other and translate that understanding of one another into success on the race track. But Salva and Butova crewed together over a decade ago which made for a smooth transition and lessened the learning curve.

“We’ve really clicked well right off the bat,” said Salva. “Back 10 or 12 years ago when Bo [Gunning] stopped driving for Ed Partridge and drove one of Frank Ruocco’s cars, I spent the summer working in Frank’s shop with Stash and Steve Butova on Frank’s cars so we had a relationship back then. We had talked over the years and Stash has been able to help me out here and there but now for this year we were finally able to put a deal together for a full season commitment and we’ve worked really well together.” 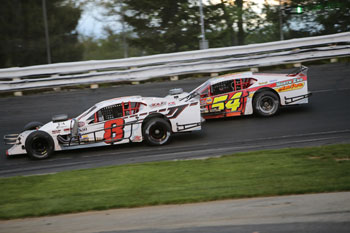 With two finishes of 6th to go along with his podium last Friday and an 8th place finish thus far in 2019, Salva enters the May 31st Military Appreciation Night sitting third in the SK Modified® standings, only 16 points or 8 positions on the track behind leader Michael Gervais, Jr. While Salva’s results look amazing on paper, the 2019 season hasn’t been a 100% smooth ride for Salva and the #8 team and Butova isn’t the only crew member that Salva has to thank for helping him to get to third in the standings.

“The first couple races we ran into some bad luck situations but we were still able to get great finishes with some great recoveries,” said Salva. “The first lap of the Sizzler feature Tom Bolles spun and I got into him and that ripped the shock mounts off of the car. We went a lap down fixing the car but we were able to come back up to finish sixth thanks to Glenn Jensen. He has been my saving grace. Between him, Stash, and my stepfather Tommy Gunning, I think between them, they’ve got about 100 years of experience and they’re the only reasons why I’m still doing this and why we’re having the success that we’ve been having.” 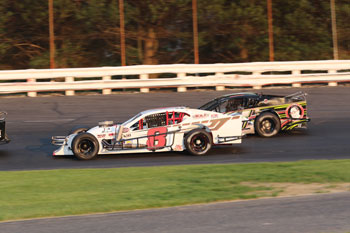 As good as Salva has been this year, he is looking for additional sponsorship in order to be able to coninue the season on a high note.

“We have great partners right now with K & J Automotive, Del’s Vinyl Siding, FK Rod Ends, and T/A Engines but we’re looking for additional support in order to finish out the year on the path that we’re on right now,” said Salva. “When it comes time to get the motor refreshed is going to be crunch time for us. We’re going to run the best we can until we run out of money and then evaluate what our situation is and if we can keep on going or if we need to park the car for a while. Some extra sponsorship would be the ingredient we need for peace of mind knowing that no matter what happens we can have the car back together and at the track for the next week.” 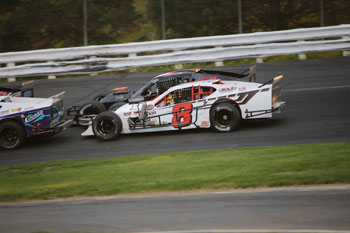 “A win would be unbelievable for us,” said Salva. “I’ve been working tirelessly since I was five years old because all I’ve ever wanted to do was win an SK race at Stafford. It’s been a lifelong goal of mine and we’re knocking on it and getting real close. There’s been a lot of blood, sweat, and money that we’ve put into this car and I think everyone would see me shed a tear or two in victory lane if we do win a race.”

Salva will look to continue to build on his good finishes this season this Friday night, May 31, which is Military Appreciation Night with Fireworks. Tickets for this Friday night’s Military Appreciation Night program are $20.00 for adults, $5.00 for kids 6-14, and as always 5 & under free. Any active or reserve military members can get a general admission ticket at the gates with proper I.D. for only $10.00. Reserved seating is priced at $23.00 for all ages. All tickets include 10% CT Admission Tax. General admission gates open at 5:15pm, with qualifying races beginning at 6:15pm and feature races to follow.