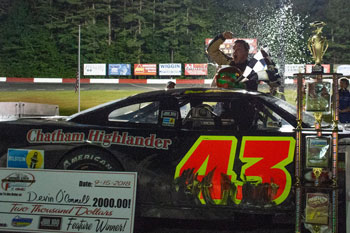 (Stafford Springs, CT)—As Stafford Speedway is preparing for the Call Before You Dig 811 Pro Late Model Open on May 29, Devin O’Connell, driver of the #43 Chatham Highlander Motel Pro Late Model, has his focus on adding to his win list at Stafford. The Madison, CT native got his start in racing in the Monday night Wild Thing Karts series and he won a Legends Car championship at Stafford in 2015. He has since branched out into the Pro and Super Late Model ranks along with the Granite State ProStock Series where he won a championship in 2018. O’Connell is excited about the prospect of racing at his home track.

“Even though I haven’t been racing at Stafford the last couple years, I came up racing in the Wild Thing Karts and Legend Cars, so every Friday night I come straight from work to hang out with my buddies at the track and have a good time watching the races,” said O’Connell. “I feel like Stafford is one of the best run tracks in the entire country, the racing is phenomenal, and I’m really looking forward to being a part of it. I’ve been asking David [Arute] for a long time now about bringing these cars to Stafford. I’m thrilled that the Pro Late Model cars are coming to Stafford and I can’t wait for May 29 to come around. It’s going to be a lot of fun and I finally get to race at a place that I call home.” 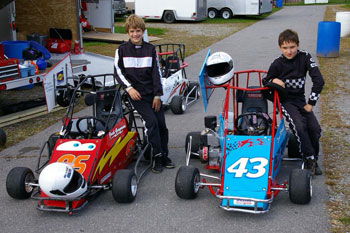 O’Connell racked up a total of 9 wins at Stafford from 2014-2015 racing his Legend Car on the Stafford Mini-Mile and he would like for nothing more than to add his first feature victory on the half-mile layout to his racing resume.

“Once the entry form came out online, I put my number in as soon as I got home from work that day,” said O’Connell. I think this is the only race that I’m officially entered into for the 2020 season so far. With Stafford being my home track this is one of my top priorities this year and I certainly want to go out and see if we can take the win. I’ve got 9 Legend Cars wins at Stafford so it would be really cool to come in and win the Pro LM event. I’m always disappointed when I don’t win, but that’s just my competitive nature. We have a new Port City chassis this year so we’re going to have a few new wrinkles to work out. My father and I are still the same team that came up through the karts and legends and I don’t see any reason why we can’t take the checkered flag.” 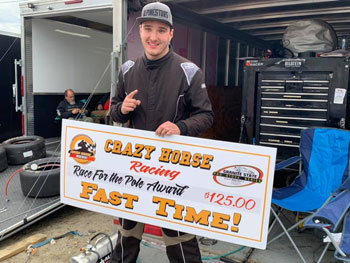 While O’Connell has plenty of experience racing on the Stafford Mini-Mile in the WTK and Legends car series, when it comes to racing the half-mile, he has very little experience.

“I ran a tour modified in a Sizzler practice a couple years ago but that’s all the experience I have on the half mile,” said O’Connell. “Coming to the track every week I would stand up in turns 1 & 2 and listen to the cars come by and try to pick up as much as I could. I know we’re going to have a good car, it’s just a matter of getting the car setup on the money. I have to do my part to figure the track out as quickly as possible. Some of the home track guys like Bryan Narducci and Alex Pearl are in the race and those guys have a little more track knowledge than I do but hopefully things will balance out in the end since I have more experience in these type of cars than those guys do. I think it’s going to be one heck of a show and the race fans are going to be in for one heck of a treat.” 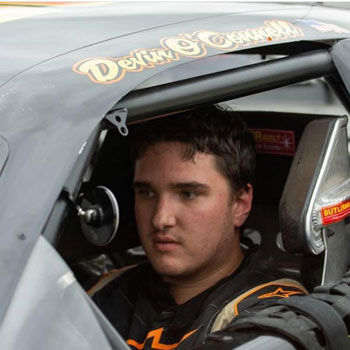 Despite his and most other driver’s relative lack of experience racing at Stafford, O’Connell expects the field of Pro Late Model cars to put on the same type of exciting show that Stafford’s SK Modifieds® deliver each and every Friday night.

“These race cars are fast and I expect to be running lap times close to what the SK’s run even though we only have a 10 inch tire,” said O’Connell. “Everything that a modified car has with tire grip, the Pro LM cars make up with downforce. A perfect example is New Hampshire Motor Speedway. We run within 3 tenths of a second of what the modifieds run and sometimes we can go even quicker. I know that Stafford is modified country and race fans usually look past the taxi cab late model cars, so I hope the fans give us a chance and they can see what these cars can put on for a show. The Pro Late Model drivers, especially the guys from New Hampshire and Maine, race hard and I can’t put a finger on who is going to win, but I hope we’re going to be the winning car.”

O’Connell and the Pro Late Models will take to the track for the CBYD 811 Pro LM Open on Friday, May 29. For more information, visit www.staffordspeedway.com, checkout Stafford Speedway on Facebook or Twitter, or contact the track office at 860-684-2783.