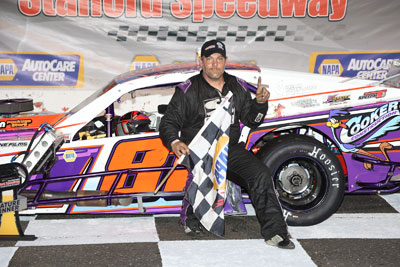 In the 40-lap SK Modified® feature event, Doug Meservey, Jr. took the early lead at the drop of the green with Matt Vassar in second.  Mikey Flynn was third followed by Michael Gervais, Jr. and Chase Dowling.  The caution came out with 4 laps complete as David Arute spun in turn 2 which collected several cars behind him including Bran Narducci, Dylan Kopec, Keith Rocco, Nick Giardina, and Teddy Hodgdon.

Meservey took the lead back under green with Flynn taking second.  Dowling moved up to third with Andrew Molleur taking fourth and Tyler Hines fifth as Vassar fell back to sixth.  Molleur took third from Flynn on lap-8 and Hines followed him forward to take fourth and drop Flynn back to fifth with Meservey and Dowling the lead cars.

Dowling made a move to take the lead from Meservey on lap-13 and that move brought Hines up to second as Meservey fell back to third with Molleur in fourth and Todd Owen fifth.  Hines went by Dowling to take the lead on lap-14 and Dowling almost pulled off a crossover move on lap-15 but he settled back into second behind Hines.  Meservey drifted up the track on lap-17 which allowed Molleur to move into third, Owen fourth, and Michael Christopher, Jr. fifth as Meservey slid back to sixth place.  Meservey’s car then dropped off the pace on lap-19 and he pulled onto pit road.

Stephen Kopcik went by Christopher to move into fifth place on lap-21 with Hines still leading Dowling, Molleur, and Owen.  Owen went by Molleur to move into third on lap-25 and he began to close down the gap to Dowling in second.  Owen caught Dowling on lap-29 and  he made a pass to take second place on lap-30.  Kopcik pulled alongside Dowling for third and the two cars ran side by side for a lap before Kopcik took third on lap-31.  The caution flew with 36 laps complete as Kopec and P.J. Peters spun through the frontstretch grass to set up a 4 lap sprint to the finish.

Hines took the lead on the restart but coming off turn 4 Hines and Kopcik came together with Hines spinning into the infield to bring the caution out before a lap could be completed.  Hines was finished for the evening while Kopcik brought his car to pit road with damage to the right front of his car.  This put Owen in the lead for the restart with Dowling in second.

Dowling took the lead on the restart with a push from Christopher but Owen came back strong to Dowling’s inside on lap-38 to retake the lead.  Dowling was second with Molleur and Christopher side by side for third.  Owen held off Dowling to the line to pick up his first win of the 2021 season.  Christopher got around Molleur for third on the final lap with Vassar rounding out the top-5. 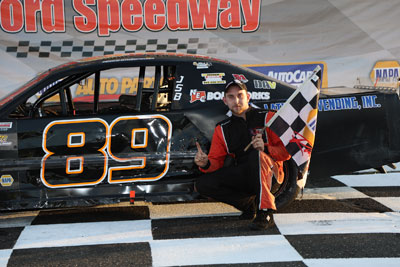 In the 30-lap Late Model feature event, Paul Arute took the early lead at the green flag with Zack Robinson taking second from John Blake on lap-2 but the caution flew before the lap was complete for a spin in turn 1 by Armand Cote, Jr. to put Robinson back in third for the lap-2 restart.

Arute took the lead on the restart with Robinson again going door to door with Blake for second place.  Robinson took the spot on lap-2 just before the caution came back out for a spin in turn 1 by Marc Curtis.

Robinson took the lead from Arute on the restart with Blake briefly making it 3-wide for the lead.  Arute settled into second with Blake third before Rick Lanagan spun in turn 4 to bring the caution back out with 3 laps complete.

Robinson charged into the lead on the restart with Arute taking second.  Blake was third in line followed by Andrew Durand in fourth and the side by side duo of Wayne Coury, Jr. and Keane for fifth.  Coury took fifth on lap-5 with Keane right behind him in sixth.

With 10 laps complete, Robinson had pulled out to a lead of several car lengths over Arute with Durand and Blake side by side for third with Coury in fifth.  Durand took over third from Blake on lap-14 and that move allowed Coury to take fourth, Keane fifth, and Adam Gray sixth as Blake slipped back to seventh in line.  Durand made a move to get by Arute and take over second place on lap-16 while Robinson was still in command.

Coury’s car dropped off the pace on lap-19 and he limped his way back to pit road as Gray and Keane were now side by side for third place with Arute in fifth as Robinson continued to lead.  Gray took third with Keane and Arute falling into line behind him.

Robinson held Durand off to the checkered flag to pick up his first career Late Model win at Stafford.  Gray finished third with Keane and Andrew Molleur rounding out the top-5. 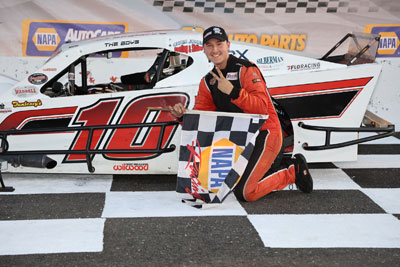 In the 20-lap SK Light feature event, Amanda West and Tyler Barry ran the first lap side by side with West holding the lead by a nose at the line.  Brian Sullivan was third in line followed by Bob Charland and Meghan fuller.  Barry and West ran side by side until lap-4 when Barry got clear into the lead.  Nick Anglace took to the outside lane to get by Fuller and move into fifth place on lap-8 and he then took fourth from Charland on lap-9.  Sullivan was applying heavy pressure to West for second as the race hit the halfway point.  West held onto second and then Anglace streaked by Sullivan in the outside lane on lap-11 to move into third place.  Anglace took to the low line and he took second place from West on lap-13 as Barry continued to hold the lead.  Josh Carey made a move to take fifth from Charland on lap-14 and the caution flag flew with 15 laps complete as Sullivan spun in turn right in front of Charland with several other cars including Steven Chapman and George Bessette, Jr. getting involved as they took evasive action.

Anglace and Barry went wheel to wheel on the restart with Anglace taking lead by a nose at the line.  Derek Debbis was up to third and he took second as Anglace took the elad with Barry falling back to third on lap-19.  Debbis made a move for the lead coming to the checkered flag but Anglace picked up his second win of the 2021 season.  Barry finished third with Charland and West rounding out the top-5. 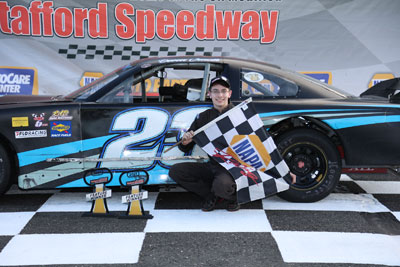 In the 20-lap Limited Late Model feature event, Jay Clement held the lead by a nose at the end of the first lap with R.J. Surdell to his inside.  Surdell charged into lead on lap-2 with Devon Jencik taking second  to drop Jay Clement back to third.  Jeremy Lavoie was up to fourth with Alexandra Fearn and Rich Hammann side by side for fifth place.   Fearn took fifth on lnap-4 while Jencik was slowly starting to pull away from Surdell in second.

Lavoie took over third place from Jay Clement on lap-5 while Jencik was still stretching out his lead.  Lavoie continued his charge towards the front by taking second from Surdell on lap-6 and the caution flew with 6 laps complete for a spin in turn 2 by Gary Patnode.

Back under green Jencik took the lead with Lavoie, Fearn, Surdell, and Mike Hopkins lined up behind him.  Hopkins took fourth from Surdell on lap-10 and Hammann took fifth before Surdell got into the turn 2 wall to bring the caution out with 10 laps complete.

Jencik took the lead back under green with Laovie, Hopkins, Fearn, and Hammann lined up behind him.  The caution and red flags flew with 11 laps complete when Jay Clement and Hammann got sideways coming out of turn 2 and hit the wall head on.

Jencik again took the lead on the restart with Lavoie in second.  Fearn and Hopkins were side by side for third place with Kevin Crosby up to fifth.  Hopkins took third on lap-14 but Fearn came right back to his inside with a crossover move and retook third on lap-15.  The following lap was Hopkins’ turn to get back to the inside of Fearn and he went back into third as Jencik and Lavoie were pulling away from Hopkins and Fearn.

Jencik held Lavoie off over the final laps to score his first career feature win at Stafford.  Hopkins finished third with Fearn and Crosby rounding out the top-5. 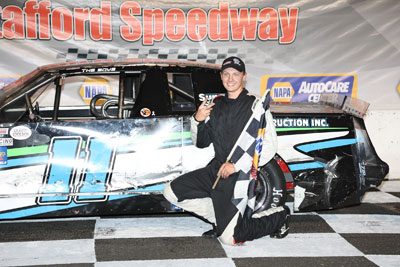 In the 20-lap Street Stock feature event, Jeremy Washburn took the lead at the green but the caution flew with 1 lap complete as Travis Downey spun in turn 1, which collected the cars of Tyler Trott, Bill Cote, Chris Danielczuk, Bobby Stirk, III, and Christopher Orsini.

The race went back to green with Travis Hydar making a 3-wide move to take the lead.  Bert Ouellette came up to second with Adrien Paradis, III moving into third.  Chris Meyer took fourth on lap-3 and Frank L’Etoile, Jr.moved into fifth as Marvin Minkler fell from second back to 8th place.  The caution came back out with 4 laps complete for a spin in turn 1 by John Orsini that collected the car of Nick Bendiak.

Christopher Phelps spun in turn 3 to bring the caution back out right after the restart.  Hydar took the lead on the next restart with Paradis coming up to second.  L’Etoile and Ouellette were side by side for third for a lap before L’Etoile took the spot with Chris Meyer and Nickolas Hovey right behind Ouellette.  Meyer took fourth on lap-8 and Hovey took fifth on lap-9 as Ouellette got dropped back to sixth.  The caution came back out with 9 laps complete for a spin by Jason Finkbein.

Hydar took the lead on the restart with L’Etoile moving up to second.  Hovey took third with Meyer fourth and Paradis falling back to fifth.  Hovey slipped up the track in turn 3 on lap-16 with a flat right front tire, which allowed Meyer to take third, Paradis fourth, and Ouellette fifth.  L’Etoile was applying heavy pressure to Hydar as the two leaders took the white flag.  L’Etoile couldn’t get close enough to Hydar to make a move as Hydar took down his second win of the 2021 season.  Meyer finished third with Paradis and Ouellette rounding out the top-5.