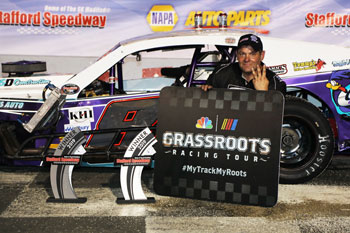 In the 40-lap SK Modified® feature, Michael Christopher, Jr. took the early lead from the pole but Cory DiMatteo pulled to his inside and went to the lead on lap-4. Joey Cipriano came up to second with Christopher third and Keith Rocco in fourth. Rocco’s car shot up the track and into the turn 2 wall to bring the caution out with 9 laps complete.

Cipriano took the lead on the restart but Andrew Molleur was on his inside and the two cars came back to the line side by side. DiMatteo spun in turn 2 to bring the caution back out with 10 laps complete.

Cipriano again took the lead on the restart while Todd Owen took to the outside lane to take second from Molleur. Troy Talman was fourth with Marcello Rufrano and Glen Reen right behind him. Owen was applying heavy pressure to Cipriano for the lead and Owen took the lead by a nose at the line to complete lap-14. Talman and Reen touched wheels with both cars spinning in turn 2 and collecting the cars of Tony Membrino, Jr., Eric Berndt, Kyle James, Tyler Jones, DiMatteo, Tyler Leary, John Catania, David Arute, and Matt Galko to bring the caution out with 14 laps complete.

Owen took the lead on the restart but Cipriano was hanging right with Owen in the outside lane. Molleur nearly made a 3-wide bid for the lead before backing off and settling into a side by side duel with Marcello Rufrano for third. Ronnie Williams was fifth in line with Reen behind him in sixth. At the halfway point of the race, things had settled down into a single file line with Cipriano leading Owen, Molleur, Rufrano, Reen, and Williams. Molleur was looking to the inside of Owen for second but wasn’t able to make a pass stick. Berndt spun in turn 2 to bring the caution back out with 22 laps complete.

Cipriano resumed his place at the front of the field back under green with Owen giving chase from second Molleur was third while Rufrano and Reen were side by side for fourth with Williams in sixth. Owen took the lead by a nose at the line on lap-28 and he cleared Cipriano for the lead on lap-29. Molleur followed him by Cipriano to move into second but Cipriano made a dive bomb move back into turn 3 to try to retake the spot. He touched wheels with Molleur which sent Molleur sideways and he collected Rufrano with both cars heading into the turn 4 wall to bring the caution back out with 29 laps complete. Cipriano was sent to the rear of the field under the caution period, making the order for the restart Owen and Reen on the front row, Williams and DiMatteo in the second row and Michael Gervais, Jr. and Dan Wesson in the third row.

Owen took the lead on the restart with Williams and Reen side by side for second. DiMatteo was fourth with Wesson in fifth. Williams was able to get clear of Reen for second on lap-36 and the fight was now for fourth with Wesson and DiMatteo fighting side by side. Wesson took the spot on lap-39 but out front it was all Owen, who locked down his third win of the 2019 season. Williams finished second with Reen, DiMatteo, and Wesson rounding out the top-5. 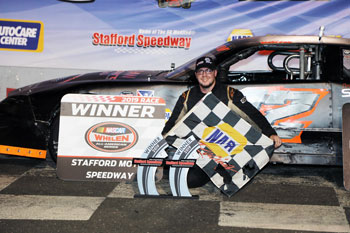 In the 30-lap Late Model feature, a multicar accident involving the cars of Tom Fearn, Tyler Leary, Andy Marchese, Richard Ciriello, and Gary Theriault brought the caution out before the first lap could be completed.

Trace Beyer led the first lap after the restart but Michael Bennett shot into the lead on lap-2. The caution came back out with 2 laps complete as Beyer and Dave Wray came together in turn 1 and crashed into the wall. Ciriello and Kevin Gambacorta were also collected.

The restart saw Al Saunders go three-wide with Bennett in the middle and Michael Wray on the outside in a fight for the lead. The trio ran a lap 3-wide before the caution came back out with 3 laps complete for Greg DeMone, who came to a stop backwards at the exit of turn 4.

Wray took the lead on the restart with Bennett in second. Al Saunders and Bennett were side by side for third with Saunders taking the spot on lap-5. Cliff Saunders and Fearn were now side by side for fourth with Cliff taking the position. Fearn began to slide backwards as Gambacorta took fifth and Fearn now had Paul Arute on his inside in a fight for sixth on lap-7. Arute took the spot and Fearn settled into line behind Arute as Wray was starting to stretch out his lead over Al Saunders. Bennett was still third with Gambacorta taking fourth from Cliff Saunders.

Cliff Saunders came back to the inside of Gambacorta on lap-12 to retake fourth with Arute moving into fifth and dropping Gambacorta back to sixth in line.

With 10 laps to go, Wray was still comfortably in command of the race with Al Saunders giving chase in second. Bennett was third in line with Cliff Saunders fourth and Arute was locked in a tight duel with Gambacorta for fifth.

With 4 laps to go, Al Saunders had eliminated the gap to Wray and he was right on his back bumper for the race lead. Saunders couldn’t get close enough to Wray to make a move as Wray took down his second win of the 2019 season. Bennett finished third with Cliff Saunders and Gambacorta rounding out the top-5. 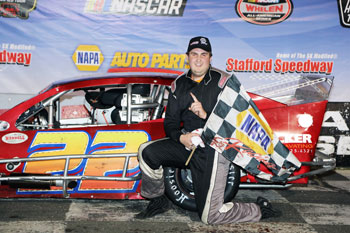 In the 20-lap SK Light feature, Robert Bloxsom, III took the early lead with Jonathan Puleo quickly working his way into second. Sami Anderson was third with Mark Bakaj fourth and Amanda West fifth. Puleo took the lead from Bloxsom on lap-4 while Bakaj was working the outside against Anderson and he was finally able to make a pass on lap-7. The caution came out with 7 laps complete as Anderson spun coming off turn 4 with West also involved.

Puleo took the lead on the restart with Bakaj taking second. Mikey Flynn moved up to third with Bloxsom in fourth and Wesley Prucker and Chris Matthews were side by side for fifth. Just behind Prucker and Matthews was Bryan Narducci.   The caution came back out with 9 laps complete for a spin coming out of turn 4 by Charles McDougall.

Puleo took took the lead back under green with Flynn and Bakaj side by side for second. Bloxsom was fourth with Narducci making a 3-wide move to take fifth. The caution came out with 11 laps complete as Bloxsom and Teddy Hoddgon came together and got into the turn 4 wall. Narducci was sent to the rear of the field under the caution for overaggressive driving.

Puleo took the lead on the restart but Flynn got a good run to his inside on lap-13 and the two cars ran side by side until lap-15 when Flynn got clear to the lead. Prucker was third in line behind Flynn and Puleo with Bakaj fourth and Alexander Pearl in fifth. Narducci was recovered from his penalty and he was sixth in line behind Pearl. The two leaders came to the white flag nose to tail. Puleo got a good run through turns 1+2 and going into turn 3 made a bonsai move to the inside of Flynn. The two cars touched wheels and headed into the turn 3 wall, giving the lead and the race win to Prucker. Bakaj finished second with Pearl, Narducci, and Matthews rounding out the top-5. 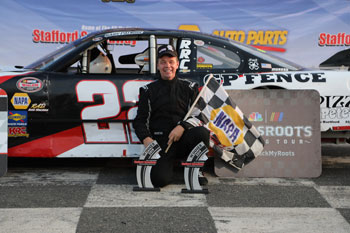 In the 15-lap Limited Late Model feature, David Tefft took the lead from the pole and set the early pace. Duane Provost was second with Gary Patnode third, Alexandra Fearn fourth, and Matt Clement in fifth. Jeremy Lavoie brought the caution flag out with 8 laps complete as his car came to a stop on the backstretch with sparks showering from the rear of his car.

Tefft took the lead on the restart with Patnode pulling alongside Provost for second and then taking second on lap-10. Fearn also got by Provost to take third on lap-10 and Clement took fourth on lap-11 to drop Provost back to fifth in line. Patnode took the lead from Tefft with a pass coming out of turn 4 on lap-11 with Fearn, Clement, and Provost lined up behind the two leaders.

Patnode held Tefft off to the checkered flag to pick up his second win of the 2019 season. Clement finished third with Provost and Kevin Crosby rounding out the top-5. 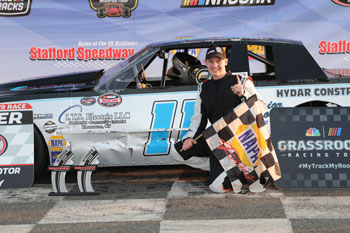 In the 20-lap Street Stock feature, Adrien Paradis, III took the early race lead at the drop of the green flag with Nicole Chambrello quickly taking second. Travis Hydar was third with Dave Secore and Zack Robinson in fourth and fifth.

Chambrello went by Paradis on lap-3 to move into the lead with a pass in turn 3. Robinson got around Secore for fourth place and he was challenging Hydar for third in the outside groove. Secore slid back to eighth as Jason Lafayette took fifth and Meghan Fuller was sixth with Tim Morse in seventh.

Morse took sixth from Fuller on lap-10 with a pass in turn 1 with Chambrello continuing to lead the race with Hydar now behind her in second. Robinson was up to third with Lafayette fourth and Paradis was back to fifth in line. Hydar was applying heavy pressure to Chambrello and he was able to take the lead with a pass coming out of turn 2 on lap-13.

Hydar led the field to the checkered flag to pick up his first win of the 2019 season. Robinson finished second with Chambrello third and Fuller edged out Lafayette for fourth in a duel that lasted the final several laps. 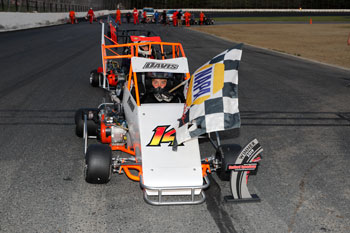 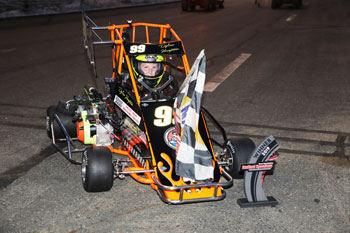 In the 10-lap Wild Thing Karts Tiger A exhibition, Dylan Houghton led the race from start to finish to take the checkered flag. Luke Gegenbach was third with Raleigh Maskell and Adam Bigelow rounding out the top-5. 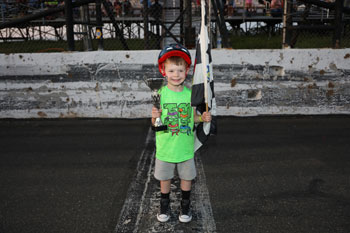 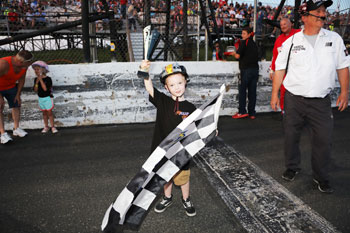