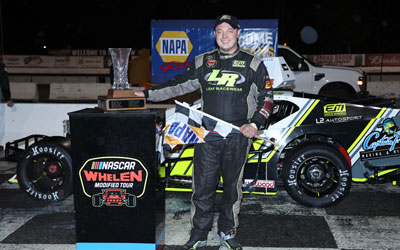 (Stafford Springs, CT)—Stafford Motor Speedway welcomed the NASCAR Whelen Modified Tour to Stafford Speedway for its first of three visits of the 2021 season on Friday, April 30 for the NAPA Auto Parts Spring Sizzler.  Patrick Emerling capitalized on a late race move that saw race leaders Ryan Preece and Ron Silk come together and spin right before rain hit Stafford Motor Speedway to inherit the lead and win the 49th Annual NAPA Spring Sizzler, which was called with 130 of 150 laps complete.

Matt Swanson set the fast time in qualifying and he brought the field to the green flag and took the early lead with Jon McKennedy, Craig Lutz, Doug Coby, and Anthony Nocella making up the top-5.  Chuck Hossfeld’s car came to a stop coming out of turn 4 to bring the caution out on lap-5.

The race went back to green on lap-7 with Swanson taking command.  Lutz took second with Coby, Woody Pitkat, and Nocella making up the top-5 as McKennedy slid all the way back to eighth place behind Timmy Solomito and Eric Goodale.

Swanson was still comfortably in command of the race with 50 laps complete followed by Coby, Lutz, Pitkat, Preece, McKennedy, Rypkema, Justin Bonsignore, Nocella, and Ron Silk.  With the leaders navigating lapped traffic at this stage of the race, Coby took the lead from Swanson on lap-52.  The race action was slowed on lap-62 for a spin on the backstretch by Gary Byington.

The pits opened on lap-66 and Coby led Swanson, Lutz, Pitkat, and Preece down pit road with the remainder of the lead lap cars also coming to pit road.  Coby won the race off pit road followed by Swanson, Bonsignore, Preece, McKennedy, Lutz, Pitkat, Goodale, Ronnie Williams, Nocella, and the remainder of the lead lap cars.  Coby’s quick pit work enabled him to keep the race lead with Swanson to his outside and Bonsignore and Preece lined up in the second row for the restart.

Swanson shot into the lead on the restart with Coby in second and Bonsignore and Preece side by side for third.  Bonsignore took third from Preece and then he took second from Coby just before the caution came back out on lap-72 for an incident in turn 4 involving the cars of Dave Sapienza, Rypkema, and several others who were able to drive away from the accident scene.

Back to green on lap-79 Swanson again took the race lead with Bonsignore right on his bumper in second.  McKennedy was third in line followed by Williams and the side by side duo of Nocella and Pitkat.  Nocella got the better of that duel and took fifth with Silk, Lutz, Andrew Krause, and Kyle Bonsignore making up the remainder of the top-10 behind Pitkat.

Bonsignore and McKennedy swapped second place back and forth between themselves on lap-89 with Swanson continuing to hold the race lead.  Williams was up to third with Justin Bonsignore fourth.  Silk and Nocella were side by side for fifth place with Lutz in sixth.  Positions continued to shuffle as the race was closing in on lap-100 but the action was slowed on lap-96 for a spin in the middle of turns 3+4 by Patrick Emerling.

Swanson took the lead on the lap-102 restart with Silk taking second.  Silk then took the lead from Swanson on lap-103 and his move brought Lutz up to second, Preece to third, Nocella to fourth, and Justin Bonsignore fifth as Swanson slid all the way back to the rar of the field.  The caution came back out on lap-105 for a multicar accident on the backstretch.