(Stafford Springs, CT)—Stafford Speedway returned to NASCAR Whelen All-American Series racing action with the Late Model division taking center stage with their extra distance Call Before You Dig Late Model 50 feature event on Back 2 SKool Blitz Night at Stafford Speedway. Paul Arute wired the field, leading all 50 laps to take down his first feature win of the 2018 season and the $1,811 purse that was boosted up to $1,961 with contingency bonuses from iRacing and New England Racing Fuel, Sunoco. The SK Modified® race came down to a wild finish that saw the top-2 involved in late race incidents that allowed Eric Berndt to emerge with his third win of the 2018 season in a hard fought duel with Michael Christopher, Jr. Teddy Hodgdon became a first time SK Light feature winner after winning Wild Thing Karts and Legend Cars feature events on Stafford’s mini-mile, Justin Bren won the Limited Late Model feature, and Nicole Chambrello won the Street Stock feature.

In the 50-lap Call Before You Dig Late Model feature, Paul Arute took the lead at the green with Al Saunders behind him in second. Tyler Leary took second from Saunders on lap-4 with Darrell Keane in fourth, Michael Wray fifth, and Tom Fearn sixth.

Saunders got back around Leary for second and Keane took third from Leary on lap-9 and he brought Fearn with him to fourth as Leary slid back two spots to fifth. Arute was still leading and Fearn had taken third from Keane when the caution came out with 13 laps complete for Paul Varricchio, Jr. and Glen Reen, who came together and spun in turn 4. 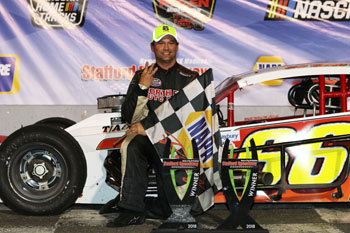 In the 40-lap SK Modified® feature, Michael Gervais, Jr. and Troy Talman brought the field to the green flag and they were still side by side at the completion of lap-3 with Todd Owen and Ronnie Williams side by side behind them for third. Talman got clear to the lead on lap-4 with Gervais and Williams now side by side for second with Owen in fourth and Matt Galko and Joey Cipriano side by side for fifth.

Williams took the lead from Talman with a pass in turn 3 on lap-9. Talman was now side by side with Gervais for second with Gervais taking the place on lap-10. Owen was now on the inside of Talman for third and he took the spot. Michael Christopher, Jr. and Keith Rocco were making their way through the field and they were up to fourth and fifth behind Williams, Gervais, and Owen when the caution flew with 18 laps complete for a spin in turn 4 by Tommy Membrino, Jr.

With 10 laps to go it was Williams, Christopher, Jr., and Rocco out front with Owen and Eric Berndt making up the top-5. Berndt got by Owen to move into fourth on lap-34 with Rocco and Christopher, Jr. still giving chase to Williams for the race lead. Glen Reen came to a stop backwards on the backstretch access road to bring the caution out with 36 laps complete and set up a 4-lap sprint to the finish.

On the restart, David Arute and Gervais touched wheels with Gervais spinning into the turn 2 wall to bring the caution right back out. Williams took the lead on the restart with Rocco and Christopher, Jr. side by side for second, Berndt in fourth and Owen in fifth. Membrino spun in turn 3 to bring the caution back out with 38 laps complete to set up a green white checkered finish.

Williams took the lead on the restart but coming out of turn 2, Rocco and Williams touched with Williams sliding through the grass and falling to the rear of the field. Then Rocco spun on the frontstretch and collected the car of Membrino to bring the caution back out and set up another green white checkered finish with Christopher, Jr. now the race leader with Berndt, Owen, and Josh Wood making up front two rows.

Christopher and Berndt went side by side on the restart and as they came to the white flag, Berndt had the lead by a nose. Berndt cleared Christopher going into turn 1 on the final lap and he led Christopher back to the checkered flag to pick up his third win of the 2018 season. Owen finished third with Galko and Matt Vassar rounding out the top-5. 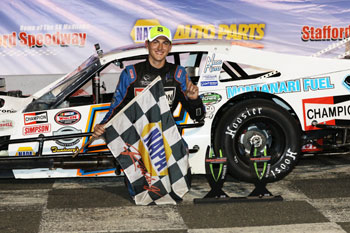 In the 20-lap SK Light feature, Alexander Pearl led the field to the green and he took the early race lead. Wesley Prucker was second with Joey Ferrigno and Teddy Hodgdon side by side for fourth and Marcello Rufrano was quickly up to fifth. The caution came out with 2 laps complete for a spin on the frontstretch by Ed Chicoski.

Pearl took the lead on the restart while the action was intense behind him. Hodgdon and Prucker were dueling side by side for second and Rufrano and Bryan Narducci were side by side for fourth. The caution came back out with 5 laps complete as Rufrano and Narducci came together at the exit of turn 2 and spun, which also collected the cars of Rit Dulac and Chicoski.

Hodgdon took the lead on the restart with Mark Bakaj moving into second. Pearl fell back to third with Prucker and Andrew Molleur side by side for fourth. Molleur won the side by side battle with Prucker and at the front, Bakaj was looking high and low for a way to get around Hodgdon and take over the lead.

Just as Bakaj looked like he was going to take the lead from Hodgdon, Hodgdon began to stretch out his advantage while Molleur was up to third with Pearl fourth and Chris Matthews was up to fifth with three laps to go.

Hodgdon led Bakaj to the checkered flag to pick up his first career SK Light win at Stafford. Molleur finished third with Pearl and Matthews rounding out the top-5. 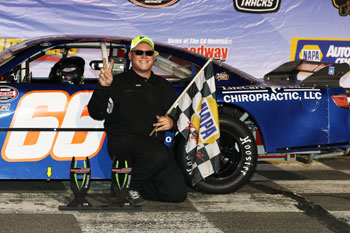 In the 20-lap Limited Late Model feature, Steven Midford took the lead at the green flag with Gary Patnode in second. R.J. Surdell was third but on lap-3 Surdell spun coming out of turn 2 which collected the cars of Alexandra and Ryan Fearn, Jeremy Lavoie, Steve Martel, Andy Marchese, and Duane Provost to bring the yellow and red flags out.

Midford took the lead on the restart with Patnode right behind him in second. Justin Bren was third with Matt Clement fourth and Surdell in fifth. Bren made a move to the inside of Patnode to move into second on lap-6 in turn 2 and when the leaders hit turn 3, Patnode went to the outside of both Bren and Midford to make a 3-wide bid for the lead. Bren emerged with the lead with Patnode in second and Midford in third. Midford spun in the middle of turns 3+4 to bring the caution out with 8 laps complete.

Bren took the lead back under green with Patnode, Clement, Surdell, Midford, and Dan Gorman lined up behind him. Bren was starting to stretch out his lead while Clement was applying heavy pressure to Patnode for second while Surdell was right on Clement’s bumper. Clement couldn’t make a pass on Patnode as Bren took down his second win of the 2018 season. Patnode finished second with Clement, Surdell, and Midford rounding out the top-5. 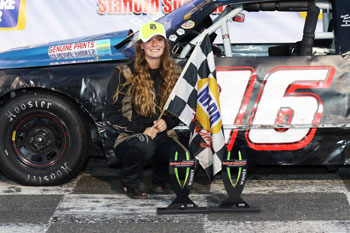 In the 20-lap Street Stock feature, Chuck Harrison shot into the lead at the drop of the green flag with Vince Gambacorta taking second and Nicole Chambrello third. Polesitter Samantha Anderson didn’t get a good start and she slotted into line in fourth with Meghan Fuller in fifth. Behind Fuller it was Brandon Michael and Mike Hopkins side by side for sixth with Tess Beyer in eighth place.

Chambrello got around Gambacorta to move into second with Fuller taking fourth as Anderson began to slide backwards. Tess Beyer took fifth from Anderson on lap-7 and the next lap saw Chambrello overtake Harrison for the race lead.

Fuller was on the charge as she took second from Harrison on lap-11 with Beyer now up to fourth and George Bessette, Jr. was up to fifth with Chambrello comfortably in the lead. Beyer took third from Harrison on lap-12 and Bessette was starting to apply heavy pressure to Harrison for fourth. Bessette took fourth place on lap-14 and now Michael was applying pressure to Harrison for fifth place.

Beyer made a move to the inside of Fuller on lap-16 to move into second as Chambrello continued to lead the race. Bessette was fourth behind the three leaders with Michael in fifth. Fuller came back to the inside of Beyer on lap-19 but she couldn’t make the pass stick. Beyer got into the wall coming out of turn 4 on the white flag lap and she slid back several spots but it was all Chambrello at the front as she scored her second win of the 2018 season. Fuller finished second with Bessette, Michael, and Gambacorta rounding out the top-5.