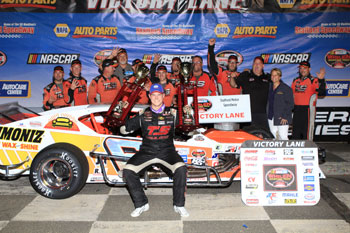 STAFFORD, Conn. — Ryan Preece has been nearly unbeatable of late when he straps behind the wheel of a race car.

Last weekend, Preece scored his first career NASCAR XFINITY Series victory at Iowa Speedway. He marked his return to the NASCAR Whelen Modified Tour Friday at Connecticut’s Stafford Motor Speedway with another trip to Victory Lane in the Stafford 150.

The Berlin, Connecticut, driver took the lead from four-time tour champion Doug Coby on a Lap 148 restart and didn’t look back. The win was the 18th career in Whelen Modified Tour action for Preece and also his seventh at the half-mile Stafford. He won the Spring Sizzler at the track on April 30.

“I would have liked the restarts lane to go more my way, but we had a really good car tonight,” said Preece, who started in the back after having his qualifying lap disallowed for failing post-qualifying technical inspection. “It was tough to have to start in the back, but my car was in the track all day. We’ve just had a great car all year long. I enjoy doing this. I enjoy showing up and knowing what I have and being successful.”

Preece’s No. 6 TS Hauler Chevrolet crossed the the finish line 0.302 seconds ahead of Coby, while Justin Bonsignore followed in third.

Although it looked like Coby was en route to winning for the 11th time at Stafford after leading 135 laps, a few late red flags allowed the rest of the field to close to his back bumper. After a multiple car crash on the frontstretch on lap 144, Preece got his chance at Coby, lining up to his outside on a restart with just two laps remaining. When the green flag flew, Preece used the outside lane and powered around Coby going into turn one. He never looked back.

“I think the biggest thing was I had a better left-rear tire to fire (on the restart),” Preece said. “Having both fresher rear tires helped me be able to get in front of him and have the right line going into turn one.”

Rob Summers was sixth, followed by Dave Sapienza, Craig Lutz, Gary Putnam and Matt Swanson. Rowan Pennink, who held the points lead coming into the event, finished 17th and is seven points behind Solomito. Preece is fifth in points, one behind Eric Goodale and Bonsignore and 26 back of Solomito.

The NASCAR Whelen Modified Tour returns to action on Wednesday night, with the running of the Bud 150 at Thompson Speedway Motorsports Park. From there, the series will visit Bristol Motor Speedway on Wednesday, August 16.