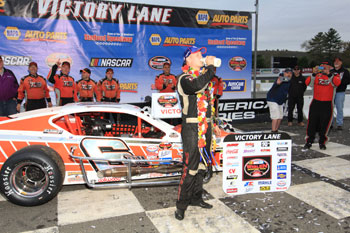 STAFFORD, Conn. — Returning to the NASCAR Whelen Modified Tour full-time this year, Ryan Preece was itching to get back into Victory Lane.

He accomplished that goal Sunday in the 46th running of the NAPA Spring Sizzler at Stafford Motor Speedway.

He took the lead from race leader Doug Coby with 13 laps to go and drove away with his first career Spring Sizzler victory behind the wheel of his No. 6 TS Haulers Chevrolet.

More importantly for Preece, his sixth victory at the Stafford half-mile came in the track’s prestigious spring race. 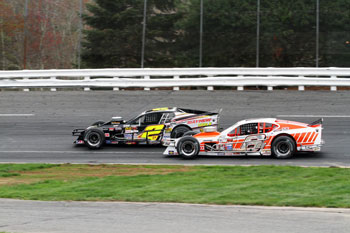 “This means more to me than my first tour win, it was so much hard work,” said an emotional Preece in the press box after the win. “My grandfather has won this race. There are just so many things that come to my head right now. I started racing a modified when I was 12 or 13 years old.”

Preece led 55 laps. Doug Coby, who set the track record en route to his sixth straight Coors Light Pole at the track Saturday, led a race-high 142. But a late caution helped set up Preece’s pass for the lead. While Coby snagged the lead back on the Lap 192 restart, Preece quickly powered back to the front.

Pennink took the championhip points lead by one over Timmy Solomito. Bonsignore is third, 16 behind Pennink and leading a pack of six drivers — including Preece in fifth — separated by just eight points.

The NASCAR Whelen Modified Tour returns to the track at Langley Speedway in Hampton, Virginia, on May 13.