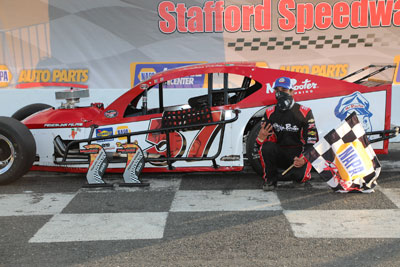 In the 20-lap SK Light feature event, Chris Bagnall, Tyler Chapman, and Bob Charland all came together in turn 1 at the drop of the green flag to bring the caution out before a lap could be completed.  The second start saw Alexander Pearl take the lead with George Bessette, Jr. and Jonathan Puleo side by side for second.  Puleo took second on lap-3 with Nick Anglace taking third as Bessette fell back to a side by side duel with Steven Chapman for fourth.   Bessette won that battle and Brian Sullivan got around Chapman to move into fifth on lap-4.

Bessette continued to charge his way back towards the front with a pass in turn to take third from Anglace on lap-6.  Bessette was still in third but Sullivan was now up to fourth and Anglace was in fifth.  Puleo was starting to look high and low for a way to get around Pearl on lap-13 but Pearl was able to keep Puleo behind him.  Puleo was just starting to line up a pass on Pearl for the lead when the caution came out with 15 laps complete for a spin in turn 2 by Tyler Chapman.

Puleo and Pearl went side by side for the lead on the restart.  Pearl got loose in turn 4 and he slid back to third with Bessette moving up to second behind Puleo.  Derek Debbis was up to fourth and Sullivan was running in fifth with Steven Chapman right on his back bumper in sixth.

Bessette and Puleo touched wheels coming off turn 4 to the checkered flag with Puleo getting to the line first to take the victory.  Debbis finished third with Pearl and Sullivan rounding out the top-5. 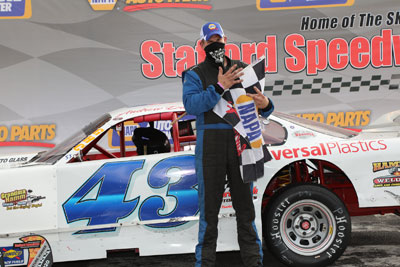 In the 20-lap Limited Late Model feature event, Alexandra Fearn and Andrew Durand went side by side for the lead right from the drop of the green flag with Matt Clement in third, Lucas Leone fourth and R.J. Surdell in fifth.  Durand cleared Fearn for the lead on lap-3 and Clement pulled alongside Fearn in a fight for second but Fearn was able to hold him off and maintain second.  Leone was black flagged and he came to pit road on lap-5, done for the race.

Durand had stretched out his lead over Fearn but Fearn was slowly reeling Durand back in and at the halfway point of the race, there was less than a car length between the two leaders.  Clement was still third with Surdell fourth and Jeremy Lavoie fifth.  Lavoie took to the outside lane to get around Palardy on lap-12 to move into fourth and drop Palardy back to fifth.  Fearn was still giving chase to Durand at the front of the field with Clement holding down third place.

Fearn stayed within a car length of Durand but she couldn’t get any closer to make a bid for the lead as Durand took the checkered flag.  Clement finished third with Surdell and Gary Patnode rounding out the top-5. 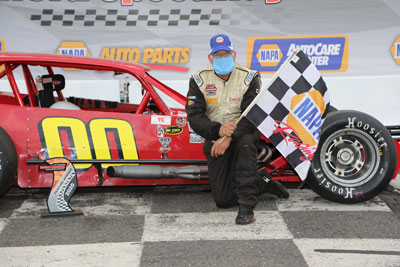 In the 15-lap Vintage All-Stars feature event, Scott Anderson took the lead at the green flag with Gary Byington and Wade Gagner side by side for second.  Gene McClain was fourth in line with Bobby Gegetskas in fifth.  Gagner quickly got clear from Byington and took second on lap-2.  The caution flew with 4 laps complete for a spin on the backstretch by Skip Swaintek.

Anderson took the lead back under green with Gagner in second.  Byington held off a strong challenge from McClain to maintain third with Gegetskas still in fifth place.  Gregg Massini got around Gegetskas to take over fifth and with 5 laps to go the order was still Anderson out front followed by Gagner, Byington, McClain, and Massini.

Anderson cruised to the checkered flag, leading all 15 laps to pick up the Vingtage Modifieds victory.  Gagner finished second with Byington, McClain, and Massini rounding out the top-5.  Skip Swaintek was the Vintage Sportsman winner.