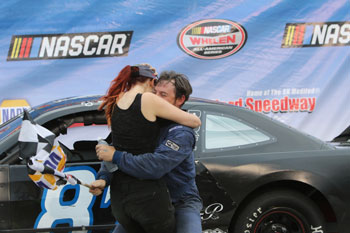 “Through all the hardships we’ve gone through the last couple of years at the track, to finally get a win at Stafford, it was a check off of the bucket list,” explained Surdell.  “Not everyone can say they’ve won a race at Stafford, it was incredible and awesome to get to victory lane. We’ve had a rough start to this year with 3 DNF’s in the first 6 races, so it was rough and we were down a little, but this win gives the team and my family a whole lot of confidence.  Now my son can stop making fun of me because he’s won more trophies than I have.” 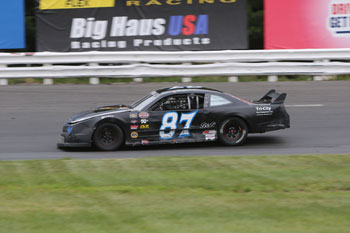 Though Surdell did not begin his Stafford Speedway racing career until the 2014 season, R.J. has been a regular in the Stafford Speedway paddock since the 2003 season as a crew member on multiple teams.  After crewing for over 10 years, Surdell caught the racing bug and decided it was time to go racing.

“I started coming to Stafford back in 2003 working with Jeff Malave on his SK cars and then we did Touring cars for a couple of years,” said Surdell. “After that, I worked with J.J. Hill on his Late Model with Rob Russell and that was when I decided to finally build something myself and go racing. My wife Megan and I are both good friends with Joey Ferrigno and he had a Limited that he was looking to store somewhere while he was racing his SK Light.  The car needed a lot of work and he basically said if I could fix it up, I could race it.  We eventually bought the car from Joey but it was a pile of scrap to start out with.  We had to put a front and rear clip on the car, so it took me two years to put the car together.  We started out with the center section and then put the front and rear clip on and hit the track once it was done, which was in the middle of the 2014 season.  My son Damien decided that he wanted to race while I was working on the car so we put him in a Wild Thing Kart before I actually got on the track.  He started the same time I did and he has about 6 more races than I do.” 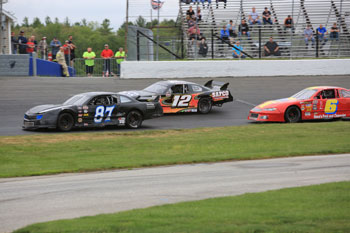 Surdell and the #87 team have struggled through their first 3 plus seasons in the Stafford Limited Late Model division. Yet the family run operation of R.J., his wife Megan, and their son Damian, have continued to work on the car with their sights set on getting to NAPA Auto Parts victory lane.

“We’ve put a lot of hard work into the car and we’ve put good equipment in to make sure that everything is done right,” explained Surdell.  “We struggled for a while just getting through stuff that was wrong with the car and then we were getting caught up in other people’s stuff on the track.  We worked through that and it was perseverance that enabled us to get this win.  It’s just myself, my wife, and my son that work on the car and it’s not easy.  A lot of people think it’s easy to just put a car together and go out and win races but it’s definitely not easy.  It takes a lot of work and dedication.  We’ve spent hours and hours on the car going through every nut and bolt.  Especially my wife Megan, who is also my crew chief, she goes through the setup and she’s the one who makes the car turn, I’m just the guy who gets to sit behind the wheel every Friday night.” 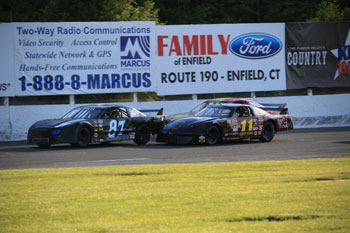 “I really have to thank Joey Ferrigno for giving me the shot to put the car together and getting it on the track in the first place,” continued Surdell.  “Without him it would have taken me a lot longer to get a car together and go racing.  Also Rob Russell from RRC, he’s treated me very well and it’s been a big help working with those guys on their cars and most importantly my wife Megan.  Without her stepping up in the middle of last season, I don’t think we’d even be a contender for a top-3 finish.  She does a lot of hard work with the setup on the car and I have to thank my son for giving me some good advice after he won some of his kart races.  He was the Tiger B champion last year and now he’s hoping for a win in the big Friday night show in the Junior Outlaws.”

Surdell is excited to get back to the track for another shot at getting to NAPA Auto Parts victory lane and will make his attempt this Friday July 14 which is Girls Night Out and the NAPA Intrepid Fallen Heroes Fund Track Walk with Fireworks. Ladies General Admission Tickets are just $10 all other Adult General Admission Tickets are $17.50. As always kids age 6-14 are just $5.00 and kids 5 & under are free. Reserved seating is available and is priced at $20.00 for all ages. All ticket prices include 10% CT Admission Tax. Stafford Motor Speedway offers plenty of free parking for auto racing events along with overnight parking available for self-contained Recreational Vehicles.

The track walk will take place at the conclusion of the qualifying heat races before the main event features and fans can take part by making a $10 donation to the Intrepid Fallen Heroes Fund at the NAPA booth that will be set up at the main ticket entrance. The NAPA booth will also have several raffle prizes available.