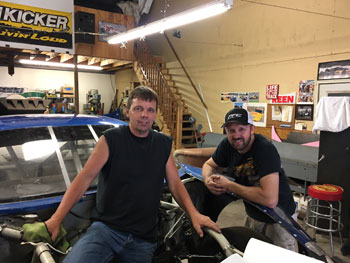 (Stafford Springs, CT)—From the grandstands as a race fan to a sponsor and then behind the wheel as a driver. Some might call it fiction or a dream, but for Barkhamsted, CT native Gary Patnode, it’s reality. Patnode recently purchased the #66 Limited Late Model from Justin Bren and registered the car as #22 for the 2017 Limited Late Model season at Stafford Speedway. Just how Patnode went from spectator to sponsor to about to be a driver is a truly unique story.

Patnode participated in the Rusty Wallace Racing Experience at Stafford in 2016 and it was there that he met SK Modified® and Late Model competitor Glen Reen. The two quickly developed a friendship during that drive and it was that meeting that led to Patnode and his GP Fence business to become a sponsor of Reen’s SK Modified®. Fast forward to 2017 and Patnode and GP Fence have returned as a sponsor of Reen’s #17 SK Modified® machine and the Patnode/Reen connection led to Patnode purchasing Bren’s #66 Limited Late Model. 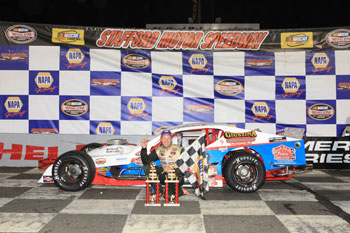 “I met Glen through the Rusty Wallace Driving Experience at Stafford,” said Patnode. “After it was over, we got to talking and he told me to watch for him in the #17 SK Modified® on Friday nights. We exchanged numbers and I went to the track to watch him race and he wasn’t out there, so I texted him asking where he was. He told me about how he had blown the engine in the car and he had everything put back together and was ready to go, but he didn’t have any money to buy tires. So I asked him if I bought him tires, would he race? I grew up around motocross and if someone had done something like that for me, it would have meant the world to me. So I sent him a check for some tires and not only did he win the Late Model feature that night, he won the SK Modified® feature as well. That win wouldn’t have happened if I hadn’t sent him the money for some tires. Glen put a GP Fence logo on the roof of the #17 and we started coming to the track to watch him race. We’re back on Glen’s car this year on the rear quarter panel and I started thinking that I might want to give racing a try myself. With Glen’s connection to Rob Russell through the #31 Late Model, he was able to put me in touch with Justin Bren, whose car is a Rob Russell chassis, and we bought the car from Justin. Glen also introduced me to Don Wood from R.A.D. Automachine for an engine and here we are now with the #22 car.”

As Patnode prepares to make his on track debut in the #22, he faces an immense learning curve. Patnode’s only previous experience is limited to the Rusty Wallace Racing Experience at Stafford and Loudon, NH, but he is excited about his prospects and thinks he can be a front runner after learning the ropes of the Limited Late Model division. One area of expertise that Patnode will be able to rely on is the assistance of the Rob Russell owned #31 Late Model team for some car setup ideas and guidance. 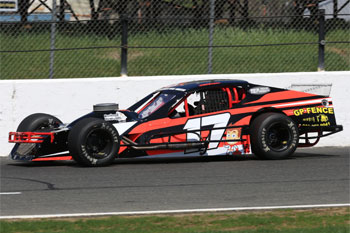 “My experience comes down to basically around 150 laps in the Rusty Wallace Racing Experience, so I’m as green as it gets,” said Patnode. “The plan for this year is to listen to everything that Glen tells me. I have a fantastic car, a fantastic motor, and the Rob Russell crew guys from the #31 Late Model are going to help me set the car up. The plan at first is to start in the back and learn how to handle the car and how to pass cars rather than have cars behind me pushing me. The last thing I want to do is upset anybody so I’ll hang at the back and see what happens. At the same time, I’m not looking to just go out on the track and run around, I want to be competitive. So I want to win and run up front, but I’d be happy if we could eventually get into the top-3 or the top-5. I might run well and I might go out there and have the crap scared out of me. But my expectations are high and I think I can have more than one good finish this season. I’ve learned more in the last week than I thought I could learn in a month. Glen has been a really big help for me as have the guys from the 31 Late Model. Justin (Bren) said he would be available and Don Wood said if I ever need anything to just text him and he would be there. Everyone has been so eager to help me out, I feel like I’m in a great situation.”

Heading into the June 23rd feature event, Jeremy Lavoie leads the points in the Limited Late Model division by only 2 points or one position on the track over Duane Provost, the defending track champion in the Ltd. Late Model division and winner of the last 2 feature events. Bryan Narducci sits third, 14 points behind, with 2015 Ltd. Late Model champion Al Saunders tied with Robert Bloxsom, III for fourth in the standings.