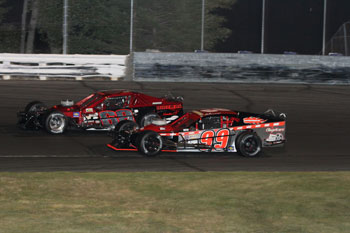 (Stafford Springs, CT)—Throughout his racing career, Holbrook, MA native Richard Savary has won modified races at tracks all across the Northeast; Thompson, Lee, Star, Monadnock, but one track that is missing from his victory list is Stafford. Savary will be looking to add to his career win list this Friday night and park his #99 Alloy Wheel Repair Chevrolet in NAPA Victory Lane when the Valenti Modified Racing Series makes its first of two visits during the 2018 season to Stafford.

“A win at Stafford would be awesome and it would be really big for me,” said Savary. “I’ve been fortunate to win modified races during my career at all the surrounding tracks but Stafford. I don’t have many years left in racing so a Stafford win would be a big deal for me to be able to say I’ve won a modified race there.”

Savary has shown speed at Stafford in his previous VMRS starts. Savary has started 13 of the 19 VMRS races held at Stafford since 2010 and has 3 top-5 and 7 top-10 finishes in those starts. While his finishing record might not show it, he is always among the contenders at Stafford and he feels confident about his chances of adding a Stafford victory to his resume despite not having the home track knowledge that some of his fellow competitors enjoy.

“I feel good, we have a good, competitive car, and last couple years we’ve been real close to winning at Stafford, it just hasn’t happened yet for us,” said Savary. “We were pretty close last year but we ran out of gas running in the top-3 so hopefully this can be our year.” 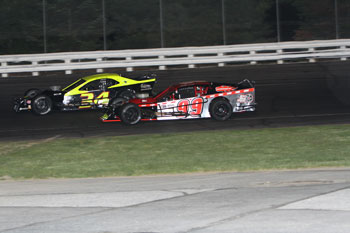 One thing that Savary will have to overcome in order to check Stafford off of his career win list is the home track knowledge that drivers like Jeff Malave, Rowan Pennink, Woody Pitkat, and Keith Rcoco hold from running weekly in the SK Modified® division.

“Every time I talk to someone about Stafford, the biggest thing is overcoming the home track advantage some of the guys like Keith Rocco, Rowan Pennink, and Woody Pitkat have,” said Savary. “The weekly guys have a huge advantage at Stafford. I’ve raced enough times at Stafford over the years to know the groove but where the weekly guys have an advantage is knowing how the track will react to different weather on a certain night. Back when I ran weekly at Thompson or Seekonk, I had that advantage. Guys would always ask me why I was so good at those tracks and I told them it was from racing there weekly. In addition to the home track knowledge, they’re all good drivers with really good equipment. If we can run with those guys and stay towards the front, it’s all about being there at the end of the race.”

Savary will be going into the VMRS 80 with a game plan of patience and trying to keep enough of his #99 machine underneath him for the final laps of the race. Savary and the VMRS teams will have to make one set of tires last for a 10-lap heat race, potentially a 12-lap consi if they don’t qualify through their heat race, and then the 80-lap race itself. 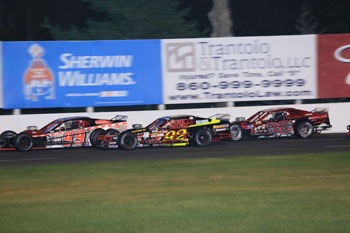 “If I get a good draw for the heat, I’ll try to stay up front because that will give you a good starting position for the feature,” said Savary. “If we have a bad draw, you take what you can get because you can still get to the front even if you start in 15th or 16th. 80 laps is plenty of time and if the guys up front are going too fast, you let them go and wait for a caution. We have a different tire for this year so we’ll see if they last a little longer. Stafford is a track where once the tires start to fall off, they fall off a lot. Stafford is a handling track. You need horsepower with the long straightaways, but it’s all about handling. You have to make sure that you have the car under you for the end of the race.”

If Savary can’t put a Stafford notch into his career win column in the VMRS 80, he has his eyes set on the June 8 Open Modified 80 for another chance.

“We’re planning on running at least the open mod race in June,” said Savary. “We have a printout of the rules and our car fits the criteria and that will give me one more opportunity to win a race at Stafford. I’m in my mid-50’s and if this is my last year racing, I want to have as many opportunities to win at Stafford as possible.”

The Valenti Modified Racing Series will take to the track this Friday, May 18 with qualifying beginning at 6:30pm. Stafford’s five NASCAR Whelen All-American Series divisions will also be in action. Tickets for this event are priced at $30.00 for adult general admission tickets, $5.00 for children ages 6-14, and children ages 5 and under are admitted free of charge when accompanied by an adult. Reserved seat tickets are $32.00 for all ages. All ticket prices include 10% CT Admission Tax. Stafford Motor Speedway offers plenty of free parking along with overnight parking available for self contained Recreational Vehicles.