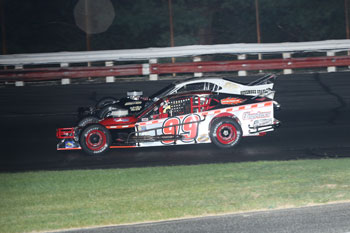 (Stafford Springs, CT)—After years of trying to win a modified race at Stafford Speedway, Richard Savary finally broke into the win column last August in the Lincoln Tech VMRS 80. The Canton, MA native and driver of the #99 Pioneer Valley Wheel Repair Chevrolet is now looking forward to the Twisted Tea Open Mod 80 set for this Friday, June 14 at the Connecticut half-mile and adding a second win to his Stafford resume.

“Every race you go to you go with the attitude that you’re going to win the race,” said Savary. “Now that we’ve actually won a race at Stafford, it gives us confidence that we can do it again. It’s going to be tough to beat the Stafford regulars. Everyone saw how tough the regular guys were in the Open 80 in May. Another win would be great and it would show that we can back up our first win and that it wasn’t a fluke. Grabbing the win and taking home the 80 Twisted Tea’s would be a great way for us to start the weekend off.” 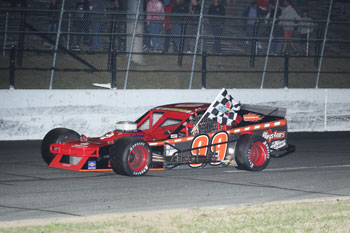 Savary and the #99 team have shown great speed over the past 2 seasons at Stafford as Savary recorded top-10 finishes in all 4 of his Stafford starts last season and he has top-10 finishes in 6 of his last 8 Stafford starts dating back to the 2017 season. The Twisted Tea Open 80 will mark the debut of a new engine combination for Savary at Stafford and he is eager to see how he will stack up against the competition.

“We have an aluminum head engine now rather than the steel head motor we’ve been running so that will be a little different but other than that it’s the same car we had at Stafford last year,” said Savary. “We won’t know where we’re at with the car until we get on the track Friday. The two rounds of practice that we get are going to be important for us to get a good feel for the car, see where we are compared to other cars, and what adjustments that we might need to make to get the car better.” 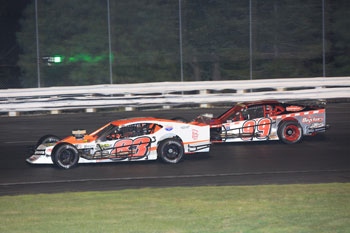 In order for Savary to collect a second Stafford victory, he knows he will face stiff competition from Stafford’s regulars from the SK Modified® and SK Light ranks who will be pulling double duty this Friday night. The Open Mod 80 run in May was dominated by Stafford regulars with 7 of the top-10 positions occupied by drivers who are either current or former regulars in the SK Modified® and SK Light divisions.

“The guys who run every week have experience racing in the spring, summer, and fall and they know how the track changes,” said Savary. “You can see how much better those guys get when they run in a Tour type race or a Tour race just because they know what to expect changing from day to night. It’s definitely an advantage knowing that. We’ve had a fast enough car to win at Stafford several times before but with me not having the weekly knowledge that some of the regulars have, our car could be fast during the day but not as quick at night. I’ve told some of the regulars in the past that they probably would’ve won races if they were driving my car rather than me driving it.” 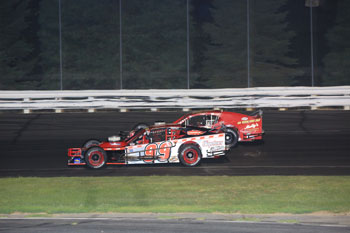 One area where things can get spiced up is the pit stop to change two tires during the Twisted Tea Open 80. Savary is used to either changing one tire in Tri-Track events or not changing tires at all during a Modified Racing Series event. Savary is looking forward to the variety of options that are presented to teams with the opportunity to change two tires during the race.

“The two tires will definitely add something to the show,” said Savary. “Normally with the Tri-Track series we get one tire change and you know everyone is going to change the right rear so the fact that we can change 2 tires, you don’t know if guys are going to go with 2 right side tires or 2 rear tires. Depending on what your car needs, that could make a big difference in the second half of the race when everyone starts racing for the win. It doesn’t matter who is fast at the beginning of the race, it’s all going to come down to the race after everyone makes a pit stop.”

Stafford’s five NASCAR Whelen All-American Series divisions will join the Open Modifieds in feature action on June 14. Tickets for the Twisted Tea Open Mod 80 are $30.00 for adults, $5.00 for kids 6-14, and as always 5 & under free. Reserved seating is priced at $32.00 for all ages. All tickets include 10% CT Admission Tax. General admission gates open at 5:15pm, with qualifying races beginning at 6:15pm and feature races to follow. Open Modified teams can still register for the June 14 Twisted Tea Open 80 as well as the July 12 Bud Light Open 80 by contacting the speedway office or completing the online form found in the TEAMS section of www.staffordspeedway.com.