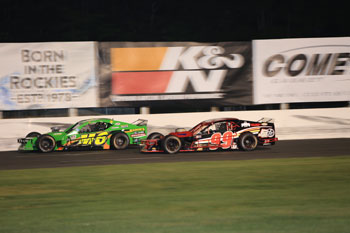 (Stafford Springs, CT)—History has shown that when the Valenti Modified Racing Series rolls into Stafford Speedway, the odds of winning are not in your favor if you’re coming in as an outsider. In the 17 VMRS races that have been run at Stafford since 2010, 70% have been won by Stafford weekly competitors. Richard Savary, driver of the #99 Alloy Wheel Repair Chevrolet, will be looking to score a victory for the outsiders this Friday night in the VMRS 80.

“We have a good car and we’ve had a good car at Stafford in the past,” said Savary. “Of all the tracks that we run at, I think that Stafford is one of the toughest tracks to compete against the regulars like Rowan Pennink, Ted Christopher, Keith Rocco, and Woody Pitkat. They’ve all raced there weekly for many years and it seems like one of them always wins the race. We’ve been able to get close to them and race with them, but we just haven’t been able to win a race yet. We’re hoping to change that Friday night. It’s a huge advantage for those guys racing at Stafford. The car has been good enough to win in the past, it just needed a driver that understands the track a little better than I do behind the wheel. We have the same amount of speed in the car as those guys do, it’s just being able to set up passes in the best spots and those guys also race each other a little differently. One of the biggest things for us success-wise was having Joey Kourafas coming on board as the crew chief. He’s helped us out tremendously with his knowledge.”

Perhaps one of the main reasons why Stafford regulars have found so much success in the VMRS races is they have a better idea of how to save their tires over the 80-lap feature distance. VMRS competitors must qualify and race on the same set of tires and tire management is always a key factor in the outcome of the races. 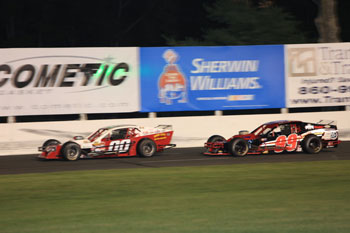 “You just have to stay patient at the start and not get caught up in racing too many guys,” said Savary. “Whoever has the best tires left at the end is probably going to win the race. I think one of the regular guys could win the race just by knowing what lines to run around the track. Whenever someone new comes into the division they’re super fast and they think they’re flying and then they realize that isn’t the hot setup. It’s just something you have to figure out and work with. I’ve been doing it long enough that I have a feel for what the car needs to do and guys like Jon McKennedy are good at it. You have the spotters telling you the lap times you need to run so there’s a lot of trust with the spotter and you don’t want to let guys around you dictate how fast you go, you have to go at your own pace.”

It’s possible that a driver could make a pit stop and swap their tires around to make a run at the end of the race. VMRS rules don’t allow new tires to be put on the car, but drivers can swap left and right side tires. In order for this to be a successful strategy, the caution flags have to fall just right for drivers to be able to take advantage of a tire swap situation. 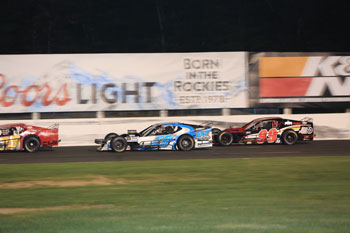 “Someone could definitely pit and come back to win,” said Savary. “The caution flags would have to fall right but it could definitely happen. I remember Tommy Barrett coming from the back a few years ago after pitting so it can definitely be done. Sometimes there aren’t a lot of cautions at Stafford because everyone is being patient so it might not work in that situation. If your car isn’t right you might come in and make a change but if you’re up front, I don’t think you’d give up the track position. The new thing that guys seem to be doing is swapping the left side tires around, so you might see that.”

The Valenti Modified Racing Series will take to the track with qualifying beginning at 6:15pm. Stafford’s five NASCAR Whelen All-American Series divisions will also be in action. Tickets for this event are on sale now and are priced at $30.00 for adult general admission tickets, $5.00 for children ages 6-14, and children ages 5 and under are admitted free of charge when accompanied by an adult. Reserved seat tickets are $32.00 for all ages. All ticket prices include 10% CT Admission Tax. Stafford Motor Speedway offers plenty of free parking along with overnight parking available for self contained Recreational Vehicles.