(Stafford Springs, CT)—Stafford Speedway returned to NASCAR Whelen All-American Series racing action with the Back 2 SKool Blitz Night at Stafford Speedway. It was a banner night for the Rocco and Fearn families as Keith Rocco won the 40-lap SK Modified feature and his son KJ won one of the 2 Kids Big Wheel races that were held as part of Kids Night and Tom Fearn and Alexandra Fearn were the winners of the Late Model and Limited Late Model features. Bryan Narducci won the SK Light feature and George Bessette, Jr. won the Street Stock feature. Joey Introvigne was the winner of the second Kids Big Wheel race and Ryan Midford was the winner of the 5-lap Wild Thing Karts Tiger Cubs exhibition race. 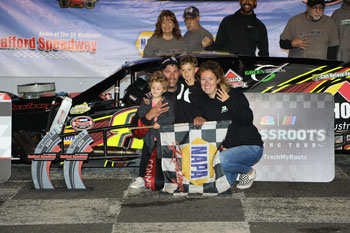 In the 40-lap SK Modified® feature, Troy Talman took the lead at the green with Tyler Leary and Tony Membrino, Jr. side by side for second. Membrino took second on lap-3 with Todd Owen moving into third. Michael Gervais, Jr. was up to fourth and Michael Christopher, Jr. was up to fifth as Leary was sliding backwards. Marcello Rufrano spun in turn 3 to bring the caution out with 5 laps complete.

Rocco was applying heavy pressure to Owen for the lead and he was able to take the lead on lap-13. Rocco’s move opened the door for Christopher to follow him through and drop Owen back to third in line. Talman and Membrino were now side by side for fourth place with Gervais in sixth.

Christopher was looking high and low for a way to get around Rocco but at the halfway point of the race it was Rocco that was still in command. Owen was still third with Gervais fourth and Stephen Kopcik fifth. Rob Goulet brought the caution out with 22 laps complete with a spin in turn 4.

Christopher and Rocco were side by side for the lead on the restart with Owen, Kopcik, and Gervais lined up behind them. The two leaders ran side by side until lap-25 when Rocco cleared Christopher. With 10 laps to go, Rocco was still in the lead with Christopher giving chase. Owen was third with Kopcik and Gervais behind him. Ronnie Williams took sixth from Glen Reen on lap-32.

Rocco led Christopher to the checkered flag to pick up his fourth win of the 2019 season. Owen finished third with Gervais and Kopcik rounding out the top-5. 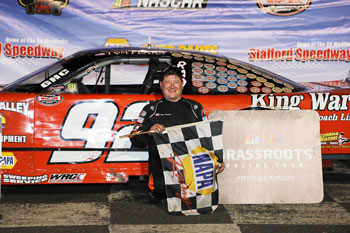 In the 30-lap Late Model feature, Tyler Leary streaked into the lead at the drop of the green flag with Michael Wray taking second. Michael Bennett was third with polesitter Richard Ciriello falling back to fourth. Cliff Saunders was fifth in line but he lost that position to Tom Fearn on lap-4. Fearn took fourth from Ciriello on lap-5 and he began to set his sights on Bennett for third place. The caution came out with 6 laps complete for a spin in turn 2 by Andy Marchese.

Wray took the lead on the restart with Bennett taking second. Tom Fearn was up to third with Leary fourth and Al Saunders up to fifth. Fearn pulled alongside Bennett for second on lap-9 and he was able to complete the pass on lap-10. Just as Fearn completed the pass on Bennett, Leary followed him through to take third and drop Bennett from second back to fourth.

With 10 laps to go, Wray was still in the lead with Tom Fearn inching closer and closer lap by lap in second. Leary was still third with Bennett, Al Saunders, and Kevin Gambacorta behind him. Tom Fearn got a good run to the inside of Wray and he was able to take over the race lead on lap-24.

Tom Fearn led Wray to the checkered flag to pick up his eighth win of the 2019 season. Leary finished third with Al Saunders and Bennett rounding out the top-5. 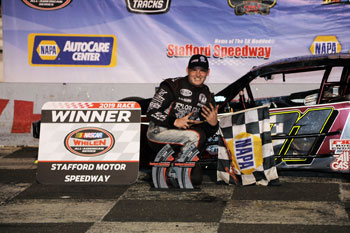 In the 20-lap SK Light feature, Chris Bagnall and Glenn Bartkowski came together right at the start to bring the caution out. Joey Ferrigno took the lead with Chris Matthews taking second on the restart. Wesley Prucker was thid with Alexander Pearl fourth and Sami Anderson fifth. Bryan Narducci took fifth from Anderson on lap-2 and the order shifted on lap-4 as Pearl went to second and Narducci took third with Matthews and Prucker side by side for fourth with Ferrigno still leading the way. Narducci took second from Pearl on lap-7 just before the caution came out for a spin in turn 3 by Mikey Flynn with Norm Sears coming to a stop against the wall in the middle of turns 3+4.

Pearl shot into the lead on the restart with Prucker taking second. Steven Chapman was up to third while Narducci was fourth and Ferrigno was fifth. Chapman moved into second on lap-10 with Narducci and Prucker now side by side for third as Pearl continued to hold the lead. Bob Charland got around Ferrigno to move into fifth and Teddy Hodgdon was right behind him in sixth as Ferrigno slid back to seventh. The caution came out with 13 laps complete for a spin in turn 1 by Alina Bryden.

Pearl took the lead with Chapman, Narducci, Prucker, and Hodgdon lined up behind him on the restart. A multicar crash in turn 2 involving Noah Korner, Robert Bloxsom, III, and Glenn Griswold brought the caution back out with 13 laps complete.

Narducci took the lead from Pearl on the restart with Chapman in third before the caution came back out one lap later for a spin in turn 4 by Nick Anglace.

Narducci took the lead on the next restart with Chapman taking second. Pearl held off a challenge from Hodgdon to maintain third with Prucker in fifth. Pearl got loose on lap-18, which allowed Hodgdon to pull alongside him for third. Chapman was right on Narducci’s back bumper as they took the white flag. Chapman couldn’t make a move on the final lap as Narducci took down his second consecutive and seventh overall win of the 2019 season. Hodgdon finished third with Pearl and Prucker rounding out the top-5. 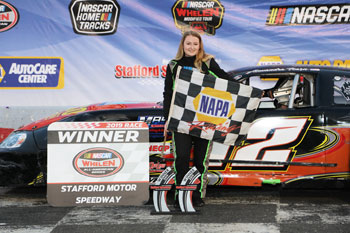 In the 15-lap Limited Late Model feature, points leader Matt Clement pulled off the track with a flat tire on the first lap and Devon Jencik was also an early retirement. Alexandra Fearn took the lead at the drop of the green flag with Gary Patnode, Duane Provost, and Jeremy Lavoie lined up behind her. Dave Gargaro, Jr. was fifth in line with Kevin Crosby in sixth.

With 5 laps to go, Fearn still held the lead with Patnode, Provost, and Lavoie lined up right behind her. Patnode was able to get a run to the inside of Fearn coming off turn 4 on lap-11 but Fearn was able to fend off his challenge. Provost then made a move to the inside of Patnode on lap-12 to move into second and his move brought Lavoie up to third as Patnode slide back to fourth in line.

Fearn held Provost off to the checkered flag to pick up her second consecutive and fourth overall win of the 2019 season. Lavoie finished third with Patnode and Gargaro rounding out the top-5. 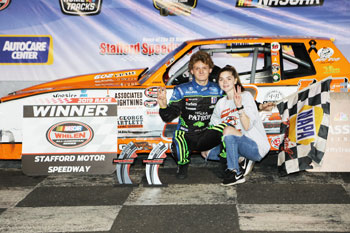 In the 20-lap Street Stock feature, Adrien Paradis, III took the lead from polesitter Marvin Minkler on the first lap but he would lose the lead to Travis Hydar on lap-2. Zack Robinson was second in line with George Bessette, Jr. third and Meghan Fuller fourth with Paradis sliding back to fifth when the cautoin came out with 3 laps complete for a spin in the middle of turns 3 & 4 by Jason Futoma.

Hydar took the lead back under green with Robinson taking second. Robinson fell back to fourth as Bessette took second and Fuller came up to third on lap-6 with Tyler Trott up to fifth. At the halfway point of the race, Hydar had started to pull away from Bessette and Fuller while Nicole Chambrello was applying heavy pressure to Trott for fifth.

Chambrello took fifth from Trott on lap-12 and Trott then brought the caution out with a spin coming out of turn 2 with 13 laps complete.

Hydar took the lead on the restart with Fuller pulling alongside Bessette for second. Fuller got clear to second on lap-15 and her move allowed Robinson to pull alongside Bessette for third with Chambrello in fifth. Robinson spun coming off turn 4 to bring the caution out with 18 laps complete and set up a green white checkered finish.

Hydar charged into the lead on the restart but Bessette got a great run through turns 1+2 and took the lead heading down the backstretch. Fuller got by Hydar on the last lap but Hydar came back to the inside of Fuller in turns 3+4. The two cars touched and they got into the wall, allowing Dave Secore to finish second behind Bessette and Paradis came up to third. Chambrello finished fourth with Trott rounding out the top-5. 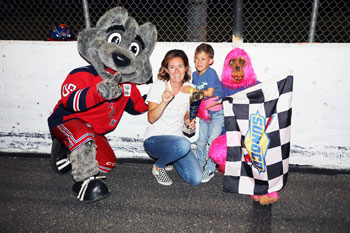 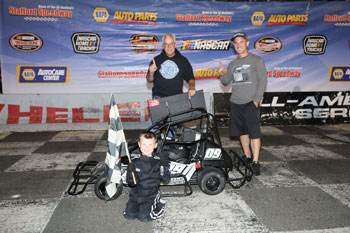