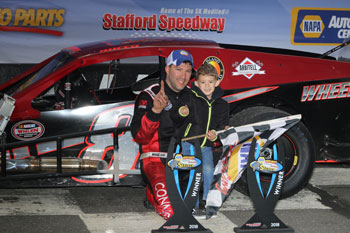 In the 40-lap SK Modified® feature, Keith Rocco took the lead at the green with Michael Christopher, Jr., Eric Berndt, and Glen Reen briefly going 3-wide before Christopher took second with Berndt to his outside and Reen on his back bumper in fourth. Ronnie Williams was fifth behind Reen. Berndt slid back several spots to sixth as Reen moved into third, Williams into fourth, and Rowan Pennink took over fifth on lap-3. The caution came out with 5 laps complete for Troy Talman and Stephen Kopcik with Kopcik spinning on the frontstretch after a flat right rear tire.

Rocco took the lead back under green with Reen providing heavy pressure to his back bumper for the lead. Pennink was up to third behind Reen and he was also looking for the lead. But the caution came out with 6 laps complete for spins in turn 3 by Tyler Jones, John Catania, and Tony Membrino, Jr.

Rocco and Reen resumed their duel for the lead on the restart with Pennink in third but the field was only able to complete one more lap before the caution came back out for Membrino, who came to a stop against the turn 2 wall.

Rocco took the lead on the restart with Reen slotting into second just in front of Pennink but the caution came back out with 8 laps complete for spins by Matt Vassar and Jones.

Rocco took the lead back under green with Reen again able to slot himself into second. Pennink was third but Christopher, Jr. took the spot on lap-9 with Jeff Baral up to fifth behind Pennink. Joey Cipriano was sixth with Williams, Todd Owen, Cory DiMatteo, and Tyler Hines making up the top-10. Reen was applying heavy pressure to Rocco for the lead while Pennink was looking high and low for a way around Christopher. Pennink’s car dropped off the pace on lap-14 and the caution came out with 14 laps complete as he limped back to pit road. Pennink would rejoin the race after making the pit stop.

The caution came out on the restart for a spin in turn 1 by David Arute with the car of Vassar put to the rear for contact. Rocco took the lead on the next restart with Christopher, Jr. pulling alongside and then taking second from Reen. Christopher, Jr. made a move for the lead in turn 3 on lap-15 and touched tires with Rocco, but everyone was able to keep going with Rocco keeping the lead and Reen getting around Christopher, Jr. for second. Baral was up to fourth with Williams in fifth. The order was the same when the caution flew with 26 laps complete for a spin on the backstretch by Owen.

Rocco took the lead on the restart while Reen got loose in turn 2 which allowed Christopher, Jr. to charge into second. Kopcik was recovered from his early race flat tire and he took third with Williams fourth and Reen falling back to fifth. Cipriano was sixth with Michael Gervais, Jr. seventh, Arute eighth, Berndt ninth and Chase Dowling tenth. The caution came back out with 33 laps complete as Kopcik got into the backstretch wall after something on his car broke and then spun in turn 3 with a flat tire which also collected Arute and Berndt.

The restart saw Christopher, Jr. get a great jump and he surged into the lead, but behind him Robert Palmer almost got into the turn 1 wall which brought the caution out before a melee erupted in turn 3 that involved Baral, Owen, and several other cars. This put Rocco back out front for the restart with Christopher, Jr. to his outside and Williams and Reen in the second row.

The restart saw another caution come out for a spin on the backstretch by Joey Cipriano that collected Tom Bolles. Rocco took the lead on the next restart with Williams taking second. Christopher, Jr. was third with Reen fourth and Gervais in fifth. The caution came back out with 37 laps complete for a spin in turn 3 by Dowling and Josh Wood.

Following post race inspection, the cars of Michael Christohper, Jr. and Glen Reen were found to be 11 and 5 pounds underweight respectively and they were each penalized one position per pound underweight, dropping Reen to 9th and Christopher, Jr. to 13th. The new top-5 is Rocco, Williams, Galko, Gervais, and Tyler Hines. 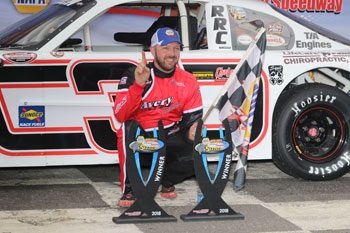 In the 30-lap Late Model feature, Michael Bennett and Tom Fearn were side by side for the lead at the drop of the green but the caution came out before a caution could be completed as a 3-wide situation in turn 4 saw Paul Arute and Kevin Gambacorta spin with Michael Wray taking also involved.

The field completed one lap before the caution flew for a spin in turn 3 by Kyle Casagrande. Bennett and Fearn came together on the frontstretch with Bennett’s race finished while Fearn was able to continue. This put Darrell Keane and Mike Quintiliano on the front row for the restart.

Keane took the lead on the restart while Glen Reen drifted up the track in turn 2 and fell back to eighth in the running order. Quintiliano was second behind Keane with Chase Cook in third. Cook would lose the spot to Wayne Coury, Jr. with Tyler Leary making up the top-5. The caution flew with 6 laps complete for a spin in turn 2 between Coury and Cook.

Keane took the lead back under green but the caution came back out for spins in turn 3 by Arute and Al Saunders. Keane took the lead again on the restart with Quintiliano in second. Leary was up to third with Gambacorta back up to fourth and Mike Mordino was fifth. Coury took fifth from Mordino on lap-9 and Mordino then spun into the turn 3 wall after contact with Reen to bring the caution back out. Reen was sent to the rear of the field for the contact.

The restart saw Larry Vassar spin on the frontstretch to bring the yellow right back out. Keane took the lead on the next restart with Gambacorta moving into second. Gambacorta would then fall back to sixth place as Leary moved into second, Coury third, Fearn fourth, and Arute fifth.

Fearn made a move for third to get by Coury on lap-13 as Keane continued to lead the race. A 3-wide move in turn 3 saw Arute, Gambacorta, and Cook go around in turn 3 in synchronized spin with Wray and Quintiliano also involved to bring the caution out with 14 laps complete.

Keane took the lead again on the restart with Fearn, Reen, Leary, and Casagrande lined up behind him. Cook had damage to his car and he was black flagged on lap-17. The caution came out one lap later for a spin by Casagrande in turn 1 that saw Shawn Thibeault get parked for the remainder of the event for making contact with Casagrande.

Keane took the lead back under green with Reen taking second from Fearn. Fearn was third with Leary in fourth and Quintiliano in fifth. Fearn took a look under Reen for second, but Reen was able to fend off his challenge on lap-22.

With 5 laps to go, Reen and Fearn were right behind Keane in a 3 car fight for the lead with Quintiliano closing in on the lead trio. Keane drifted up the track in turn 2 on lap-29, which allowed Reen and Fearn to both get by and drop Keane back to third. Reen led Fearn to the checkered flag to win get his championship defense off to the best possible start. Quintiliano got by Keane on the last lap to take third with Coury rounding out the top-5. 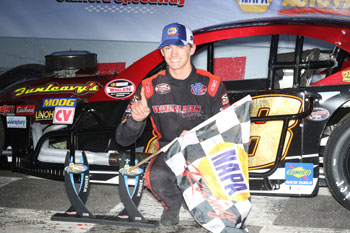 In the 20-lap SK Light feature, Andrew Molleur streaked into the lead at the green, going around polesitter Geoff Nooney. Todd Douillard also got by Nooney to take second with Nooney, Mark Bakaj, and Brett Gonyaw making up the top-5.

With 4 laps complete, Molleur was out front with Douillard and Nooney side by side for second and Bakaj and Gonyaw side by side for fourth. Molleur was comfortable out front while Douillard settled into second with Gonyaw, Marcello Rufrano, Bakaj, and Bryan Narducci lined up in a single file line behind him as they hit the halfway point of the race. Narducci was on a charge after starting deep in the field and he took third from Douillard on lap-12 with Rufrano just ahead of him in second and Molleur continuing to lead the race. Narducci then took second from Rufrano on lap 13 before the caution came out with 13 laps complete as Ed Chicoski and Rit Dulac spun through the frontstretch grass.

Molleur took the lead on the restart but by tth time the cars hit turn 4, Rufrano had taken the lead from Molleur with Narducci in third, Gonyaw fourth, and Bakaj fifth. Narducci got around Molleur for second but he couldn’t catch Rufrano before the checkered flag as Rufrano started the SK Light season off with a win. Molleur finished third with Gonyaw and Bakaj rounding out the top-5.