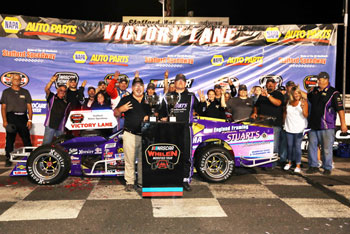 Doug Coby dominated the Stafford 150 at Stafford Motor Speedway, leading the first 147 laps before a caution flew for the first time. After a chaotic overtime restart, Ron Silk was the beneficiary of some fresh tires and a daring three-wide move to the take the lead, and the win.

The former series champion earned his second consecutive NASCAR Whelen Modified Tour checkered flag — which was also his 13th career and second at the Connecticut half-mile. 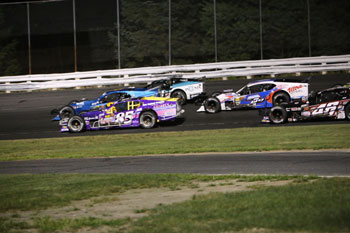 “We are just continuously putting ourselves up towards the front, in position to have things happen like what happened tonight,” Silk said. “A lot of times, you make your own luck. My team has improved dramatically and the guys are doing a great job.”

It was Doug Coby’s night before a crash in turn three suddenly changed the complexion of the race. Coby was fastest in practice, earned his sixth Mayhew Tools Dominator Pole Award in qualifying, and drove away with the race early. It was looking like Coby was going to celebrate a complete sweep of the night and his 13th career Stafford win.

But the caution changed everything.

With only six cars on the lead lap, pit strategy was key in the finishing order. Teams are only allowed to take one tire per pit stop under caution, but most of them made their way down pit road more times than one during the yellow. Coby’s Mayhew Tools team elected to take three tires, but he was also down pit road another time for fuel only. After four stops, he restarted sixth for the final dash.

Matt Swanson and Justin Bonsignore took the green flag on the front row, but it wasn’t long before Silk took the top spot with a daring three-wide move off turn two. From there, it wasn’t quite clear sailing, as Jon McKennedy was on the back bumper looking to pounce. But Silk was able to hang on for his third Whelen Modified Tour win of the season.

“I knew there were only six of us on the lead lap at that point and I thought you had to take the tires,” Silk said of the mindset during the yellow. “There were 146 green flag laps, our tires were shot.”

After restarting sixth, Coby managed to charge back to a third-place finish, while Swanson was fourth, and Craig Lutz fifth.

Coby leads by 24 over Silk in the championship point standings, while defending series title holder Bonsignore is third, 42 back.

The NASCAR Whelen Modified Tour returns to the track on Wednesday, August 14, at Thompson Speedway Motorsports Park for the Bud ‘King of Beers’ 150.