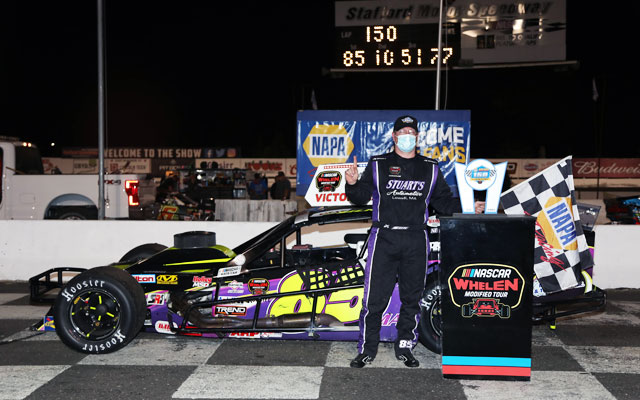 (Stafford Springs, CT)—Stafford Motor Speedway welcomed the NASCAR Whelen Modified Tour to Stafford Speedway for its lone visit of the 2020 season on Friday, September 26 for the NAPA Auto Parts 150.  Ronnie Silk came into the race as one of the hottest NWMT drivers with 3 consecutive podium finishes and he continued his hot streak by winning the NAPA Auto Parts 150 for his second win of the 2020 season and his 4th career NWMT win at Stafford.

Silk enjoyed a dominating day at Stafford that began with his #85 car being the fastest car in practice to claim the number 1 pit stall for the NAPA Auto Parts 150.  Silk qualified second behind polesitter Eric Goodale and he led the first 50 laps of the NAPA 150 before coming to pit road for his first of 2 pit stops during the race.

After Silk’s second pit stop of the race on lap-102, he restarted in 7th place and he moved up to second by the time the caution came back out on lap-117 for spins by Eric Goodale and Matt Galko spun on the backstretch.

Silk powered his way around race leader Chase Dowling on the ensuing lap-124 restart to retake the lead and he slowly pulled away from the field to lead the final 26 laps and take the checkered flag.  Doug Coby finished second with NWMT points leader Justin Bonsignore rounding out the podium finishers. 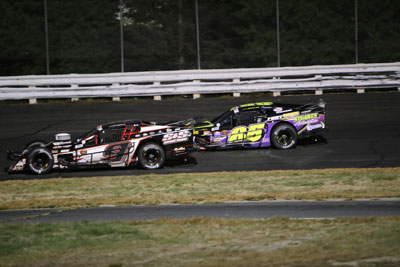 “We had a great car,” said Silk.  “I think we all struggled a little bit in practice but I knew speed-wise we had a good car and right from the green flag I knew we had a car that could contend and I knew if I could get out front I could hold them off.  Fantastic effort by all my guys.  It’s been a good week for me, I got engaged on Tuesday so this is a great way to cap off the week.  I knew Chase [Dowling] gets around here really good and he gets around everywhere really well and it’s fun racing with him.  Luckily I was able to get a good run on him coming off turn 2 and finished the pass through 3 and 4.  I could see him in the mirror for a little while, he tried to stay with me but the gap was getting bigger and bigger so I was just kind of cruising at the end in case we had a late caution.”

“I bet you didn’t expect to see us here after the first 80 laps,” said Coby said.  “I kept going, kept plugging away, kept seeing what we wanted and we ended up second. I’m really happy.  We had a fast car at the end and that’s really when you want to be fast.  We’ve got something to build on for the winter and hopefully come back with a little bit better package next year.”

“We had a really good car right from the start but I don’t know if we had as good of a car as the 85 [Silk],” said Bonsignore.  “The car came alive kind of a little too little too late and maybe a late caution could have bunched us up.  We got another top-5 but it wasn’t looking good there with about 30 or 40 to to.  It’s great to be back at Stafford and it’s great to have fans here and we’re looking forward to coming back in the Spring.”