Ronnie Williams Closing in on SK Modified® Championship at Stafford

(Stafford Springs, CT)—When the SK Modified® division takes the green flag this Friday night, September 14, for their 40-lap feature, Ronnie Williams will be looking to put the finishing touches on his first career SK Modified® track championship. Williams and the #50 Les’s Auto Center team enter the race with an 86 point lead over his closest championship pursuer Keith Rocco, meaning that all he needs to clinch the championship is to finish 18th or better. Despite being so close to the championship, Williams is refusing to look any further ahead than the race at hand.

“It’s exciting to be in this position, but I’m not taking anything for granted,” said Williams. “Until we lock it up, I’m not even thinking about the championship. There’s still two races to go and a lot of things can happen. We need to have a good, solid final 2 weeks and then we can celebrate and talk about it as much as we want. You really can’t focus on the standings. One race can change everything. I remember last year I was in the points lead for one race and then all of a sudden things changed. As much as you like to look at it, it’s pointless because everything can change in the blink of an eye.” 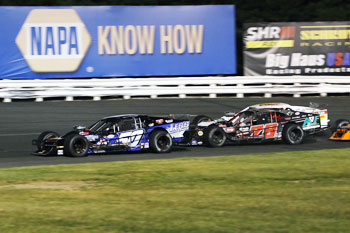 The 2018 SK Modified® season kicked off with defending track champion Keith Rocco winning the first four races of the year and looking like he was well on his way to a second consecutive championship. But Williams and the #50 team remained consistently fast all season while Rocco struggled through the month of July and the beginning of August. Williams and the #50 team took over the points lead from Rocco following the July 6 feature event and they have held the top spot ever since.

“The beginning of the year didn’t worry us at all,” said Williams. “It was still early in the season and we finished second a couple of times. We had an early wreck and we were like 5th or 6th in points but not for one second were we worried about making that deficit up. We still had a lot of things we could do to make the car better and all the guys on the team have done an unbelievable job. We’re definitely looking forward to the final 2 races and hopefully we can get 2 more wins. Going into this year I had one goal and Adam [Skowyra] and his guys all had one goal and that was to get a jacket for being the track champion. I think the key for us was showing up to the track every week and everyone having the same goal in mind. Everyone knows what they need to do and everyone wants to win every Friday night and if we can’t win then get the best finish possible.”

With the 2018 SK Modified® championship ever so close to being in his grasp, Williams says that he and the #50 team won’t change their approach at all to the final 2 races of the season. 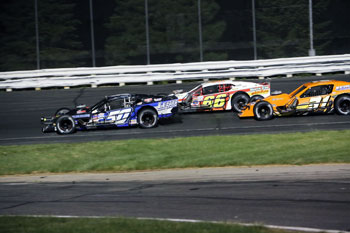 “We’ve all been talking about it and we basically said we need to keep on doing what we’ve been doing every week,” said Williams. “It’s got us this far and got us the point lead so we’re going to show up with the mindset just like we did at the start of the season where there’s no points involved. We should be in good shape if we do what we do on the track. Whatever issues may come up, I know I have the best crew out there and for the last 2 races we’re going to try to keep on doing what we’ve been doing all year long.”

Tickets for this Friday night’s First Responder Friday / Final Friday Night Shoot-Out program are priced at $18.50 for adult general admission, $5.00 for children ages 6-14, and children ages 5 and under are admitted free of charge when accompanied by an adult. All First Responders with proper I.D. can get a general admission ticket for only $10. Reserved seat tickets are $20.00 for all ages. All ticket prices include 10% CT Admission Tax. Stafford Motor Speedway offers plenty of free parking along with overnight parking available for self contained Recreational Vehicles.

The 46th Annual NAPA Fall Final Weekend will close out the 2018 season on the weekend of September 29-30. Tickets may be purchased by calling the speedway office. Discount tickets are available through participating NAPA stores.