(Stafford Springs, CT)—Over the past few weeks, there are few modified drivers anywhere in the Northeast that can match the hot streak that Stafford SK Modified® driver Ronnie Williams has been on. Williams finished third in the SK Modified® feature at Stafford on June 21 and then went on a 3-race winning streak with a VMRS win at Loudon, NH on June 23, a Tri-Track win at Seekonk, MA on June 26 driving Gary Casella’s #25 car, and a win in the NAPA SK 5K on June 28 driving his familiar #50 Les’s Auto Center car. Williams followed up his big week with a second place finish after a tense back and forth battle in the closing laps of the July 5 SK Modified® feature with Keith Rocco. Williams will be looking to continue his hot streak this Friday at Stafford as he will pull double duty with the #50 team, driving the SK Modified® feature as well as the Bud Light Open 80 feature. 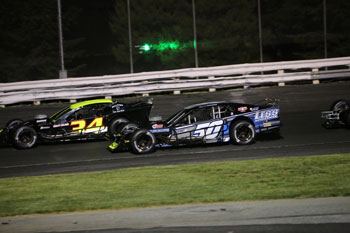 “It’s only one week and we won 3 races but it’s the first time I’ve won races in different cars at different tracks,” said Williams. “In 2015 when we won 6 races in our family owned car, we won 4 out of 5 races and that was cool to do but at that time I wasn’t doing any Tour racing, VMRS, or Tri-Track shows, it was all SK’s at Stafford. It was pretty cool to be able to go from Loudon, which is the biggest track we race on, to the smallest track that we race at with Seekonk and win and then win the biggest show of the year for the SK’s with the NAPA SK 5K. We hope we can keep this going.”

Williams has driven in the first two Open Mod 80 shows at Stafford this season with finishes of 12th in May and 8th in June. Although those weren’t the finishes that Williams and the #50 team were hoping for, Williams feels confident that his #50 Open Modified car will be just at stout as his #50 SK Modified® car for the Bud Light Open 80. 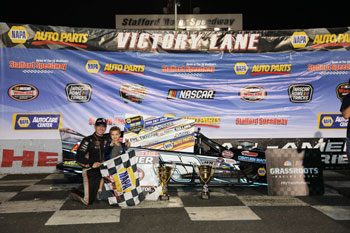 “Any time you come to the track you want to win, that’s what we’re all here for,” said Williams. “The first open show, we just missed it, Adam [Skowyra] and all the guys went back and did their homework on the car and they brought a great race car for the second show. We went a lap down early in the race for a loose gas cap but we were able to recover from that and had a very fast car that night but something happened at the end of the race and we got taken out in a wreck. We had real good drive off the corner, we could roll the center very well, and our pit stop was unbelievable. I think we came in the pits in 5th and we were one of the first ones off pit road so to beat a lot of the top Tour teams off pit road was pretty cool for us to do. Once the June race was over I was already looking forward to the Bud Light 80. This is probably going to be our last race this season with the open car but I’m real excited to race the car again and we’re hoping we can make the race a good one.”

Williams will also be looking to continue his hot streak with his SK Modified® car. Williams heads into the July 12 feature and TC 13 Shoot Out with 3 consecutive podium finishes that have helped him climb from 6th in the points standings to 4th over the last three weeks.

“The first race that matters is the 40-lapper,” said Williams. “That’s the race that pays the points and you have to finish in the top-13 in order to get into the TC 13 race. A lot of people have said that we’re having an off year, but I’ve always thought we were fine. We haven’t been getting the finishes we wanted but I was talking with my spotter Jerry the other day and we’re not worried one bit. We have a strong car and we’ve had a strong car the last couple weeks. This is usually when we get pretty good in the summer months and we would love to be able to go back to back with championships.”

Williams qualified for last season’s Inaugural TC 13 Shoot-Out with a second place finish in the 40-lap race and he finished the TC 13 Shoot Out in 7th after starting 12th following an invert of the top-13 cars. This year’s edition of the TC 13 Shoot Out will see the number of cars inverted determined by a chip draw that will be drawn by Ted Christopher’s niece Nicole following the completion of the 40-lap SK Modified® feature. The chip draw will leave the number of cars to invert up to chance and Williams acknowledges that although it will be tough to win the race starting in the back, that’s where he wants to be. 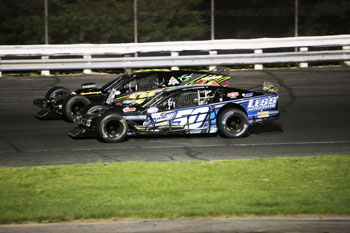 “First of all, I hope I’m the guy who wins the 40-lap race and where you start in the TC 13 Shoot Out can make all the difference,” said Williams. “The race is only 13 laps long, which is just a little longer than a heat race, and I don’t think there will be any cautions in that race. Most guys have trouble going from 8th to the front in a heat race, but to be able to win a race that honors the memory of Teddy would be pretty cool to do.”

The TC 13 SK Modified® Shootout will once again be paired with the Bud Light Open Modified 80, the 3rd Open Modified event of the 2019 season. Stafford’s Late Models, SK Lights, Limited Late Models, and Street Stocks will also all be in action. Tickets for the Bud Light Open Modified 80 / TC 13 SK Shootout are priced at $30.00 for adult general admission, $5.00 for children ages 6-14, and children ages 5 and under are admitted free of charge when accompanied by an adult. Reserved seat tickets are $32.00 for all ages. All ticket prices include 10% CT Admission Tax. Stafford Motor Speedway offers plenty of free parking along with overnight camping available for self-contained Recreational Vehicles.