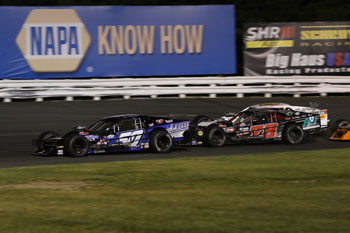 (Stafford Springs, CT)—For Stafford Speedway SK Modified® driver Ronnie Williams and the #50 Empower Financial Advisory / Les’s Auto Center team, the 2019 season will kick off with the duo holding the distinction of being the defending champions. While Williams admits it will be a different feeling when coming to the track this season, he is ready to get back to racing and contending for another championship.

“I would say it’s going to be a little different feeling this year,” said Williams. “We had a lot going on last year and I remember saying in the preseason that if I didn’t do well in the #50 car, then something was wrong with me as the driver. To win the NAPA SK 5k, win 4 races, and clinch the championship before the Fall Final, that was a huge accomplishment for all of us and it showed that I made the right move coming to the #50 team. Going into this year I think everyone on the team is a little more confident and I’d say that we’re going for the championship again and even more wins. I know the car will be good with how much effort all the guys put in at the shop during the week so it all comes down to me as the driver and having a little luck on our side to miss any accidents on the track. If we can finish all 40 laps every Friday night and be consistent, the car is pretty darn good every week and we shouldn’t have any problems. Big thanks to all our sponsors Empower Financial, Les’s Auto Center, All Town Sanitation & Recycling, Centurn Machine, Palmer Paving, NAPA of Tolland, and Flamingo Motorsports and everyone who works so hard on this team: Dave, Mark, Craig, Paul, Andrew, Les, John, Cory, Kodey, Jack, Tim, Ron, Justin, and Matt.” 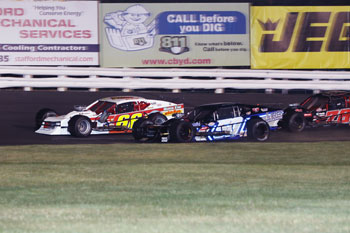 Although Keith Rocco looked like he was going to be the driver to beat with 4 wins in a row to begin last season, Williams and the #50 team showed no ill effects of being a new driver/team combination as they recorded 4 podium finishes in the first 6 races before getting their first win together in their 7th start.

“I have a good relationship with Adam and all the guys on the team and I think we all clicked pretty quickly last season,” said Williams. “We started the season off with a bunch of second place runs and although it took a while to get our first win, once we got that first one, we started clicking them off. I don’t think we ever got too worried at the beginning of the year. We were having really strong runs except for the third race of the season where we had a bad night. With 22 races on the schedule, we knew that Keith was going to eventually have a bad race and we just needed to keep pace with him. We never strayed from our game plan. The only night where I was really worried was May 25th. We ended up in the consi and we almost destroyed the car in the consi and Adam [crew chief Skowyra] was pretty worried since we finished fourth in the consi. He asked me how the car was and I told him it was good and he looked at me like I was crazy but we ended up finishing the race second behind Rowan Pennink, so the car was pretty good that night. I think at that point of the season we were still learning each other a little and now we look back at that night and we laugh about it.” 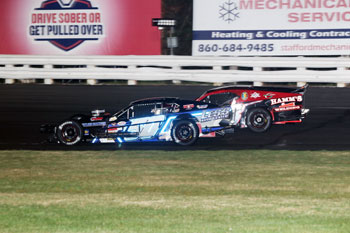 Williams will be looking to etch his name into the Stafford record books alongside some select company this season. From 1959-1986, there were a total of 18 different modified track champions with only 3 drivers, Bill Wimble, Geoff Bodine, and Richie Evans, able to go back to back in the track championship race. There have been several more back to back winners in the SK Modified® division with 5 drivers, Jerry Pearl, Mike and Ted Christopher, Bob Potter, and Rowan Pennink, taking consecutive SK Modified® track championships from 1982-2018.

“It took a lot to win the championship last season and I know a lot of guys will be hunting for us this season,” said Williams. “We need to be on top of our game and try to win races every week we come to the track and that will bring us to the championship. I have tremendous respect for everyone I race with and everyone knows how I race so I don’t expect much to change from last season except for the fact that we’re coming to the track now with a championship. Now that everyone on the team has had that feeling of winning, it makes us all that much more hungry to win it again. This year is a whole new year and there’s a new field of SK drivers so we just have to keep on the same game plan as last year and go for wins and stay consistent.”

Williams will also be looking to become the first driver to win the NAPA SK 5k in back to back seasons while the #50 team will be going for their third win in a row after winning the race with Chase Dowling behind the wheel in 2017.

“The 5k was probably the best race of the year for us last season,” said Williams. “With Adam’s guys having won the race the year before with Chase and with myself getting close to winning it in 2015, that was the race we all really wanted to win. That was a night that got us going on a tear with 5 podium finishes in a row and it was an unbelievable feeling to finally get a 5k win.”

Additionally Williams and the #50 team will be looking to get their 2019 season off to a good start with a good run in the season opening NAPA Spring Sizzler feature event.

“The Spring Sizzler is the most important race of the year every year to have a good start to the season,” said Williams. “The Sizzler is like the Daytona 500, you want to finish the race and you want to have a good finish. I know we’ll have a fast car that is capable of winning the race, we’ll have to see how things fall for us and hopefully we can put the car in NAPA Victory Lane.”

Williams will kick off his quest for back to back SK Modified® championships at the 48th Annual NAPA Spring Sizzler® on April 26-28. Tickets for the “Greatest Race in the History of Spring” are on sale now by calling the Speedway Box Office 860-684-2783 or online at www.staffordspeedway.com.