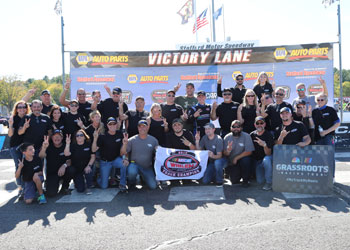 (Stafford Springs, CT)—Ronnie Williams and the #50 Les’s Auto Center team came into the 2019 SK Modified® season at Stafford Speedway ready to defend their championship. Williams and the #50 team recorded an impressive 5 wins, 13 top-5 and 18 top-10 finishes this season, but those impressive stats nearly weren’t enough. After 20 events and a long summer grind the SK Modified® points championship ended in a tie between Williams and Todd Owen with 840 points each. Owen won the final SK Modified® race of the season but Williams’ 5 wins to Owen’s 4 gave him the tiebreaker and a second consecutive championship.

“I can’t thank all my guys enough,” said Williams. “They worked hard all year long, the driver kind of put us in a little setback at the beginning of the year but the guys all believed in me and we won some races. It came down to the wire and Todd did what he had to do by going out and winning the final race but we also did what we had to do. I’m really happy to be the champion again this year. Thanks to Empower Financial, All Town Sanitation & Recycling, Flamingo Motorsports, Les’s Auto, Noonan Energy, Hamm’s Welding, Pettit for the awesome power, Centurn Machine, and NAPA of Tolland. We lost Cory Flowers and Bud Edmonds over the off-season so this is for those guys and hopefully we can come back and do it again next season.” 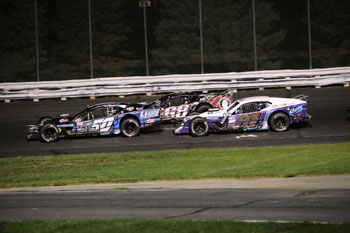 Williams’ defense of his championship didn’t get off to the best of starts. Williams was caught up in a last lap wreck in the very first race of the year as part of the NAPA Spring Sizzler® and he finished 18th on May 31 after losing a transmission during the race. At the conclusion of the first 8 races of the season, Williams was 6th in the point standings, 76 points behind Owen.

“I’ve always said the Spring Sizzler is the most important race of the season,” said Williams. “If you don’t have a good run in that race, you’re starting the next race in the back because of the handicapping and that leads into the following weeks. We were running 7th and overall not having a very good day and we got spun on the last lap and finished 17th because I put the car in a spot that it shouldn’t have been in. Then the night that Andrew Molleur won his first race, we were running third and probably would have had a least a top-5 finish, the transmission let go and we ended up finishing 18th. At that point we were 76 points behind so we had a lot of ground to make up and we had to be perfect for the remainder of the season.” 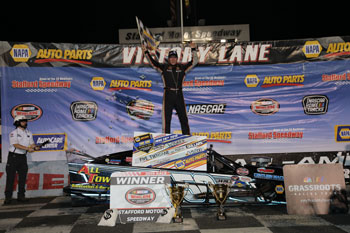 Williams’ march towards the championship began with the June 28 NAPA SK 5k. Williams became the first back-to-back winner of the 100-lap extra distance summer classic following a hard charge back through the field after getting caught up in a multi-car wreck on a lap-40 restart. The NAPA SK 5k victory set off a 5-race stretch that saw Williams finish in the top-3 each week. The strong summer run carved his deficit to Owen from 76 points down to 44 points. Over the final 12 races of the season, Williams never finished a race worse than 6th position.

“Every time I come to the racetrack with the #50 team, I feel like we have a good chance to win, it’s just a matter of if things fall our way or not,” said Williams. “In the 5k we were involved in a wreck around lap-40 and had 2 tires go down. When we came into the pits, we didn’t put stickers on the car, we used the tires from the previous week that probably had around 100 laps on them. I remember going into turn 1 on the first lap under green the steering didn’t feel quite right and I started thinking I was going to wreck at any second. Then we won, which was unbelievable and that race definitely turned things around for us.” 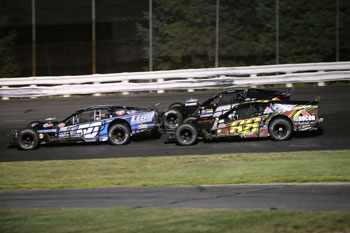 Williams’ performance in the second half of the season slowly chipped away at the point lead that Owen had built up eventually taking control of the point lead for the first time following his victory in the August 9th feature that also saw Owen finish 22nd after an early race wreck. Williams headed into the final race with a 6 point lead over Owen, meaning that if he finished fourth or better, he would win the championship no matter where Owen finished. Williams managed to finish fourth, but it was tough sledding for Williams as he didn’t get up to fourth place until there were 3 laps to go in the race and the 2019 season.

“The last race, I couldn’t seem to get into the right line,” said Williams. “For all the restarts we were lined up on the top and it just seemed like the top wasn’t going, which was odd compared to the rest of the season. I think that race was probably the most frustrated I’ve ever been in a car but my spotter Jerry does a good job of calming me down. It didn’t help to see that Todd got to the lead pretty early in the race. We went from 8th to 13th and he went from 9th to the lead in about 10 laps, so I knew there was going to be some tough competition getting through the field, we just needed to catch a break. The last restart with about 12 to go we started 7th and I followed [Michael] Gervais through the field and I was able to get by him with 3 laps to go.” 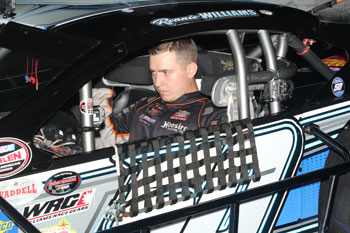 “That’s pretty crazy, I didn’t realize that no one has ever won three championships in a row in the SK’s,” said Williams. “You look at the back to back list and there’s some really great names like Jerry Pearl, Mike and Teddy Christopher, and Bob Potter. It’s hard to believe Teddy won 9 championships at Stafford but never 3 in a row. I think every year is a different year. Our first championship was a relief and this year was an awesome feeling and now we’re gunning for that same feeling of winning championships.”

Williams will officially be crowned the 2019 SK Modified® Champion at the 50th Annual Stafford Speedway Champion’s Awards Banquet, scheduled for Friday, November 15 at Maneeley’s in South Windsor. Tickets to the awards banquet are $50 and are on sale now. Tickets can be ordered by calling the track at 860-684-2783 or they can be ordered online at www.staffordspeedway.com.