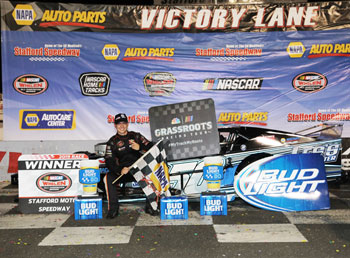 The Bud Light Open 80 took the green flag with Tommy Barrett, Jr.’s car immediately dropping off the pace and coming to a stop in turn 1 to bring the caution out before a lap could be completed. Matt Galko and Todd Owen were side by side on the restart with Galko taking the lead by a nose at the line at the end of lap-1. Keith Rocco was third with Eric Goodale in fourth and Michael Christopher, Jr. in fifth. Ronnie Williams was sixth with Anthony Sesely, Cam McDermott, Chase Dowling, and Joey Cipriano rounding out the top-10. Jeff Gallup came to a stop against the turn 4 wall with a flat tire to bring the caution out with 7 laps complete.

Galko took the lead back under green with Owen and Rocco side by side for second and Christopher and Goodale side by side for fourth. Things settled into line with Galko leading Owen, Rocco, Christopher, and Dowling. McDermott was sixth followed by Williams, Goodale, Cipriano, and Sesely. Williams took sixth from McDermott on lap-14 and Owen got by Galko to take the lead on lap-14. Sesely spun coming off turn 2 to bring the caution out with 30-laps complete and the order still Owen, Galko, Rocco, Christopher, and Dowling. 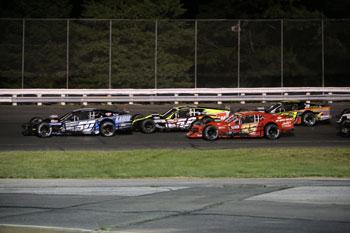 Back under green, Galko took the lead with Rocco, Christopher, McDermott, and Goodale lined up behind him. Anthony Flannery was up to sixth with Gallup, Owen, Kopec, and Molleur rounding out the top-5.   Rocco got around Christopher to move into second on lap-36 and began to apply heavy pressure to Galko for the race lead. Just behind the two leaders, Christopher and McDermott were having an intense battle for third. The caution flew with 41 laps complete for Schneider, who came to a stop backwards against the turn 3 wall.

This caution period saw Galko, Rocco, Christopher, McDermott, and Goodale all come to pit road for their two fresh tires and adjustments. The pit stops put Owen back into the lead with Flannery, Molleur, Kopec, Bakaj, and Williams into the top-3 rows for the restart.

Owen charged back into the lead on the restart with Molleur in second. Swanson was third with Williams getting by Bakaj to move into fourth. Bakaj and Kopec got together and spun in the middle of turns 3+4 to bring the caution out with 45 laps complete.

Owen took the lead with Swanson moving up to second and Williams to third on the restart. Dowling was fourth with Goodale in fifth. Molleur was sixth line followed by Galko, Rocco, Rufrano, and McDermott. Goodale took fourth from Dowling and Goodale was now challenging Dowling for fifth on lap-51. Galko completed the pass while Williams was starting to search high and low for a way to get by Owen for the lead.

Williams got a good run to Owen’s inside on lap-56 and he took the lead on lap-57. With 20 laps to go, the order was Williams in the lead with Goodale, Owen, Swanson, Galko, Dowling, Rocco, Christopher, Molleur, and Gallup making up the top-10.

With 10 laps to go, Williams was slowly stretching out his lead over Goodale in second while Swanson got by Owen to move into third. Dowling was now looking to get by Owen to take fourth with Rocco right behind Dowling. Dowling took fourth on lap-73 and Rocco took fifth from Owen on lap-74 as Williams continued to pull away. Williams’ advantage was erased by the caution for a spin by Kopec in the middle of turns 3+4 with 75 laps complete.

Williams took the lead on the restart with Goodale in second. Owen drifted up the track in turn 4 to lose a couple spots but the race stayed green until a multi car spin brought the caution back out with 76 laps complete.

Williams took the lead while Swanson pulled alongside Goodale for second. Swanson cleared Goodale on lap-78 with Rocco in fourth and Galko in fifth. Goodale and Swanson touched wheels with Goodale going through the grass and rejoining the track to keep the race under green. Williams led Swanson to the checkered flag to pick up the win. Rocco finished third with Galko and Christopher rounding out the top-5.