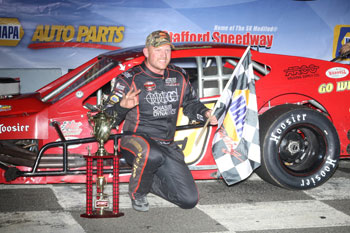 (Stafford Springs, CT)—The Valenti Modified Racing Series made its first of two visits during the 2018 season to Stafford Motor Speedway for the 5th Annual VMRS 80. Taking the checkered flag was Rowan Pennink, who started deep in the field and bided his time before making a charge to the front over the final 30-laps of the race.

Mike Willis, Jr. powered his way into the lead at the start from 2nd and he led the first 7 laps before Dave Etheridge moved to the lead. Jeff Gallup was third and he was closing in on Etheridge and Willis after Etheridge took the lead and he took second from Willis on lap-11. Gallup continued his charge to the front as he took the lead from Etheridge on lap-13. Woody Pitkat was up to fourth after starting 10th and Richard Savary was holding down fifth.

With 20 laps complete, the lead trio of Gallup, Etheridge, and Willis had built up a comfortable lead over Pitkat in fourth. Lined up behind Pitkat were Savary, Anthony Nocella, Sam Rameau, Keith Rocco, Joey Cipriano, and Anthony Flannery. The caution flew with 23 laps complete as Robert Bloxsom spun in turn 4 and Ron Silk’s car came to a stop on the backstretch after his car had dropped off the pace.

A melee broke out on the backstretch one lap after the restart that involved Cipriano, Rob Richardi, Les Hinckley, Flannery, Dan Meservey, and Derek Robbie.

Gallup took the lead with Willis right behind him on the restart. Pitkat made a power move going into turn 3 and he took third with Rocco and Etheridge behind him. Pitkat took second on lap-27 and he brought Rocco with him into third as Willis slid back to fourth with Etheridge behind him in fifth. Rocco took second from Pitkat on lap-29 and looked set to make a run at the lead but Gallup began to pull away from Rocco and stretch out his lead. The caution came out with 35 laps complete for a spin in turn 3 by Jimmy Dolan that erased Gallup’s lead.

Gallup took the lead on the restart with Pitkat getting by Rocco to move into second. Willis was fourth with Nocella running in fifth. Rocco got back by Pitkat on lap-38 to retake second while Gallup was starting to pull away again. Bloxsom spun coming out of turn 4 to bring the caution back out with 42 laps complete.

Rocco took the lead from Gallup on the restart and Pitkat got by Gallup to move into second. Pitkat then took the lead from Rocco on lap-44 with a slick pass in turns 3+4. Willis was still fourth with Nocella continuing to run in fifth. Rocco was now applying heavy pressure to the inside of Pitkat for the lead with Willis getting by Gallup to move into third on lap-47. Willis then took a look to the inside of Rocco on lap-49 but fell back into line in third while Pitkat continued to set the pace out front.

Gallup’s car looked like it was starting to slow down as Nocella took fourth on lap-54 and Donnie Lashua took fifth from Gallup on the next lap. Pitkat was stretching out his lead over Rocco, Willis, and Nocella with Rowan Pennink up to fifth with 20 laps to go.

Willis got loose on lap-64 and he slid back to sixth in line. Pennink was starting to come to life as he moved up to third on lap-66 and then took second from Rocco one lap later. With 10 laps to go, Pitkat had a nearly 3 second lead over Pennink with Nocella, Lashua, and Rocco making up the top-5. The caution came out with 71 laps complete for a spin in turn 1 by Robbie to set up a 9-lap dash to the finish.

Pitkat took the lead on the restart with Lashua nearly taking second from Pennink but he slotted back into line in third. Nocella was fourth with Willis in fifth and Etheridge in sixth. With 5 laps to go, Pennink was right on the bumper of Pitkat looking for the lead. Pennink was able to get to the inside of Pitkat with 3 laps to go and he was able to complete the pass with 2 laps to go. Pennink led Pitkat to the checkered flag to pick up his third Valenti Modified Racing Series win of the 2018 season in four races. Lashua finished third with Nocella and Willis rounding out the top-5.