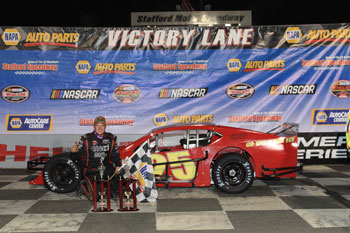 (Stafford Springs, CT)—The Valenti Modified Racing Series made its second of two visits during the 2017 season to Stafford Motor Speedway for the 8th Annual VMRS 80. Taking the checkered flag was Rowan Pennink.

Dave Etheridge took the lead at the drop of the green flag with Rowan Pennink working his way around Dave Schneider to take second. Dan Meservey, Jr. was third with Keith Rocco fourth. Schneider slid back to fifth and he lost fifth on lap-4 to Carl Medeiros, Jr. Blake Barney was on the charge early in the race, checking into the top-5 in the first 10 laps of the race after starting 12th.

Barney was now looking to the inside of Rocco for third and he took the spot on lap-14. Medeiros spun on the frontstretch but was able to get his car going and the race stayed green. Etheridge had pulled out to a slightly larger than a half second lead over Pennink, who now had Barney closing in on his back bumper as the field approached 20 laps complete in the race. Andrew Molleur spun in turn 4 to bring the caution out with 25 laps complete.

Etheridge resumed command of the race on the restart with Pennink holding off a challenge from Rocco to remain in second. Barney and Meservey were side by side for fourth place with Richard Savary in sixth, Sam Rameau in seventh, and Anthony Nocella in eighth. Kyle Trayner, Matt Mead, Steve Masse spun in turn 4 to bring the caution back out with 30 laps complete.

Etheridge took the lead back under green with Rocco taking second. Savary took third with Pennink sliding back to fourth and Barney was fifth. The caution came back out with 34 laps complete for a spin in turns 1+2 by Schneider.

Etheridge again took the lead with Rocco in hot pursuit. Savary was third with Pennink fourth and Nocella fifth. Just behind Nocella, there was a side by side battle between Barney and Donnie Lashua that Barney got the better of. Up front, Savary closed in on Rocco’s bumper and he was able to take second as the field hit the halfway mark.

Rocco lost third to Pennink on lap-45 and at the front of the field, Savary had closed the gap to Etheridge and was now right behind him in a fight for the race lead. With 30 laps to go the order was Etheridge, Savary, Pennink, Rocco, and Nocella. Trayner spun in turn 4 to bring the caution back out with 55 laps complete.

Savary got a good run in the outside lane on the restart to take the lead but the caution came out for spins in turn 3 by Molleur and Jeff Gallup, which negated Savary’s move and put Etheridge back up front for the next restart.

Sam Rameau came to a stop in turn 2 to bring the caution right back out on the restart.

The next restart saw the field complete one lap with Pennink taking the lead from Etheridge before the caution came back out for spins in turn 3 by Molleur and Mead.

Pennink took the lead on the restart with Rocco moving into second. Etheridge settled into third with Nocella fourth and Savary in fifth. With 10 laps to go, Pennink was still in command with Rocco, Etheridge, Nocella, and Savary all giving chase. Pennink looked to be on his way to victory but Geoff Gernhard spun on lap-79 to bring the caution out and set up a green white checkered finish.

Tony Ricci spun on the restart in turn 2 to bring the caution back out. Pennink took the lead on the restart with Rocco taking second. Pennink led Rocco to the checkered flag to score the victory. Nocella finished third with Etheridge and Jeff Malave rounding out the top-5.